"She can get away with many, many things simply by being transgender," Chadwick Moore said on Carlson's cable show 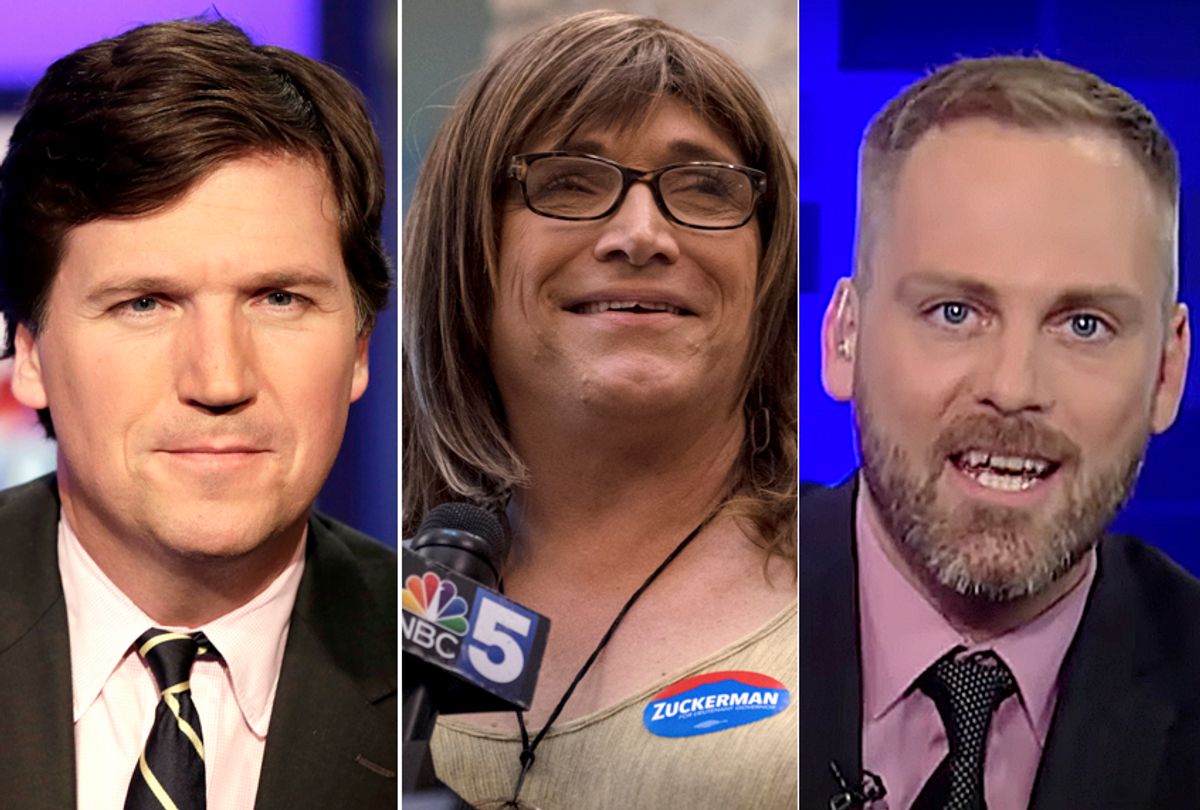 Wednesday's broadcast of "Tucker Carlson Tonight," Moore claimed that Hallquist had "transgender privilege," arguing the false claim that "she can get away with many, many things simply by being transgender."

"I mean, who knows if that's even how she won this primary," Moore continued.

When Robin Biro, the former campaign official for President Barack Obama who was Carlson's other guest in the segment, tried to address the "criticism" and discrimination that has been aimed at Hallquist simply because she is a transgender woman, Carlson shot him down.

Moore's comments became even more derogatory as he asserted that Hallquist's "transgender privilege" is why she was victorious in Vermont and "while the entire country is fixated on the fact that she's transgender, nobody knows anything about her policies."

Biro shook his head profusely throughout Moore's sweeping assumptions, and interjected when Moore claimed that no one knows about Hallquist's policies. "I do," he declared.

"Yeah, you know that she's for Medicaid for all, she's a climate alarmist, she believes in $15 minimum wage and that's kind of it," Moore continued.

"Not correct," Biro fired back.

But Moore continued with his offensive depictions of Hallquist, which focused on dehumanizing attacks on here appearance and not the substance of her politics.

"She was on CNN this morning, looking half dead, very low energy. She was on CNN this morning, and she couldn't even answer the question about what socialism is," he continued. "She said, 'I don't know what socialism is, I'm not qualified.' She was asked if she believed in capitalism, and she couldn't even answer that question. Who is this person? All we know is it's someone who's transgender, and let's just celebrate that? Can they lead the entire state of Vermont?"

Carlson, who appeared unfazed by Moore's incendiary statements about Hallquist, attempted to get both of his guests to connect anti-LGBTQ sentiments to Islam. The topic of conversation was entirely irrelevant to the conversation and yet a transparent ploy from the Fox News host to scapegoat Muslims.

"There are radical extremists in every religion," Biro said. "When you become radicalized regardless of your faith, I think that's a problem."

Carlson wasn't satisfied, claiming that there hasn't been a lot "Christian terrorism actually" in the U.S. or in Western Europe in the last 20 years, but "there's been a lot of Islamic terrorism."

"I don't understand this sort of left-wing LGBT obsession with Christians. I imagine a lot of it comes from — Hallquist talks about growing up in a Catholic school, and because he was an effeminate little boy — in his words — getting a bunch of garbage from the nuns and the priests," Moore said. "The difference between left-wing LGBT's and conservative and libertarian LGBT's is we can actually grow up and get over it and move on. And we don't still blame all of our problems on things that happened to us when we were children."

Moore's attack on Hallquist's appearance and qualifications was from unprecedented for the network, and it followed another incident Wednesday where "Fox & Friends" host Ainsley Earhardt referred to Hallquist as "that transgender." It is also far from the first time that Carlson has used his powerful platform to preside over attacks on transphobic Americans. Salon's Sophia Tesfaye discusses some of his past transgressions in the article "Is Trump’s transgender ban linked to Tucker Carlson’s spurious claims on child abuse?":

Just days before being hosted by the White House, Carlson was on Fox News’ airwaves openly linking the transgender community to “child abuse.” Hosting the president of the anti-LGBTQ group American College of Pediatricians (ACPeds) -- not to be confused with the American Academy of Pediatrics (AAP), a mainstream professional group -- Carlson quoted an article by his guest, Dr. Michelle Cretella, that featured this explosive charge: "Transgender ideology has infiltrated my field and produced large-scale child abuse."

Cretella told Carlson and his Fox News viewers that transgender adolescents are “being put on the puberty blockers which essentially castrates them chemically, followed by surgical mutilation later on. This is child abuse; it’s not health care.”

Annise Parker, the president and CEO of Victory Fund, the national organization that focuses on electing LGBTQ Americans to government positions, addressed the offensive remarks made on Fox News in a statement.

"For two straight cisgender white men on Fox News to bemoan 'transgender privilege' in a conversation about one of the few openly trans candidates in the entire nation requires extraordinary ignorance, at best," she wrote. "Christine was the chief executive of a well-respected energy utility company for more than 12 years and traveled the entire state sharing with voters her progressive vision for Vermont. They claimed Vermont primary voters know nothing beyond her gender identity while in fact the opposite is true – voters chose Christine because of her experience and positions, not because of her gender identity, and it is an insult to Vermont voters to say otherwise. To say trans candidates have 'privilege' is simply these two pundits spewing nonsense and hate – there are only 13 trans people in elected office nationwide, hardly a privileged group."

Parker, who is also the former mayor of Houston, also took on Carlson and Moore directly. "Tucker Carlson and Chadwick Moore built their careers on attacking people because of who they are and are as responsible as anyone for the degradation of American political discourse," her statement continued. "Their obsession with attacking a trailblazing trans candidate only continues this legacy. Vicious attacks on the qualifications and appearance of a gubernatorial candidate solely because she is transgender is intolerable and must be addressed by Fox News leadership. Fortunately, Vermont voters don’t carry the prejudiced views of some in the Fox News lineup."

Hallquist took to Twitter to respond to Carlson and Moore as well, turning the attention back to her many campaign issues.