A vegetarian goes to Transylvania: The case for breaking meat rules on vacation

I stopped eating meat years ago. Why? Who cares! But once I go through passport control, all menu items are a go 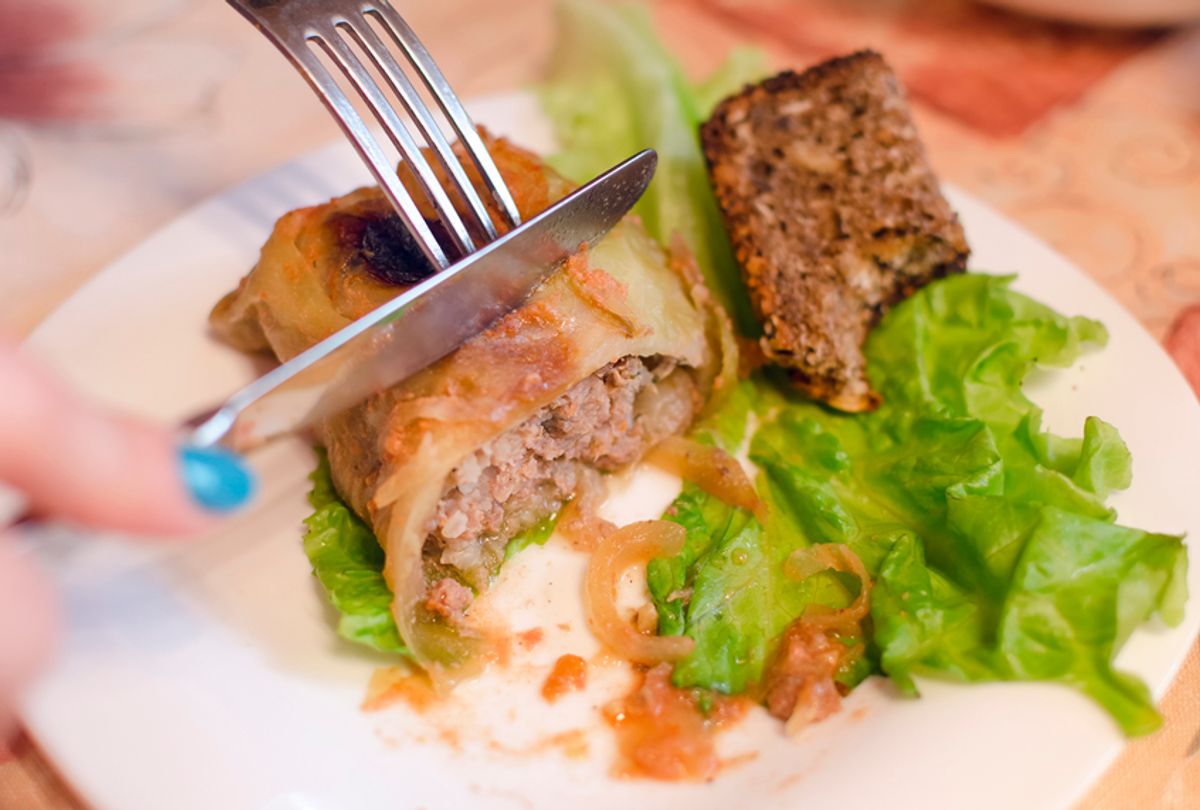 There is no conversation more boring to me than the one about why I don’t eat meat. The parsing of the differences between the followers of pescetarian, vegetarian and vegan diets, with a debate over the various merits of each, runs a close second. Seriously, please don’t ask. You don’t really care, and I’d rather talk about anything else. But there’s one part of my dietary preferences I’m more than willing to celebrate, and that’s taking a vacation from my food rules when I travel outside of the 50 states.

Because my rules are self-imposed — Michael Pollan is not a religious leader, though I'm sure there’s a tote bag claiming otherwise, and any health reasons I might cite are purely preventative — I’m free to decide when and where I give myself meat amnesty, and for me, that line is the “All Passports” queue. It’s not that part of planning every trip doesn’t involve Googling “how to eat vegetarian in [insert country here]” — and it’s not as if avoiding meat is impossible, or even a hardship, for many itineraries. But when I travel to other countries, I want to step outside of my usual routines and experiences, and authentic local cuisine is one of the easiest and most accessible paths.

I realize many people can visit Spain and cheerfully pass on a comparison taste test of a variety of Jamón slices — Serrano, Ibérico and Bellota, perhaps — but I’m not one of them. When it comes to food, my FOMO is strong: if my travel partners are swooning over the ground beef-stuffed piononos at a roadside food shack on the Puerto Rican coast or the lechona in a Bogotá food hall, I’m not going to be left wondering what all the fuss was about. I didn't come all this way just to look and not taste.

So that’s how I found myself in Munich's Hofbräuhaus on a rainy July Sunday, eating what was definitely the worst sauerbraten I’ve ever had. My stepfather is a born and bred Bavarian carnivore and while his kitchen repertoire might be severely limited, his signature dishes are transcendent acts of meat worship, and he rolls his eyes at my usual diet with a corresponding dose of skepticism. This is a dish that I find very difficult to order to satisfaction in the U.S. outside of his kitchen. Even whatever the usually reliable Alton Brown is doing with his recipe for sauerbraten — raisins, Alton? really? — is not it.

The sauerbraten I grew up with is a deceptively simple harmonic blend of acidity and sweetness, marinated for just long enough that the acid of the wine vinegar renders the beef so tender it wants to melt in your mouth, resulting in a pot roast so perfect it can only be improved by swapping out beef for rabbit. Serve in a gravy made from its liquid and add a kartoffelknödel — those gutbuster potato dumplings I can’t help but love — on the side to soak up the sauce. Unfortunately, either the acid or the heat worked too long on the Hofbräuhaus beef, which ended up being kind of tough. There's a risk in breaking the meat rules for anything less than perfection, especially from a high-traffic tourist kitchen like theirs — you can end up eating a regret meal that only reminds you why you usually avoid meat in the first place. (The pretzels and beer were excellent, though.)

Can you eat well as a vegetarian or vegan in Munich? Sure! Did I want to? No, see above! Subsequent forays into Münchner carnivory garnered more satisfying results. A quarter of a roast farm duck at a bustling traditional joint near the Frauenkirche restored my faith in city center cooking. An order of ribs shared at the Königlicher Hirschgarten biergarten, located so conveniently near our hotel, were a messy delight. My midmorning snack of weisswurst, slurped through a slit in its casing in the shadow of Neuschwanstein castle, was better than anything served in its own miniature tureen of hot dog water at a tourist trap café has a right to be. (The awful snack shack chicken sandwich gulped down before the two-hour train ride back to Munich? Another regret meal.)

But the second leg of our trip — we flew into Sibiu, Romania, and drove through the Transylvania region for four days, visiting castles and Saxon villages and absorbing absurd vampire lore — promised new food experiences that wouldn’t have to compete with childhood memories.

You can go meat-free in the historical outposts of Transylvania. Outside of Lent, however, it might be harder than you want to work while on vacation to seek out delicious and balanced meals in restaurants that also include a variety of vegetables. Certainly I took advantage of Gogoseria Veche’s walk-up window in Sibiu’s Old Town and packed away a ginormous circle of fried dough flattened, folded in half, and stuffed with telemea, a tangy, semisoft brined sheep’s milk cheese. At a roadside kiosk outside of the Brâncoveanu Monastery we found a similar fried dough situation called Langos, this time stuffed with fresh sour cream, garlic and grated cașcaval, a local mild cheddar stand-in. These were both cheap, filling and easy to split, but a bit too much like the Transylvanian version of State Fair dining to be more than an occasional walk-and-snack treat.

Pizza joints, a reliable mainstay of meatless options, are plentiful, especially in touristy places like Bran, where the Castle's dubious connection to the Dracula myth is exploited rigorously and without compunction. In Sibiu in particular we found solid upscale Italian fare, too, at Max's just outside of Old Town. But did we white-knuckle our way through the Carpathian mountain switchbacks to the “Dracula Untold” soundtrack to play it safe with wild mushroom tagliatelle? We did not.

Give me instead the wild-tasting Dacian stew, the house’s spin on the regional mainstay tochitură, at the restaurant in the Central Park hotel in the living fairytale of Sighișoara — actual hometown of one Vlad Țepeș, with the statue and a live man in a Walgreens-level vampire costume who sits up in a coffin and goes “aaaahhh!” at you when you walk into the room in which the Impaler is said to have been born — a slow-cooked garlicky delight of tender pork, veal and smoked sausage, with a generous dollop of mămăligă cu brânză și smântână, the ubiquitous Romanian version of polenta, topped with sheep's cheese and sour cream, with a fried egg nestled in its center, dill pickle spears ringing the shallow bowl offering the perfect acidic garnish. Give me an order of sarmale, delicate pickled cabbage rolls stuffed with pork and rice, with mămăligă served scooped into tennis balls, in the medieval-inspired restaurant Unglerus in the UNESCO-preserved Saxon village of Biertan, located in a 17th century building at the foot of the fortified church that keeps watch over the farmlands below. There's something meaningful about connecting to the history of a place not only through appreciating the architecture and language, but the cuisine too.

Mămăligă in some form accompanied most of the traditional Romanian dishes I ordered, much like the stalwart knödel might in Bavaria. I think the best I had — maybe it was the incredibly fresh sour cream and exquisite cheese — came as prelude to a crispy roast duck leg at Carol Gastro Bierhaus, a German-inflected restaurant at the base of stunning Peleș Castle, where our snarky tour guide was well worth the price of admission and the chaotic queueing system to get inside. The bottom line on mămăligă is if you need to avoid meat but don’t mind living off corn meal and dairy for the duration of your stay, Romania will provide. For me, it's not enough — I want to taste everything, for as long as my leave from my regular life will allow.

Wash dishes like these down with a bottle of Fetească Neagră, a dry indigenous red. Romania is a large wine producer, and quite a decent one, but you wouldn’t necessarily know it by its reputation as a workhorse during the Communist era when quantity was encouraged over quality. That's changed, especially over the last decade as a new guard has invigorated the wine industry. Reputation hasn’t quite caught up to the actual quality available, and that plus a favorable exchange rate for the U.S. dollar means quite good bottles can be had at everyday prices. For hot summer days there’s always a local lager too, with Ursus and Timișoreana (owned now by Ursus, but dates back to the 18th century) available pretty much everywhere.

If I spent more time on vacation abroad than I do, I might be more strict about what I eat. I know I'm fortunate to have a flexible stomach — sudden pork doesn't faze me — and I'm also blessed with the ability to go right back to abstention once I pass through customs on the way home. I'll claim a small meat amnesty once a year or so — whether that's thanks to having the resources to travel outside of the country, or just to my parents' house — and happily go without at home. What happens in Transylvania can stay in Transylvania, at least until I can source the right cheese for my newly acquired polenta habit.