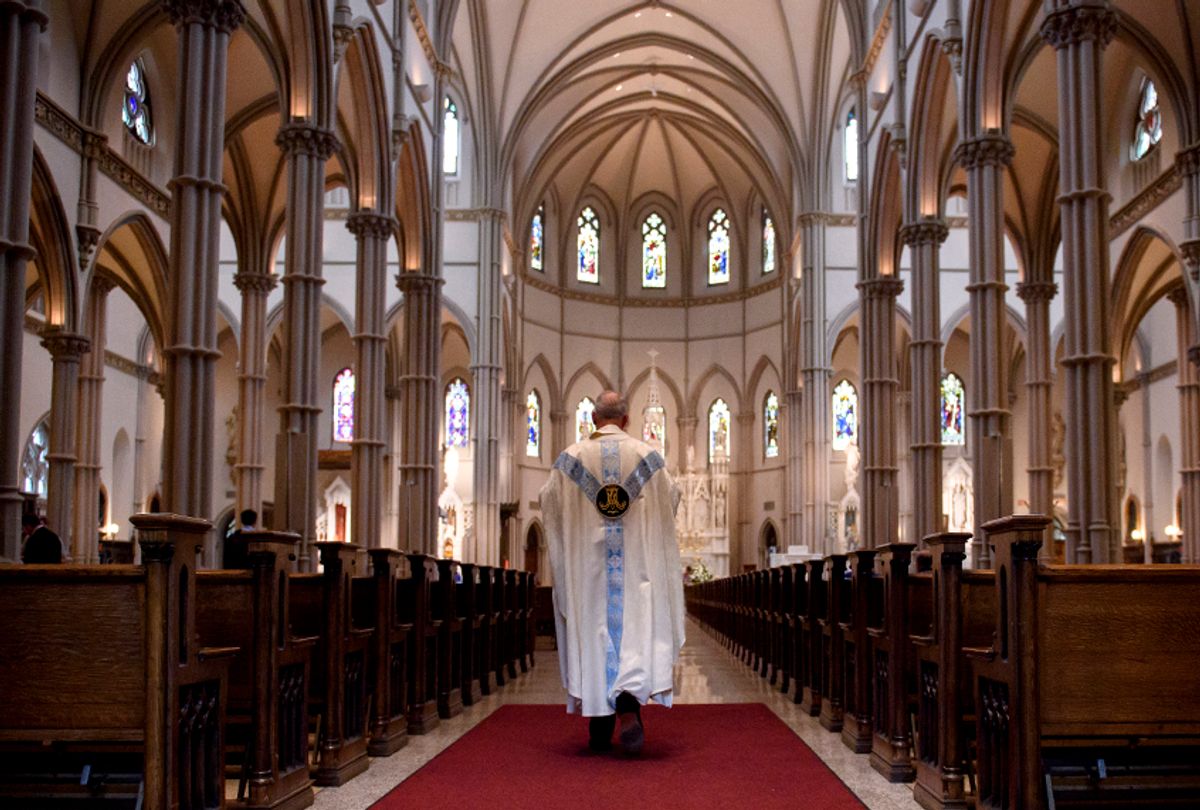 Father Kris Stubna walks to the sanctuary following a mass to celebrate the Assumption of the Blessed Virgin Mary at St Paul Cathedral, the mother church of the Pittsburgh Diocese on August 15, 2018 in Pittsburgh. (Getty/Jeff Swensen)
--

Let us pretend, hypothetically, that a secular institution was discovered to have protected more than 300 pedophiles as they sexually abused more than 1,000 victims over a period of roughly 70 years.

Not the Catholic Church, mind you: Most people already know that a recent grand jury report discovered that more than 300 pedophile priests managed to destroy the lives of more than 1,000 children (the number is likely severalfold higher than that) in Pennsylvania, the state I call home, since 1947. While this is certainly one of the most severe cases of priest pedophilia to come out since the stories first began emerging on a mass scale in the early years of the 21st century, it has been joined by so many others that I suspect our society has become used to it. We're still morally outraged, to be sure (as we need to be), but the sheer bizarreness of the situation hasn't sunk in.

If the Catholic Church wasn't a religious institution, would we be handling the situation differently?

"They would have been arrested under the RICO federal laws already and they would have been considered organized crime," Pennsylvania State Rep. Mark Rozzi, a Democrat, told Salon. Rozzi is more than just a proponent of passing new legislation to help victims of childhood sex abuse, whether from employees of the Catholic Church or other organizations; he is also a victim himself, one who was raped by a priest in a rectory shower in Pennsylvania when he was 13 years old.

Although Rozzi still identifies as a Catholic and is proud of his Catholic heritage, he acknowledged that the Catholic Church's attempts to thwart legislation that would protect future victims could be interpreted as a blurring of the separation between church and state.

"That's a real possibility," Rozzi told Salon. "There's no doubt that the Catholic Conference, the legislative arm of the Catholic Church, is out there spending millions. The last time the bill passed the House with the retroactive component in it and went to the Senate, they hired 39 lobbyists to work 50 Senators. How do victims even compare to that?"

His disappointment in the behavior of the Catholic Church's leadership was echoed by one of his Democratic colleagues in the State Senate.

"As a Catholic, I am extremely disappointed in the conduct of the leaders of the Catholic Church set forth in the report," Sen. Lisa Boscola told Salon by email. "The deliberate concealment of abuse coupled with allowing the abusers access to more victims is inexcusable. Exposing this conduct to the public is an important step in making certain that those institutions entrusted with our children understand their first and foremost duty is to protect them."

Boscola also said that the grand jury report prompted her to circulate a co-sponsorship memo and start drafting legislation that would "amend the law requiring the reporting of abuse on a minor to include language clarifying an obligation to report on an individual whom exhibits a pattern of abuse and/or is likely to commit additional acts of child abuse" as well as "require all non-disclosure agreements include language that would permit signatories to the agreement to cooperate with law enforcement or prosecutors regarding criminal activity by one or more parties of the agreement at their choosing."

Rozzi also detailed the state of the current legislative efforts.

"We do have Senate Bill 261 tabled on the House floor right now and that's the vehicle that we're going to use to make any changes," Rozzi said. "I've been in discussion with the Majority Leader, who said he will call up Senate Bill 261, and then he's going to allow us to amend it and then put the language from the recommendations in the bill. So we would definitely look to eliminate the criminal statute of limitations moving forward and also put in the two year window to give those two years back to the victims who were named in this report to have the opportunity to go into a civil court of law and file a civil lawsuit against the perpetrator or the institution that protected that perpetrator."

Yet, as Rozzi pointed out, the Catholic Church has already started fighting SB 261 and other legislative measures — a move that contradicts the church's frequently stated position of sympathy for the victims and a desire to stop future abuses.

He added, "I know I can get this bill out of the House of Representatives. The House will do the right thing and support victims of childhood sex abuse. Not just from clergy, but all victims. I think we will do what's right and then it's going to be up to the Senate. And if the Senate wants to protect pedophiles and the institutions that are putting our children at risk, that's going to be on them. But that means they're going to have change our bill and send it back, and we might change it right back and send it back to them. We're not walking away here, myself and victims, without some retroactive component in this bill, period."

To be fair, it isn't only the Catholic Church that comes out against legislation like SB 261. As I talked to Richard Grucela, a former member of the State House of Representatives, he made an important observation about the political culture in Harrisburg, Pennsylvania's capital, particularly as it pertains to another lobby that can be expected to oppose tough reforms — the insurance lobby.

"The insurance lobby guy is still the same guy. He's still there. And he's tough. I know he's a tough cookie. He opposes anything that would ever cost the insurance company a nickel," Grucela mused to me as he recalled his days in the State House.

"I suppose that's what they pay him to do?" I replied, playing devil's advocate.

"They do, but you know what? I guess they do, but don't you have to have a heart somewhere? I mean, I told him this," Grucela recalled. "I had a bill to protect, not to protect, but the insurance companies would provide insurance coverage for kids with hemophilia. I had a young man in my district, a child with hemophilia, and I actually got it through the House with some compromising and stuff. And this is what often happens in Harrisburg — and it's why I supported a unicameral legislature in the state, not in the federal government, but I thought Nebraska had a great model, and I actually had a bill in there for unicameralism — a lobbyist will sometimes for political reasons allow passage of a bill in the House or the Senate and then turn around and defeat it in the other chamber. And that's what they did to me."

He added, "And I know that's the game, but I'm thinking to myself: I don't know if I would take a job like that. I guess they get paid to do that, but sometimes you have to have a heart, don't you?"

It's expected that the insurance lobby might be at odds with stricter policies that protect the sick and otherwise vulnerable. But what does it say about our political culture that we have to worry about the absence of a heart not just from insurance companies, which we expect to be craven even if we don't condone it, but also from the Catholic Church, which tends to human souls as well as their bodies?

As a native Pennsylvanian, my mind instinctively wanders to one of my favorite quotes. The historian Henry Adams once observed, when writing about the United States in the year 1800, that "had New England, New York, and Virginia been swept out of existence in 1800, democracy could have better spared them all than have lost Pennsylvania." Part of the reason he felt this way was that Pennsylvania — which had been founded as a secular colony by William Penn in the 17th century — had managed to maintain its inherently secular and proudly democratic institutions through subsequent years.

As Pennsylvanians grapple with this crisis that has impacted so many of our children, it is important for us to remember the significance of our political heritage. We are a state that encourages all forms of religious worship and non-worship — Catholic and Protestant, Jewish and Muslim, Buddhist and Hindu, agnostic and atheist, you name it — but we also believe, as part of our founding philosophy, that no religion has the right to warp the institutions of our government in order to protect its own interests over those of the individual.

If the Catholic Church can thwart good legislation like SB 261, it will prove that the power of a religious lobby matters more than Pennsylvania's own fundamental principles.

Salon talks to the woman who founded the Me Too movement in 2006.