Asia Argento, sexual assault accuser and accused: One #MeToo story doesn't cancel out the other 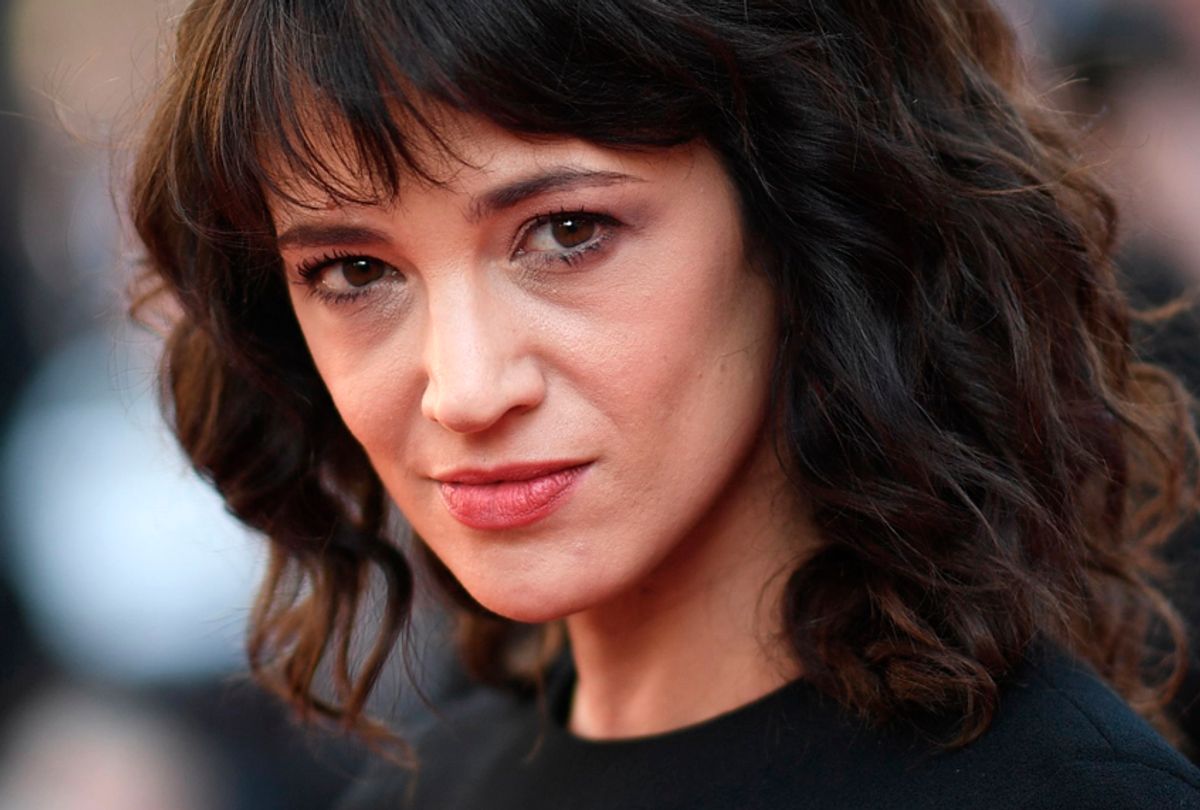 A young, aspiring actor, alone in a hotel room with an older person who piles on the praise — and maybe some alcohol. A #MeToo moment with a twist.

Life rarely provides us with clearly drawn heroes and villains. It'd be so much easier if it did. There's a good chance in the past few years you've been outraged by a politician you've voted for and had to grudgingly nod your head in agreement with one whose policies you otherwise find outrageous. You've maybe likewise wrestled with what to do about an actor or director or comedian, whose work has meant something important to you, who's been accused of misconduct. And maybe today, you're asking yourself what to make of a leading light of the #MeToo movement who now stands accused of sexual abuse herself.

It's been almost a year since Italian actress Asia Argento emerged as one of the strongest voices in the case against Harvey Weinstein. Last October, her explosive revelations of an alleged rape helped burst the dam on how workplace harassment and abuse are talked about and handled. Now, The New York Times reports that she recently settled a notice of intent to sue filed by 22-year-old actor Jimmy Bennett, stemming from his claim of "a sexual battery" that occurred in California when he was 17. (The age of consent in California is 18.) The Times reports Argento paid out $380,000.

Argento's and Bennett's individual accounts have eerie echoes of each other. In Ronan Farrow's revelatory 2017 New Yorker feature on Weinstein, Argento said that in 1997, when she was 21, she was invited to what she believed was a party at the mogul's hotel on the French Riviera. Instead, Weinstein greeted her alone. Initially, he was warm, praising Argento's work. She said things changed when he requested she give him a massage, then "pulled her skirt up, forced her legs apart, and performed oral sex on her as she repeatedly told him to stop." But then, in her shock and fear, she says she became submissive. "The thing with being a victim is I felt responsible," she said, calling the incident a "horrible trauma." She told Farrow that oral sex was still "ruined" for her. "I’ve been damaged," she said. "Just talking to you about it, my whole body is shaking."

Yet in a scenario familiar to many survivors, Argento has said that for years she still stayed in touch with Weinstein, even having multiple subsequent sexual encounters because she felt she "had to" and that she considered herself "obliged." In May, Argento spoke at the closing ceremony of the Cannes Film Festival, saying, "In 1997, I was raped by Harvey Weinstein here at Cannes. I was 21 years old. This festival was his hunting ground."

Argento's most steadfast supporters over the past several months included fellow actor and activist Rose McGowan and Argento's boyfriend, the late Anthony Bourdain. On "The Daily Show" last winter, Bourdain said, "I met one extraordinary woman with an extraordinary and painful story, who introduced me to a lot of other women with extraordinary stories and suddenly it was personal."

Argento first encountered Jimmy Bennett when she played his mother in 2004's "The Heart Is Deceitful Above All Things," when he was seven. (In the film, directed by Argento, the son is later raped by one of his mother's boyfriends.) In May of 2013, Bennett was in Marina del Rey and, with a family member, met up with Argento at the Ritz-Carlton. Documents sent anonymously to The New York Times include a selfie of Argento and Bennett in bed dated May 9, 2013. The alleged encounter took place that day, after Argento sent the family member away. Vanity Fair reports, "He says she gave him alcohol, showed him notes that she had written for him, and then began kissing him. She then removed his pants and performed oral sex on him. They proceeded to have intercourse, after which Argento asked Bennett to take photos." In her Instagram posts from that period, Argento refers to Bennett repeatedly as "my son."

Filing the intent to sue back in November, Bennett reportedly requested $3.5 million in damages from "the intentional infliction of emotional distress, lost wages, assault and battery." The papers claim the event "precipitated a spiral of emotional problems that hindered Bennett’s work and income and threatened his mental health." The letter was sent to Richard Hofstetter, the attorney shared by Argento and Bourdain.

Since the developments in the Argento story dropped on Sunday, the hot take factory has been working overtime on all sides. It stands to reason — the obvious potential for hypocrisy here is tremendous. The past year has brought a slew of revelations about men long considered allies, or the very least, not active predators. Now, when a famous man's name is trending on Twitter, the first logical question seems to be, "Did he die or has he been accused of being a sexual abuser?" But the Argento story is far more dramatic — one in which an accuser, and a female, is recast in the role of possible assailant.

On Twitter Monday, Rose McGowan issued this cautious statement: "I got to know Asia Argento ten months ago. Our commonality is the shared pain of being assaulted by Harvey Weinstein. My heart is broken. I will continue my work on behalf of victims everywhere. None of us know the truth of the situation and I’m sure more will be revealed. Be gentle." Last November, McGowan's message on Twitter was "1) Believe survivors 2) Apologize for putting your careers and wallets before what was right. 3) Grab a spine and denounce." Gentleness optional.

Another Weinstein accuser, Rosanna Arquette, went further, saying, "Stop until you hear all the facts this a set up. I know many many rape and trauma survivors who act out sexually The wounds they carry run deep. I pray for them. the timing of this story is suspect. Asia was still raped by Harvey Weinstein." [sic]

That response is reminiscent of one The New York Times reported on last week, in which feminist scholar Avital Ronell was accused of harassment, assault and stalking by a male former graduate student at NYU. After an investigation, the university concluded there was insufficient evidence of assault but that her behavior was "both objectively and subjectively sufficiently pervasive to alter the terms and conditions of Reitman’s learning environment."

The university suspended Ronell, whose male and female academic defenders soon wrote in defense of her "grace, keen wit, and intellectual commitment," and asked she be "accorded the dignity rightly deserved by someone of her international standing and reputation." Because the old "but they're so talented, and they were always nice to me" argument knows no gender.

Meanwhile, on the other side of the coin, there's been the almost gleeful eagerness to question whether the Argento development reveals a flimsiness to the whole #MeToo movement.

The LA Times has already asked, "Do the claims against Asia Argento invalidate the #MeToo movement?" And while the verdict is that "It does not invalidate Argento’s claims against Harvey Weinstein; a person can suffer one abuse and perpetrate another," Melissa Batchelor Warnke writes, "It does make the #MeToo movement more vulnerable to bad-faith attacks by those who’d see it fail regardless." A Breitbart pundit has unsurprisingly declared this as evidence that "They are the very thing they say they hate, in every instance." And of course, the phrase "war on men" has come up as well.

Argento has yet to comment on the accusations or the settlement, but in the meantime, this would be a good moment to believe in the existence of more than one possibility at the same time. A person who has been abused can be an abuser. A person who has survived can inflict hurt. And the question, "How would we be talking about this if the genders were reversed?" is handy in so many situations in life.

#MeToo has never been just about women or about one form of harassment or abuse. It's about having real and often difficult conversations about the dynamics of power and the repeating cycles of exploitation so that we can work to improve things. It's about giving men's claims the same weight and respect we give women's. It means acknowledging there is no one typical abuser and no typical victim. Because, seriously, don't we all know enough about how rape culture operates not to make presumptions about who does and doesn't fit in a particular role? The Bennett story isn't an undermining of #MeToo. It's an example of why it's so necessary.

If Argento was simultaneously working out a payment to a young man she abused when he was underage while she was speaking in public solely as a survivor, that is wildly horrifying, and she should face exactly the same professional and personal consequences as any other predator. If that's not what transpired, let's talk about what did, between a teenager and a person twenty years his senior. And whatever the full facts of the Argento matter, Harvey Weinstein's sex trafficking suit is moving forward, and 87 women have accused him of harassment and assault. Whatever else happens, men who say they have been harassed and assaulted deserve to be taken as seriously as women making similar claims have fought for decades to be. This isn't hard to figure out.

Many things can be true at the same time. They don't cancel each other out. Instead, if we're willing to do the work, they strengthen the cause of justice. Real honesty and responsibility, for all, is the only way forward, for all. "There are those who still have to be held accountable," Argento said in May. "You know who you are. But most importantly, we know who you are. And we're not going to allow you to get away with it any longer."

"Everyone has cruel urges"

#MeToo movement and the dark side of humanity