"You testified after four Americans are killed in Benghazi to cover for Hillary Clinton's incompetence," Pirro said 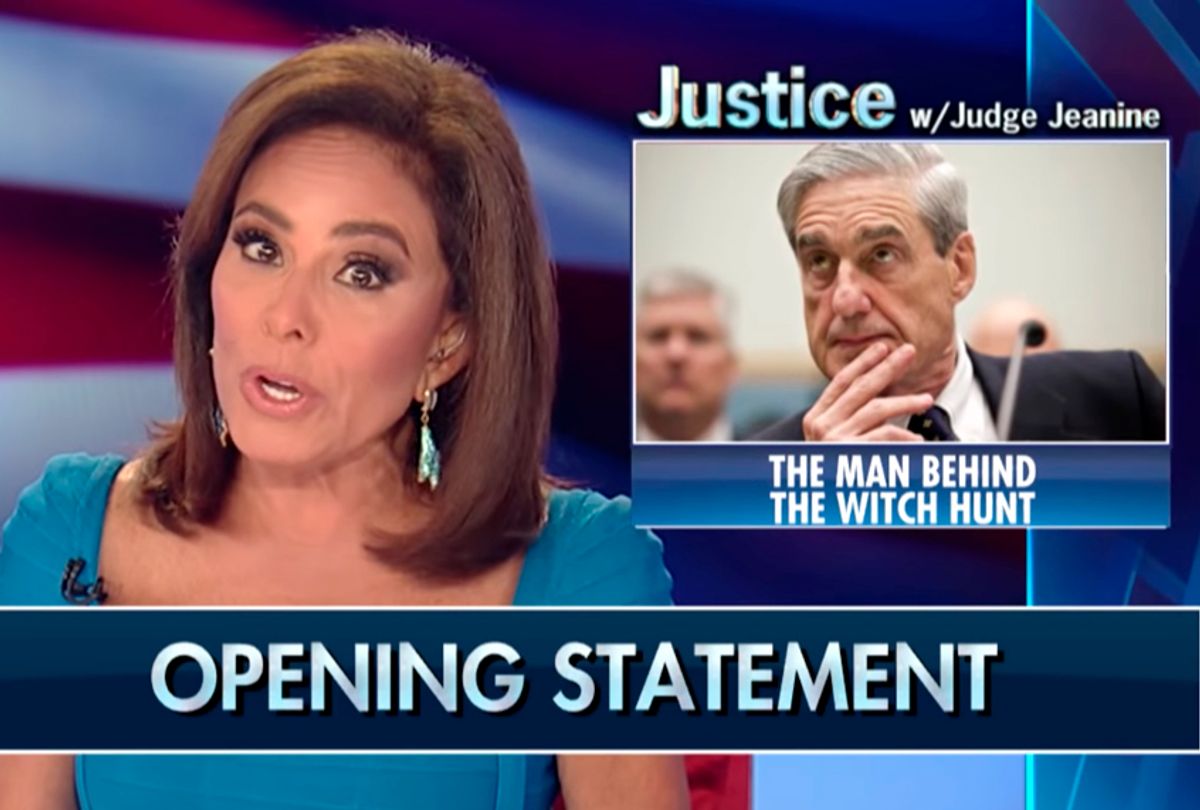 Judge Jeanine Pirro kicked off her weekly Fox News program on Saturday with a venomous attack aimed at special counsel Robert Mueller by baselessly implicating him in the Republican Party's favorite conspiracy theory – the deaths of four Americans in Benghazi.

Comparing the lead investigator in the Russia probe to the mafia "cleaner" played by Harvey Keitel in the Academy Award-winning film "Pulp Fiction," Pirro said, "When things go terribly wrong and a crime scene clean up is needed, the mafia calls in the cleaner – the one who disposes of the body after the hit or covers up the evidence after the crime."

As Pirro alluded to, the most famous "cleaner" in American popular culture is "Pulp Fiction's" Winston Wolfe, who was expertly portrayed by Harvey Keitel in the Quentin Tarantino film.

"When covert missions go wrong, the government calls in its own 'cleaner,'" the Fox News personality said at the top of Saturday night's episode of "Justice with Judge Jeanine."

She continued: "And when things go terribly wrong for the Democrats, they don't just call in a 'cleaner' to get the job done. They call in someone who's been in the cleanup business for a long time. They call in the 'serial cleaner.'"

Without offering evidence of her grand conspiracy theory, Pirro then unveiled the Democrats' "serial cleaner" to be none other than Robert Mueller, the former Republican FBI director turned special counsel investigating Russian interference in the 2016 election:

Pirro then sorted through a laundry list of "Trump-hating deep state" conspiracy members, including Bruce Ohr and Christopher Steele, offering up "evidence" that the commander in chief was being framed in an orchestrated cover up. The Fox News host also expressed great sympathy for Paul Manafort, Trump's 2016 presidential campaign chairman. A federal jury began its third day of deliberations Monday on 18 counts of financial crimes, including bank fraud and tax evasion.

"You actually had a 70-year-old man, Paul Manafort, put in solitary confinement 23 hours a day on a 2007 tax case having nothing to do with Donald Trump or Russian collusion because you're trying to get him to rat on the president of the United States," Pirro bit squarely at Mueller.

According to Pirro's fake news-fueled monologue, Mueller's ultimate clean up job was, of course, none other than Benghazi – the ultimate GOP red herring.

"Bob, honestly, you look and sound like a fool. CNN and just about every newspaper in the country in the world got there," the judge continued. "They made it there but the FBI couldn't. Hey, I get it, a good 'cleaner,' Bob, wants the crime scene as trampled as possible."

In conclusion, Pirro offered that Mueller was "panicking" because he has "nothing" on Trump. However, Pirro seemed to have "nothing" on Mueller either, except a lot of hot air – and possibly a DVD rental of "Pulp Fiction" to return to her local Red Box.