The search for Hurricane Katrina survivors: Door to door in St. Bernard Parish 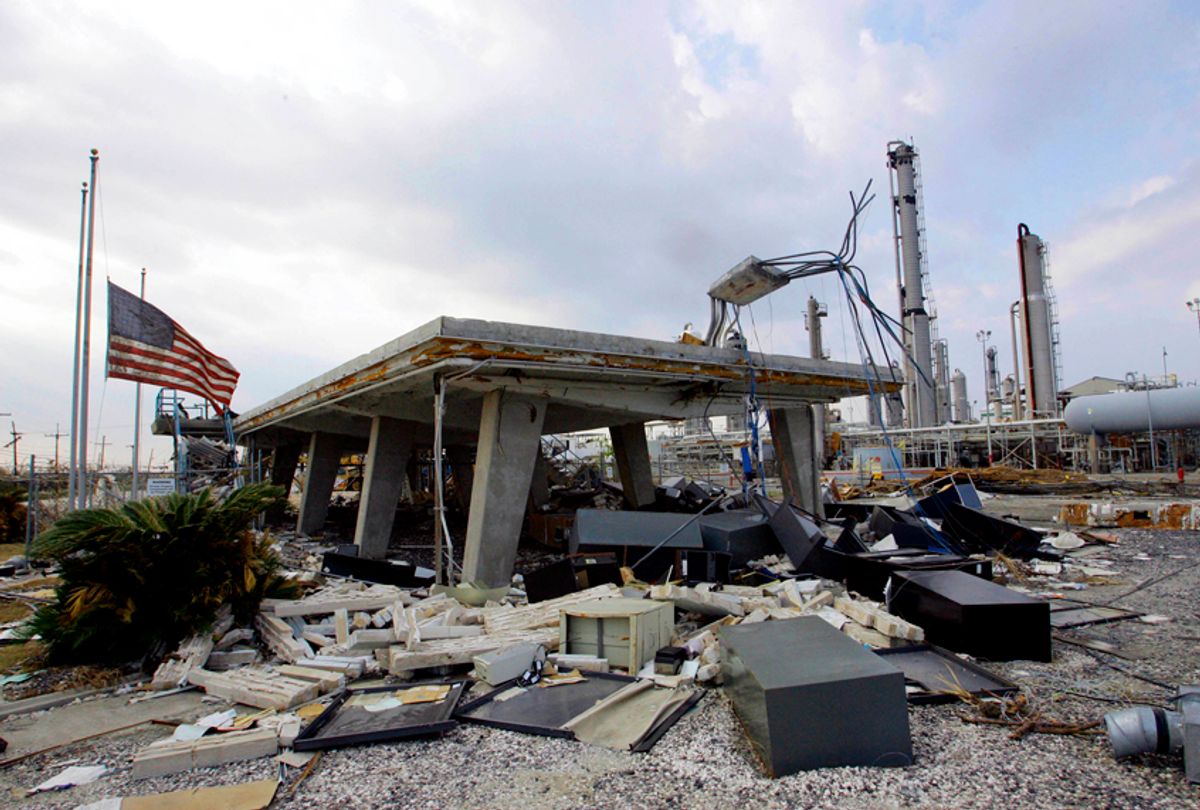 Excerpted with permission from "Riding through Katrina with the Red Baron's Ghost" by J. Malcolm Garcia. Copyright 2018 by Arcade Publishing, an imprint of Skyhorse Publishing, Inc.

The catastrophe of Hurricane Katrina feels like ancient history these days. Not to me, however. I covered the consequences of the storm as a reporter and found an emotional and professional center in the Gulf Coast for one reason—a man who had been a mentor to me was lost in the hurricane. I went to New Orleans to find him, my real reason for requesting the assignment. This excerpt from my collection of essays, "Riding Katrina with the Red Baron’s Ghost: A Memoir of Friendship, Family, and a Life Writing," begins with my arrival in New Orleans about two weeks after Katrina struck.

“Who you looking for again?” firefighter Roy Howard asks me.

I’m a reporter riding in the back of a pickup with Howard, hanging on to the tailgate as we bounce and crunch over fallen tree limbs and piles of debris. We’re looking for survivors of Hurricane Katrina. Since just after Labor Day, Howard and about fifty other Georgia Search and Rescue firefighters have trudged house to house in St. Bernard Parish, just east of New Orleans and one of the neighborhoods hardest hit by Katrina. They have knocked on doors and, more often than not, broken them down as they searched for survivors. We have found six people. Many stayed because they had no other place or families to go to. Others wouldn’t leave because it was their home, had been for years, and that was reason enough.

None of them knew what they would face by remaining. Katrina’s winds slammed the parish, but a storm surge of more than thirty feet inflicted the deadliest damage. It swept over levees, tossing boats on top of houses as if they were toys, and devastated much of the low-lying parish of about seventy thousand people.

Among the missing is my friend Titler. Our long correspondence inspired me to ask questions, the first step down a road that would lead to a journalism career and into this pickup.

“The level of how everything was destroyed gets to you,” says Howard, a tall, broad-shouldered thirty-seven-year-old from Garden City, Georgia. “As a firefighter I’ve seen a lot of damage, but not to this degree. You known this Titler a long time?”

Howard shoots me an arched eyebrow, but before he can get off another question, we stop at a bright yellow house on Angela Avenue. I follow six firefighters out of the truck. Dead quiet. Our footsteps are the only sounds. The avenue and the yards around us are caked with drying mud. A metal plate on the door indicates the owner has a medical condition, but nobody’s home.

Another firefighter presses his ear against the door.

I look through a window at a large shadow expanding and shrinking, moving through the gray light. I step back.

“It’s definitely not little,” I say.

Howard raises a maul, hesitates. He runs the tips of his fingers against the looping, curved designs of the wooden door. Old, 1930s or thereabouts, he says. But he knows that if something is alive inside, he has no choice but to break it down. As Howard examines the door, another firefighter, Ned Dixon of Byron, Georgia, jimmies the back door with a crowbar. A bandana sporting the American flag is dark from his sweating forehead.

He lifts the maul again and swings.

The door cracks off its hinges, sags inward, and gives way. The claustrophobic stench of rot and mildew washes over us like foul breath, followed by some kind of pit bull or Rottweiler.

We jump away as the dog shoots through the door and looks at us, whimpering. It feints toward one firefighter and then another and another. He’s hungry and thirsty. I have a bottle of water. I squat down, cup my hand, and pour water into it, but the dog ignores me. A firefighter helps me back up. I wipe my face with my wet hand. I’m forty-eight, a good twenty years older than these firefighters, and about the same age Titler was when I first wrote to him in 1970. I was thirteen and had just finished reading his book, "The Day the Red Baron Died." Before then, I’d thought the Red Baron was nothing more than Snoopy’s imaginary enemy in the "Peanuts" comic strip. I didn’t know he was the most famous World War I German fighter pilot. I didn’t know his death was a mystery.

The book filled me with questions. Encouraged by a determined and curious mother, I wrote to Titler. To my great surprise, Titler answered. I wrote him another letter, and another. His letters prompted more from me, and a correspondence was born that lasted decades.

I was one of hundreds of journalists sent to the Gulf Coast when Hurricane Katrina struck on August 29, 2005. That night, in the living room of my girlfriend’s Overland Park, Kansas, home, I watched television images of submerged houses in New Orleans that recalled scenes of World War I portrayed in Titler’s book. In the first chapter, he described Cappy, a desolate French town near the bank of the Somme River: A wall. It belonged to a house that now spilled on the cobblestone street. Everywhere were ruined and demolished structures, remnants of houses, and jagged tree trunks.

I searched the Internet, found Titler’s phone number and called his house, but the line was dead. I found an online Katrina message board and listed his name, but no one, not the police, firefighters or the Red Cross, responded with any information.

More than two weeks later, a message appeared on the board: “9/14/05. Re: Looking for Dale Titler in Gulfport. Did you get in contact with him? Haven’t seen him in a while. I think he is still with the MS Gaming Commission.”

I called the commission but no one answered. The next day, my editor at the Kansas City Star called me into her office. Pack up for Louisiana, she said. I didn’t tell her I was going to use the opportunity to find Titler.

Howard and his colleagues have found ten bodies since they arrived in New Orleans. The dead were discovered in bedrooms and kitchens. Sometimes they were in attics surrounded by bottles of water, a final refuge before trying to break through the roof. It was hard to tell precisely where they had died because the water may have carried them through the house like flotsam before it receded.

“The dead ones I saw, I couldn’t tell their age except they were adults,” firefighter Eric Ashburn of Chattanooga, Tennessee, tells me. “I imagine they had something, an illness maybe, that prevented them from getting out.”

Glenn Dorner, task force leader for Georgia Search and Rescue, nods in agreement. “When you see an entire world shaken up, your personal security is threatened,” he says. “We’ve been trained on critical stress management, but there’s no coping measures to get through this.”

Among other things, he adds, no one advised him on how to handle distressed pets.

“Be careful of the dog!” Howard shouts.

The dog barks at us, won’t stop moving. It seeks an exit from our loose-knit circle. The firefighters step back and the dog dashes through a gap between two of us. It finally stops on the sidewalk, tongue lolling, watching us.

“The other day one came out like a bullet.”

“This one wasn’t exactly slow.”

“Crackers. All’s I got is crackers.”

I follow two firefighters into the house. The soggy brown carpet sucks at our boots; water bubbles underfoot and absorbs the imprints of our every move. We pass through a pink-wallpapered hall where framed family photos hang aslant over an empty fireplace and enter another room lined with more pictures of smiling men, women, and children. Floodwater has stained their silent faces, paling them to ghosts. No wonder: A dark line on the wall marks the storm’s high-water level just below the ceiling.

Glasses are standing on a bar that is still stocked with booze. I pick up an overturned chair, the one blemish in the otherwise oddly undisturbed room. The scene here is nothing like a house we had entered earlier in the morning that had been turned upside down from flooding. Sofas were piled against back doors, the ceilings dripped mud, and mold covered the walls like thick green fur. One of the firefighters vomited from the rank, throat-closing funk.

We climb stairs into the attic. I brace myself for what we might see. Is there a way to prepare for discovering the dead?

“There’s a closet in the attic. Never saw that before.”

Back out on the street the dog has vanished. Howard spray-paints a zero on the wall next to the broken front door.

“Place across the street had antiques and stuff,” Howard says.

“House over there still had some good paint. Must’ve bought the mold-free kind,” Dorner says.

Inside empty parked cars, rotted bags of spoiled groceries spill onto the seats. There is no sound on the street except for the creak of a rocking chair listing slowly in the wind next to a truck that floodwa­ters deposited on a front porch. Kitchen curtains hang like poor posture from broken rods. A wet wind carries the stillness far beyond us.

Is Titler still alive? Did he make it through the storm? Maybe he’s in one of the hospitals that flooded. Maybe he’s one of the dead patients they found days after the hurricane hit. I’ve got all these questions and I’m stuck in New Orleans because the roads leading to his Mississippi home remain flooded and impassable.

A man in a blue T-shirt and blue jeans looks at us from the porch of the frayed white house next door. A yellow fence wrapped around the front yard shines in the sun. Music from a radio interrupts the silence and carries loudly into the street from an open window. The man raises a hand and we wave back. A suitcase stands beside him. One of the firefighters talks to him for a minute and then walks back to the rest of us gathered around the pickup. He says the man has just returned to his house for the first time since Katrina struck. His neighbors left before he did. He hasn’t seen them. He is still standing in the street as we drive off.

J. Malcolm Garcia is a freelance journalist and the author of "The Khaarijee: A Chronicle of Friendship and War in Kabul" and "What Wars Leave Behind: The Faceless and the Forgotten." He is a recipient of the Studs Terkel Prize for writing about the working classes and the Sigma Delta Chi Award for excellence in journalism. His work has been anthologized in Best American Travel Writing, Best American Essays, and Best American Nonrequired Reading.