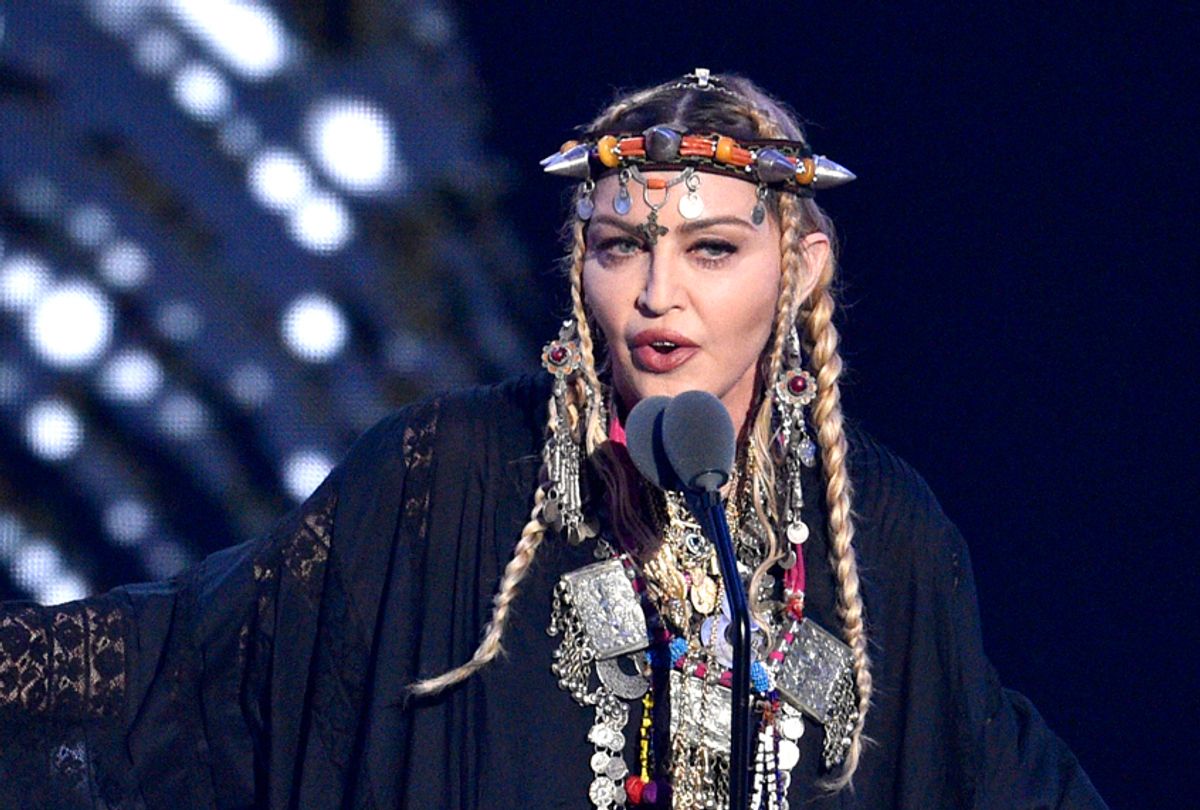 Madonna's attempt to pay R-E-S-P-E-C-T to the late Queen of Soul, Aretha Franklin, during MTV's Video Music Awards has some viewers blasting the singer for d-i-s-r-e-s-p-e-c-t.

Madonna appeared at the VMAs on Monday night — the first major awards show since Franklin's death — to present the award for video of the year and pay homage to Franklin, who died last week after a battle with pancreatic cancer. Her alleged tribute to the Queen of Soul, however, left many viewers feeling (at best) conflicted, with many saying her speech honored Madonna way more than it did Franklin.

Madonna began her bizarre speech by saying Franklin had "changed the course of my life. I left Detroit when I was 18. Thirty-five dollars in my pocket. My dream was to make it as a professional dancer."

The singer then continued to talk about her foray into the music industry.

"After years of struggling and being broke, I decided to go to auditions for musical theater. I heard the pay was better. I had no training or dreams of ever becoming a singer, but I went for it. I got cut and rejected from every audition," Madonna continued. "Then, one day, a French disco sensation was looking for backup singers and dancers for his world tour. I thought, 'Why not?' The worst that can happen is I could go back to getting robbed, held at gunpoint and being mistaken for a prostitute in my third-floor walk-up that was also a crack house."

Madonna then mentioned that she decided to sing "(You Make Me Feel Like) A Natural Woman" at the audition because one of her favorite albums was Franklin's "Lady Soul."

"I could see that they did not take me seriously. And why should they?" Madonna said. "Some skinny-ass white girl is going to come up here and belt out a song by one of the greatest soul singers that ever lived?"

According to Madonna, she impressed the men but was rejected from the audition. The story then veered into an unrelated anecdote about Madonna going to Paris and then coming back to the U.S. to learn to play guitar. Finally, Madonna said, "So, you are probably all wondering why I am telling you this story. There is a connection."

"Because none of this would have happened, could have happened, without our lady of soul. She led me to where I am today," she continued. "And I know she influenced so many people in this house tonight, in this room tonight. And I want to thank you, Aretha, for empowering all of us. R-E-S-P-E-C-T. Long live the queen."

The internet reacted swiftly to Madonna's pre-fame story and her failure to properly honor Franklin.

"So instead of an actual tribute to Aretha you let Madonna talk about herself for 30 minutes?! @MTV our beautiful black queen deserves better," wrote one user.

Other social media users blasted MTV for not finding an artist of color to pay tribute to Franklin.

"#Madonna is demonstrating a dynamic performance of peak white womanhood. This was not an #Aretha tribute but a monologue on how another iconic Black woman is being reduced to how she helped a white woman," one user wrote.

Others called for MTV to issue an apology over Madonna's tribute, suggesting that it had managed to "disrespect" Franklin's legacy.

MTV did not responded to Salon's request for comment.

Franklin, one of the most celebrated singers in American history, was bestowed the Presidential Medal of Freedom by former President George W. Bush. She earned 44 Grammy Award nominations and 18 wins, including the Grammy Lifetime Achievement Award and the National Medal of Arts, and was the first woman inducted into the Rock & Roll Hall of Fame.

She performed for queens, popes and presidents, and once moved President Barack Obama to tears over her show-stopping performance of one of her all-time greatest records, "(You Make me Feel Like) A Natural Woman," at the 2015 Kennedy Center Honors.

Franklin sang at the funerals of Dr. Martin Luther King Jr. and Mahalia Jackson and also at Obama's inauguration in January 2009, an outdoor performance in sub-freezing temperatures. She had more than 20 No. 1 singles spanning four decades and was the youngest artist to receive the prestigious Kennedy Center Honors.

"The breadth of her accomplishments makes it seem inadequate to simply declare her the greatest singer of our time. She is Lady Soul; she is blues personified; she sings the gospel from a place so deep an unbeliever will feel the presence of the divine," wrote music journalist Caryn Rose, who penned a chapter on Franklin for the forthcoming book, "WOMEN WHO ROCK: Bessie to Beyoncé, Girl Groups to Riot Grrrl."