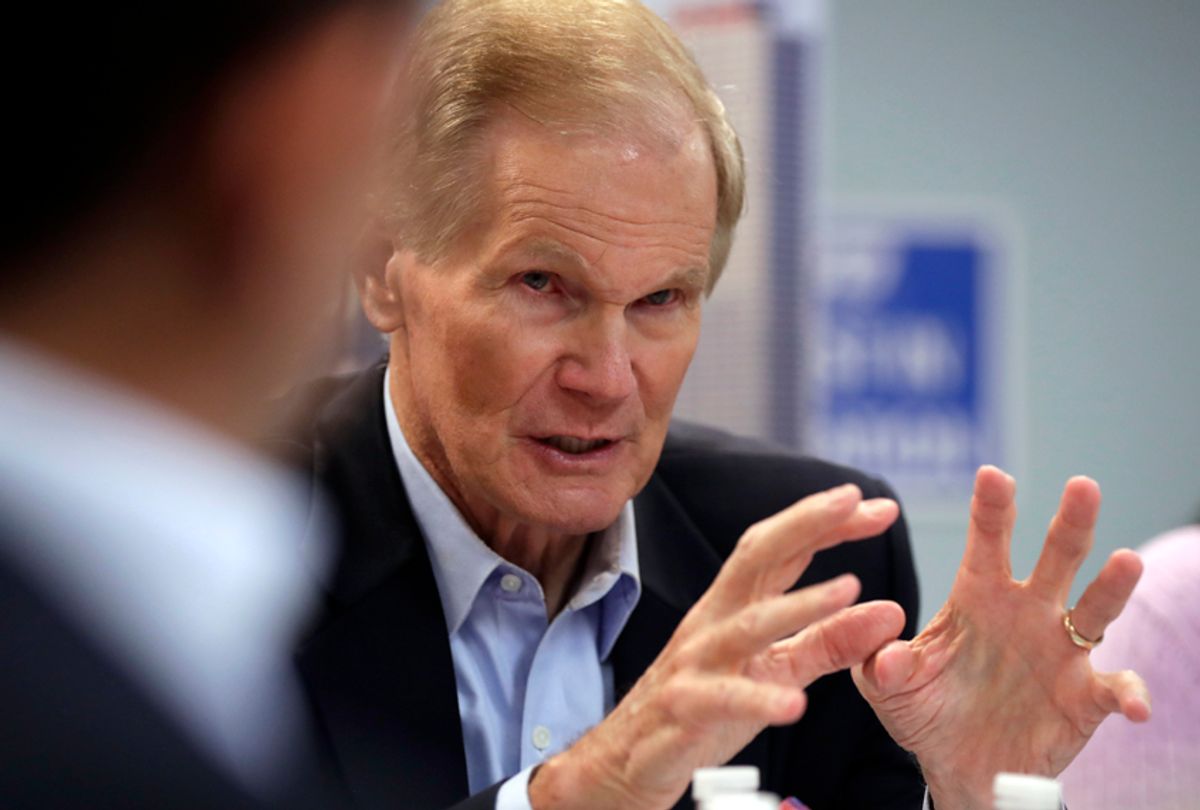 Something is rotten in the state of Florida. Sen. Bill Nelson, a Democrat facing a tough re-election battle against current Republican Gov. Rick Scott, has repeatedly made alarming claims that Florida's electoral security has been breached by Russian hackers. There is no direct evidence to support this claim, however, and a number of Florida Republicans have suggested Nelson is lying.

On several recent occasions, Nelson has said that Russian hackers have not only penetrated Florida's election systems but currently have access to them and could meddle with the state's election results this November, including the crucial Senate race between himself and Scott.

Considering that another Democratic senator up for re-election, Claire McCaskill of Missouri, was recently the apparent target of a hack attack, Nelson's assertion is not implausible at face value. But direct evidence to support his claims is lacking so far, and hacking one candidate's political campaign is quite a different matter from hacking an entire state's electoral system

Here is a report from the Tampa Bay Times earlier this month that conveys the sense of what Nelson has been saying:

"They have already penetrated certain counties in the state and they now have free rein to move about," Nelson told the Tampa Bay Times before a campaign event in Tampa. He said something similar a day earlier in Tallahassee but declined to elaborate.

The article later provided a more elaborate quote in which Nelson fleshed out his assertions:

"This is no fooling time and that's why two senators, bipartisan, reached out to the election apparatus of Florida to let them know the Russians are in your records and all they have to do, if those election records are not protected, is to go in and start eliminating registered voters," Nelson said Wednesday.

"You can imagine the chaos that would occur on Election Day when the voters get to the polls and they say, 'I'm sorry Mr. Smith, I'm sorry Mr. Jones, you're not registered.' That's exactly what the Russians want to do. They want to sow chaos in our democratic institutions."

Nelson's mention of "two senators" presumably refers to the letter that he and Sen. Marco Rubio, a Republican, wrote to 67 county election supervisors in Florida outlining the potential threat posed by Russian hacking. But that letter did not contain the same alarming specifics detailed by Nelson. Some Florida Republicans contend that's because Nelson is not telling the truth.

Revell continued, "If Senator Nelson has specific information about threats to our elections, he should share it with election officials in Florida."

So which is it? Is Nelson exploiting fear about American election security in order to garner political capital? Or are Republicans denying a threat that they know to be true in hopes of winning a vulnerable Senate seat?

Either way, the fact that both parties can't get on the same page regarding the possibility of serious election hacking is a major problem.

"I think the great concern here is that when you have messaging from one party saying something did happen and messaging from another party saying it didn't happen, this undermines the credibility of messaging in general coming about election security," Bret Schafer, social media analyst and communications officer at the Alliance for Securing Democracy, told Salon. This confusion has politicized the entire issue, he added, "in a way that is obviously not helpful."

Schafer added that a "greater concern" may be that "Russia doesn't even need to get in there and do anything to cause real harm. Because if they're able to promote this idea of election systems being vulnerable, if a result comes back in the midterms that maybe is surprising or didn't go the way people expected, it then gives them the ability through their disinformation mechanisms to put the idea out there that votes could be changed. Undermining the general trust and reliability is just as effective as actually getting in there and changing votes."

Schafer's ominous prediction is coming to pass. In a Washington Post analysis on Friday, reporter Salvador Rizzo largely rejected Nelson's claims that the Russians have hacked Florida's election system, saying there was no evidence to back that up.

The Department of Homeland Security, the top election official in Florida, and election officials in several of the most populous counties in the state have said they have no evidence that Russia has access to Florida election systems. Nelson said his information came from Sens. Richard Burr (R-N.C.) and Mark R. Warner (D-Va.), the chairman and vice chairman of the Senate Intelligence Committee. Neither senator has confirmed Nelson’s specific claim that Russia has access to Florida’s election system, though they have echoed his broader warning about the threat Russia poses to this year’s elections.

Nelson also has cited “classified” information. Although it’s possible that this information exists and proves his claim, it’s a tough proposition for The Fact Checker to accept, since the Department of Homeland Security has denied Nelson’s assertions, the FBI said as recently as Aug. 2 that there’s no sign of “efforts to specifically target election infrastructure,” and U.S. officials probably would have shared this classified information in some form with the state of Florida, where election officials have contradicted Nelson’s claims.

The Post stopped short of the claim by Taryn Fenske, Florida communications director for the Republican National Committee, who told the Washington Examiner that Nelson is "either lying or circling back to try to cover up that he leaked classified information."

Contrast this with a report on Friday by NBC News which suggested that Nelson's concerns could be well founded:

However, three people familiar with the intelligence tell NBC News that there is a classified basis for Nelson's assertion, which he made at a public event after being given information from the leaders of the Senate Intelligence Committee. The extent and seriousness of the threat remains unclear, shrouded for reasons of national security.

The episode illustrates the extent to which secrecy, politics and state-federal rivalries can stand in the way of a unified response to the threat from Russian attacks on a diffuse U.S. election system run by state and local officials. Through a spokesman, Nelson declined to comment.

So the political parties can't agree on whether there's a serious threat to election integrity in the Sunshine State and neither can the media. "If you're going to put something out there publicly about . . . an incursion," Schafer said, there should be a unified message so that people have confidence that what they're hearing is true. Otherwise that's a potential propaganda victory for Russia."

Chris Matthews on the similarities between Donald Trump and Richard Nixon.