"I have never had any sexual relationship with Bennett," Argento said in a statement yesterday 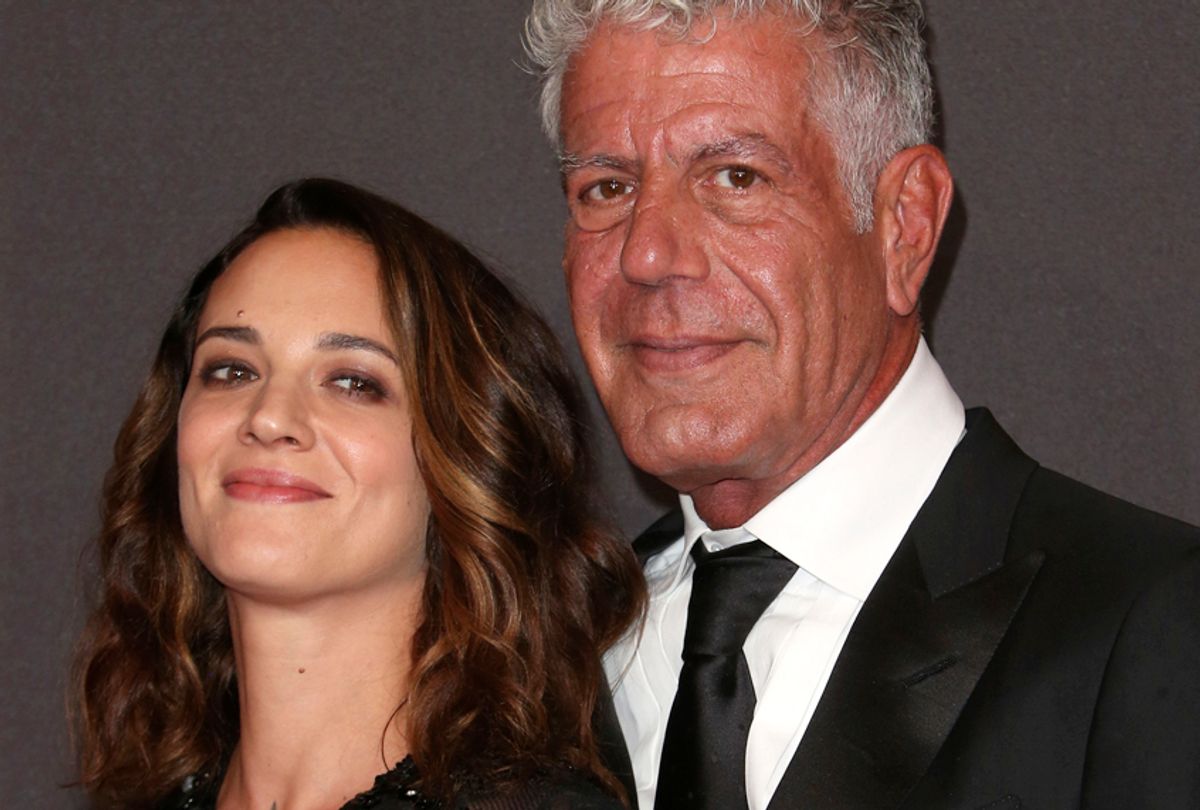 Asia Argento has denied the sexual assault allegations against her in a new statement. The Italian actress-director claims that her accuser, former child actor Jimmy Bennett, was undergoing "severe economic problems" and therefore sought money from Argento and her boyfriend, the late Anthony Bourdain.

On Sunday, The New York Times published an exposé that revealed that Argento, who was among the first wave of women to come forward and publicly accuse Harvey Weinstein of sexual abuse, quietly paid Bennett $380,000 as part of a settlement of an intent to sue after the actor accused her of sexually assaulting him when he was a minor in 2013. An unidentified party sent the Times legal documents exchanged by lawyers for Argento and Bennett detailing the payment arrangements, as well as a selfie from May 9, 2013, which appears to show the two lying in bed topless.

"I am deeply shocked and hurt by having read the news that is absolutely false," Argento said in a statement provided to journalist Yashar Ali Tuesday. "I have never had any sexual relationship with Bennett."

I just received this statement from @AsiaArgento in response to the NYT story published late Sunday evening. pic.twitter.com/jAOo7TAULX

Argento claimed it was Bourdain who "insisted" that the couple compensate Bennett to end his "long-standing persecution" of her and that the actor saw Argento, with her public profile now deeply connected to the #MeToo movement, as well as the wealth and popularity of Bourdain, as a double target for his financial demands.

The Times reported that Bourdain did help Argento "navigate the matter."

"I was linked to him during several years by friendship only," Argento said of Bennett, "which ended when, subsequent to my exposure in the Weinstein case, Bennett — who was then undergoing severe economic problems and who had previously undertaken legal actions against his own family requesting millions in damages — unexpectedly made an exorbitant request of money from me. Bennett knew my boyfriend, Anthony Bourdain, was a man of great perceived wealth and had his own reputation as a beloved public figure to protect."

Bennett began his demand for money from Argento in Nov. 2017, following the publication of Ronan Farrow's New Yorker article a month before, which included Argento's accusation of rape against Weinstein. Since then, Argento has emerged as a central figure in the #MeToo movement, demanding accountability from him, Hollywood and the wider culture.

But according to Bennett's notice of intent to sue, his lawyer wrote, "His feelings about that day were brought to the forefront recently when Ms. Argento took the spotlight as one of the many victims of Harvey Weinstein," the Times reported. Bennett's lawyer claimed that for the child actor to see Argento cast as a victim of sexual assault, it recalled the trauma of his own alleged experience of sexual assault by Argento.

"Anthony insisted the matter be handled privately and this was also what Bennett wanted," Argento's statement continued. "Anthony was afraid of the possible negative publicity that such a person, whom he considered dangerous, could have brought upon us. We decided to deal compassionately with Bennett's demand for help and give it to him. Anthony personally undertook to help Bennett economically, upon the condition that we would no longer suffer any further intrusions in our life."

Bennett initially requested $3.5 million in damages from Argento for emotional distress, lost wages, and assault and battery, according to the Times. In the notice of intent, Bennett's lawyer said that since their 2013 hotel reunion, his wages have dropped substantially because of the trauma from the alleged sexual assault.

When Bennett was seven, he was cast in a 2004 film, which Argento wrote, directed and starred in, "The Heart Is Deceitful Above All Things," and played Argento's son. Since then, the actors have often referred to each other on social media as mother and son.

The news of the accusation against Argento and the subsequent settlement has offered ammunition for renewed criticism of the #MeToo movement's validity now that one of its high profile advocates is implicated. This focus on Argento as an individual bolsters the myth that the #MeToo movement is new and began last year in Hollywood by mostly white women, which ignores more than a decade of work by the actual #MeToo founder Tarana Burke prior to the investigations published by The New Yorker and The New York Times last fall.

Burke has publicly called for a space where men and women survivors can come forward to connect to each other and to share their stories. The longtime activist has steadily advocated for a shift in the culture to reduce the pervasiveness of sexual harassment and assault, of which both men and women are victims, moving away from focusing individual acts of sexual violence and devoting more resources to the interrogation of power and privilege, which allows systematic sexual abuse to go unchecked.

"My hope is that as more folks come forward, particularly men, that we prepare ourselves for some hard conversations about power and humanity and privilege and harm. This issue is less about crime & punishment and more about harm and harm reduction," Burke tweeted Monday after the Argento accusation was published.

"A shift can happen," Burke continued. "This movement is making space for possibility. But, it can only happen after we crack open the whole can of worms and get really comfortable with the uncomfortable reality that there is no one way to be a perpetrator."

"And there is no model survivor," she added. "People will use these recent news stories to try and discredit this movement - don’t let that happen. This is what Movement is about. It’s not a spectator sport. It is people generated. We get to say 'this is/isn’t what this movement is about!'"