The new rom com fantasy: A happily-ever-after based on equality and humanity

In "To All the Boys I've Loved Before" and "Crazy Rich Asians," we see a rom com revival shattering old stigmas 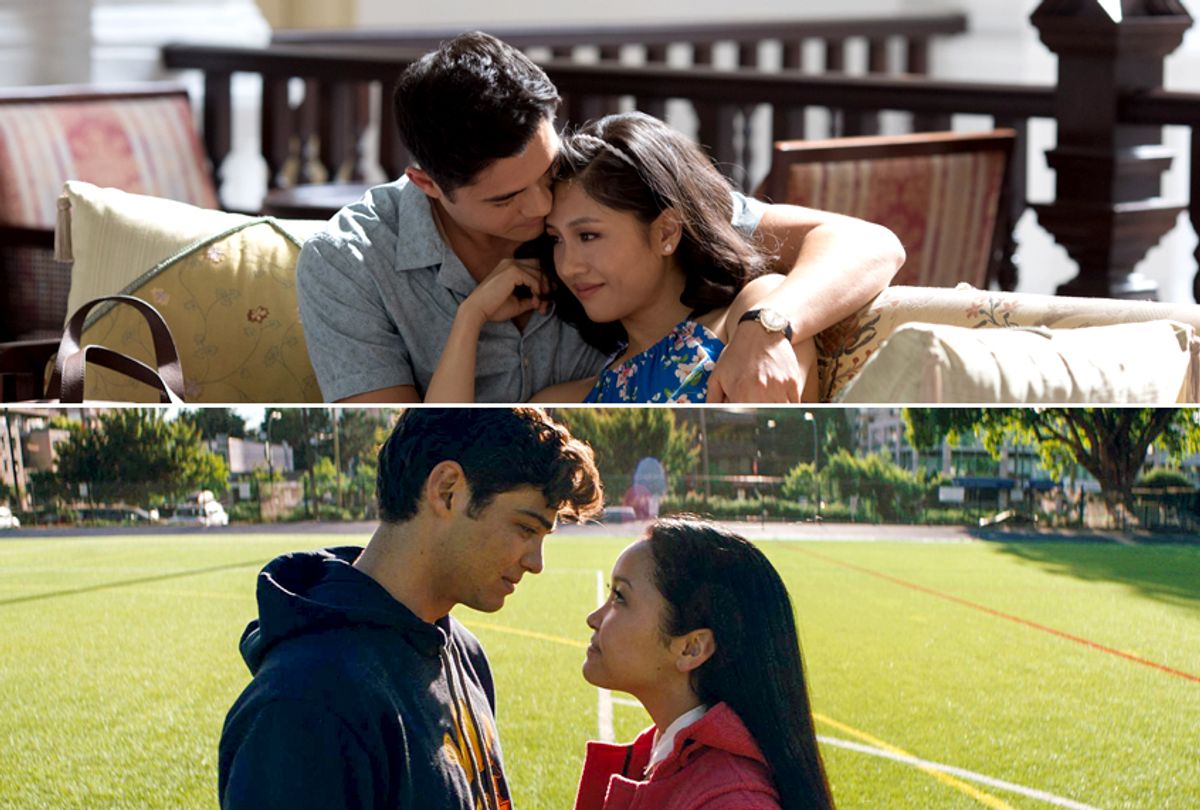 "Crazy Rich Asians;" "To All the Boys I've Loved Before" (Warner Bros./Netflix)
--

Note: This article contains spoilers for "To All the Boys I've Loved Before" and "Crazy Rich Asians."

The building romance between high schoolers Lara Jean Covey (Lana Condor) and Peter Kavinsky (Noah Centineo) in Netflix's buzzy new film, "To All the Boys I've Loved Before," finds its climax when Lara Jean is finally able to shed her protective layer and let love into her life in a real way.

But before entering into an initially fake relationship with Peter — which turned into something more for both of them, of course — Lara Jean preferred the love language of romance novels and fantasies. That didn't mean she didn't feel deeply towards boys in her life; in fact, she had five monster crushes over the years, which she detailed in secret love letters to each of them, including one to Peter dating back to seventh grade and to the most forbidden, her older sister's boyfriend Josh, who was once her best friend.

"I write a letter when I have a crush so intense I don't know what to do," Lara Jean says about her infatuations.

In true romantic comedy fashion, those letters get out and wreak havoc on her personal life, and Lara Jean ends up entangled in a pact with Peter in which they pretend to date each other in order to make Josh and Peter's ex-girlfriend jealous. They even hammer the details of their agreement out in a contract. Viewers then see the charade dissipate as Peter and Lara Jean discover they have real feelings for each other, even as a series of mishaps and miscommunication — not to mention Lara Jean's own defenses — keep their relationship status in limbo.

"I need you to know that I like you, Peter Kavinsky. And not in a fake way," Lara Jean finally admits at the end of the film, an adoration which Peter wholeheartedly returns. However, Lara Jean is still unclear what a relationship means and looks like. Is there a contract for a real relationship, she wonders? Peter lovingly responds: "You gotta trust."

"To All the Boys I've Loved Before," an adaptation of Jenny Han's young adult novel, may be about young people finding and navigating love, but its central theme — that being in love requires vulnerability and trust — is relevant far beyond the teenage years.

Just five years ago, the Hollywood Reporter declared the rom com dead, but the heartwarming romance between Lara Jean and Peter is the latest example of the genre's revival. From the glory of the box office hit "Crazy Rich Asians" to the inventive Netflix film "Set It Up," Hollywood is breathing new life into the conventions of the romantic comedy, finding fresh ways to make the classic boy-meets-girl formula — or boy-meets-boy, as in the case of last year's crowd pleaser "Love, Simon" — work for today's audiences.

"Crazy Rich Asians," the number one movie in the U.S. and Canada when it opened last weekend, follows Rachel Chu (Constance Wu), a Chinese-American economics professor at New York University who accompanies her boyfriend Nick Young (Henry Golding) as he travels home to Singapore to be the best man in his friend's wedding.

What Rachel quickly discovers is how insanely wealthy Nick's family is, a far cry from her own upbringing by a single mother who migrated from China to New York City. "Crazy Rich Asians," based on Kevin Kwan's novel of the same name, explores the tensions between family expectations, power, class and love. On the surface that might not sound revolutionary, but Rachel is also a complex heroine — smart, assured, loving, and she already has her personal and professional life together. She's not been waiting for marriage to complete her.

Channeling a bit of Jane Austen meets Cinderella, Rachel and Nick's happily ever after ends in a sincere yet simple proposal, free of the glitz and affluence that underscores much of their time in Singapore. It ends in the couple choosing love, and a commitment to each other, despite deep-seated familial obstacles — and only after Rachel and Nick are clear that their marriage won't mean alienating either family in the process.

As film genres go, the rom com was overdue for an upgrade. As we think more critically about the roles consent and equality play in relationships, the old ways of depicting the road to "happily ever after" felt incomplete. The new guard is aiming higher, reimagining romantic fantasies free from patriarchal norms and misogyny. As my colleague Mary Elizabeth Williams wrote, "It's hard to imagine living in the #MeToo era and wanting to pay money to see movies in which being a f__kboi is going to be rewarded with the love of a good woman. . . And that doesn't mean romance is dead. Just the opposite. It means, huzzah, there is a huge audience for romances about people who aren't white, who aren't straight and who aren't total selfish brats."

Unlike previous iterations of the genre, which often focused on single, white women to the exclusion of other heroines and also depicted them as incomplete or even dysfunctional until a stable and powerful white man desired them (we've seen this trope as recently as 2015 in Amy Schumer's "Trainwreck"), the rom com's progressive reboot features empowered protagonists earning their happy endings in the form of partnerships that place equal weight on love and humanity.

And so while transformation through romance continues to be a staple of this genre's storytelling, it's no longer the one-dimensional version where a woman is transformed into something to be desired by a man. Now, the transformation is tailored to the story, specific to the protagonist and her needs.

In "Set It Up," Kirsten (Lucy Liu), is a workaholic sports editor who finds love with Rick (Taye Diggs) but then rejects it once she learns he has been dishonest, because she knows she deserves better. In "Book Club," four older women and lifelong friends find their love lives altered substantially after reading the scandalous novel "Fifty Shades of Grey." Last year's Oscar-nominated "The Big Sick" navigated screenwriters (and real-life spouses) Kumail Nanjiani's and Emily V. Gordon's true story of seemingly conflicting cultures and a life-threatening illness that shattered what had felt like uncompromising obligations and differences.

Indeed, today's rom coms — including "Crazy Rich Asians," which has an all-Asian cast, making it the first Hollywood studio film in 25 years to do so, and "To All the Boys I've Loved Before," with its Korean American heroine — have moved away from primarily centering young white heterosexual couples as the default.

These new romances are upending the expectation that films about young white people appeal to everyone and belong in the mainstream while exposing the myth that films with diverse casts would not have the same reach. This has never been true, but it has certainly been demolished by box office hits of the last few years like "Black Panther," "Girls Trip" and again, "Crazy Rich Asians."

There's something particularly powerful about the number of quality and diverse romance films being made in the last few years. It's possible that embracing wider casting and storytelling possibilities is also helping the genre finally shed the stigma — for both fans and stars alike — that romantic comedies are inconsequential and unworthy of serious attention. In truth, that scorn always revealed more about how Hollywood and the culture at large feel about women and girls, as they have traditionally been the primary audience for and subject of the genre. (I hate the term "chick flicks.")

Yet all over social media over the last week, men and women alike have gushed over "Crazy Rich Asians" and "To All the Boys I've Loved Before," unabashed in their enthusiasm. The success of these films could pave the way for more thoughtful romantic comedies depicting empowered and diverse partners and partnerships.

"I think when the rom-com went away, [we became more cynical about] love—maybe true love doesn't really exist," "Crazy Rich Asians" director Jon M. Chu told Esquire. "And I think that's not who humans are. We want to believe in the ultimate love and finding it in the craziest ways. I think it's only natural in the world in which we live that love is the one thing that connects us. And I think people want that dream again."

With the current state of the world, it's also possible that the genre is experiencing renewed popularity right now because audiences are hungry for happy endings and want to absorb as much love as they can, even if it's from (adorable) fictional teenagers. It's hard to know yet if the rom com revival will endure, but in the prophetic words of the heartthrob Peter Kavinsky: "You gotta trust."