Alexandria Ocasio-Cortez, the next Barack Obama?

Just like Barack Obama before her, upstart hotshot Alexandria Ocasio-Cortez 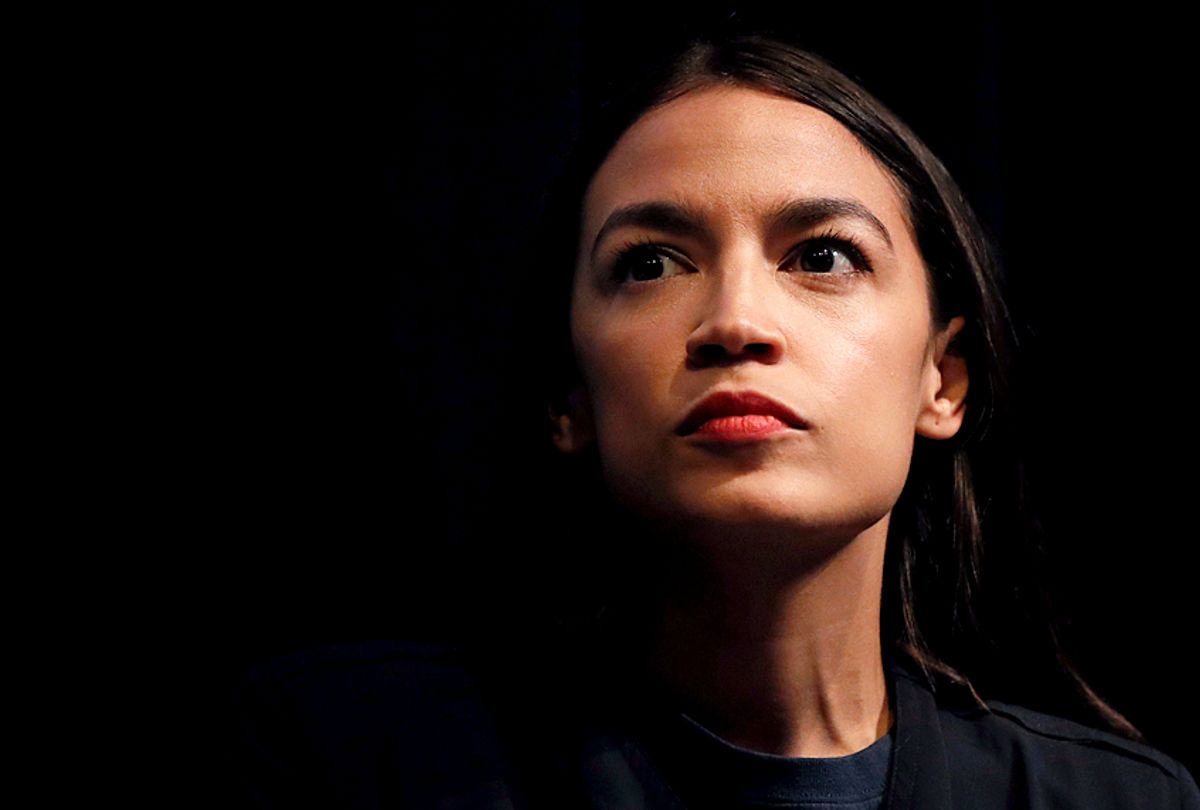 While Alexandria Ocasio-Cortez — the New York congressional candidate who upset Rep. Joseph Crowley in the Democratic primary for the 14th district — is much farther to the left than President Barack Obama on a number of policy issues, she shares one crucial thing in common with the former commander-in-chief: Both of them serve as political Rorschach tests, individuals on whom people from across the ideological spectrum project their own deepest hopes and worst fears.

"I think the Democrats are radicals," former Donald Trump campaign adviser Sam Nunberg told Salon. "They are going so far to the left. Now the media doesn't understand that, or they don't accept it, or they actually are supportive it. Regular Americans, actual rank-and-file Americans, are not. Alexandria Ocasio-Cortez, by all means, please stay out there. Please campaign hard. Elizabeth Warren. Please. Please. Go everywhere you can. Do us a favor. At least [House Minority Leader Nancy] Pelosi is smart enough that all she does is hide and raise boatloads of money."

The antipathy toward Ocasio-Cortez from the right is so strong that it's almost an exact mirror image of the adoring sentiment toward her from the left. Despite being a first-time congressional candidate who hasn't even been elected yet, she has inspired hero worship from self-described democratic socialists who view her as the second coming of Bernie Sanders (with whom she is a close political ally) and seething hatred from conservatives who are so convinced that others will share in their hostility that they're attempting to make her the new face of the Democratic Party.

Why does she provoke such wildly divergent reactions?

"She challenges a lot of policy assumptions that are held dear on the right in American politics, including the market economy, the limits on government spending, involvement in internationalist foreign policy including support for Israel," Joseph Lieberman, a former Democratic vice presidential candidate and Connecticut senator (first Democratic, then independent) who wrote a Wall Street Journal editorial criticizing Ocasio-Cortez last month, told Salon. He added that "the other thing going on" is how Republicans seem to believe that "the publicity she's getting is ultimately a vulnerability for the Democratic Party in the midterm elections... if she can be made the face of the Democratic Party."

Will Marshall, the president and founder of the center-left think tank the Progressive Policy Institute, observed that opposition to Ocasio-Cortez also has implications for the future of the Democratic Party, one that many of the more moderate politicians in that organization find troubling.

"She ran a great race and scored an upset. She should be applauded for that. It shows you the possibilities of Democratic politics. It's sort of a classic American story," Marshall told Salon, before expressing concern that she had an "overly ambitious" desire to use her single primary race in a solidly Democratic, highly liberal district as a template for reshaping the whole party. "Where I would draw the line and object is to try to force everyone in the Democratic Party, to tow this new party this new Socialist Party line. Even if I agreed with these ideas, which I don't, movement politics is not the same as party politics."

As for her wide support among the left?

"If we’re smart, established leaders and fresh faces in the Democratic Party will see AOC’s surprise win as a harbinger of November success," Christy Setzer, president of the Washington public relations firm New Heights Communications in Washington, told Salon by email. "The candidates who've been successful this cycle are positive, have concrete ideas for our future, care about the country’s general welfare and feel like a stark contrast to the current White House horror show. By that measure, AOC is a great example of the change we want to see across the board."

Setzer's views were echoed by Colorado Gov. John Hickenlooper, a moderate Democrat who is widely considered to be a potential 2020 presidential candidate.

"It's great to have such enthusiasm within the Democratic Party," Hickenlooper told Salon by email. "We need to welcome her ideas and diverse approach to addressing some of our countries biggest challenges. The Democratic Party is a big tent where those who want to dedicate themselves to improving how we govern have a real shot at making a difference."

Ocasio-Cortez's popularity can be explained by her outspoken support of policy positions that are beloved by leftists — issues like raising the minimum wage to $15 an hour, providing free college tuition, guaranteeing Medicare for anyone who wants it and abolishing ICE. In this way, Ocasio-Cortez truly is the spiritual heir to Bernie Sanders' 2016 presidential campaign. She captures hearts by offering a more humane and compassionate future, one that she believes can only be achieved through the policy prescriptions she advocates.

"What's required is somebody who's more likely not to be on the extremes, could be a liberal or conservative, but understands that the way you get something done in Washington, in Congress is to negotiate and compromise, hopefully not on principle, but compromise on how much you can achieve in any that you desire, in any one piece of legislation," Lieberman explained. He then described how he and other legislators who wound up being productive would make a point of seeking common ground, a practice that involved seeing what they knew for sure they could agree on and working toward that while leaving battles over important points of disagreement for another day.

"Ted Kennedy [former Senator from Massachusetts] was a very liberal Democrat. I wouldn't call him an extremist, but he was a liberal Democrat for sure. Not a center-left, but left Democrat," Lieberman recalled. "Orrin Hatch [Senator from Utah] is a quite conservative Republican, not a centrist Republican or moderate Republican. But for a period of years, the two of them were chairman or ranking member, depending on which party was in control, had the majority of the so-called HELP committee — the health, education, labour, pensions committee — and worked together on some major legislation." He cited CHIP (the Children's Health Insurance Program) as an example of a landmark bill that improved people's lives because it was crafted in a bipartisan way.

Marshall made a similar point, arguing that it is important for left-wing Democrats to recognize that while everyone in their party seeks the same ends, they may not agree as to the means.

"Everybody I think in the Democratic Party is in favor and has been working for universal healthcare. That’s the issue that unites all progress, all Democrats but the question is how to get there?" Marshall explained. "In a way, that's politically sustainable, in a way that you can build a majority support for. Obviously, there are very different arguments there."

From the Republican perspective, the criticisms of Ocasio-Cortez seem to be motivated by a desire to make her into an all-purpose boogeyman, someone who they believe (or at least hope) will scare swing voters away from the Democratic Party brand. While her gender and Latina background almost certainly play a regrettable role in this scaremongering, it is likely that Republicans would employ a similar strategy against Sanders or other Sanders-esque candidates if one of them became the Democratic presidential nominee in 2020. Only time will tell if this strategy would prove effective, but it needs to be recognized here and now that the GOP obsession toward Ocasio-Cortez is very much motivated by this type of strategic thinking.

Democrats should not make the same cardinal moral mistake as the Republicans.

As Lieberman noted during our conversation, Republican "problem solvers" like former House Speaker John Boehner and current House Speaker Paul Ryan have found it increasingly difficult to govern because of the growing influence of the uncompromising idealists from the right. It is well and good for Democrats to denounce those far right-wingers as unrealistic obstructionists, for this is indeed the case. Even though Obama pursued an ideological agenda that was only center-left, the far right elements of Congress regularly stymied him because they could not countenance any policies that did not align exactly with their own extreme vision for America. As a result, the man who led America out of the Great Recession, passed a landmark health care law that saved countless lives, became the first president to champion gay rights and presided over the justified assassination of Osama bin Laden wasn't able to achieve more... and the blame for that rests primarily with congressional Republicans.

These are all important points that Democrats must not forget when they call out obstructionist Republicans in the future. That said, will the Democrats look any better if they develop their own homegrown wing of unrealistic obstructionists, who likewise torpedo legislation that would help people in the name of philosophical purity?

Lieberman on centrism in modern politics