Felix Trattoria's Sfincione (or, focaccia by any other name)

An otherworldly, honeyed confection from restaurant Felix that reveres its Sicilian roots and inspires replication 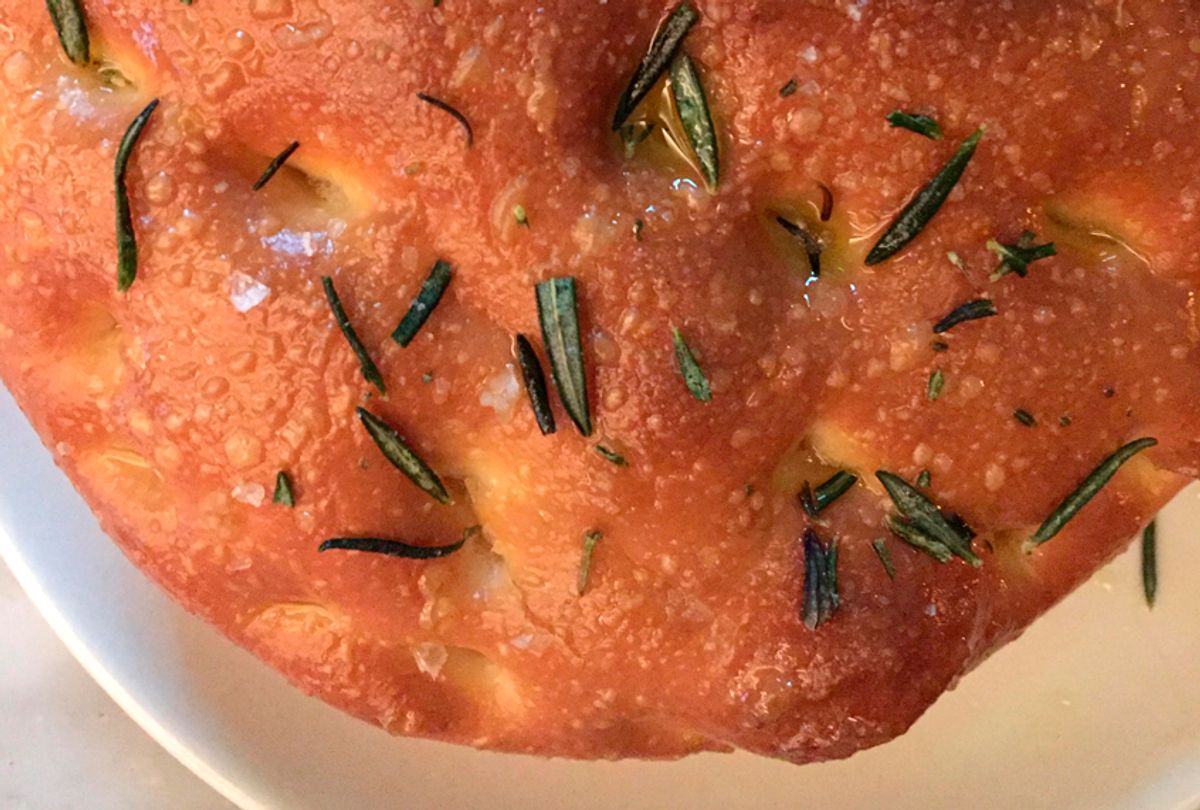 The Sfincione at Felix Trattoria
--

Everyone has flipped for the focaccia at Felix, even though the menu and waitstaff offer a corrective: it's the sfincione you adore, the sfincione you want, the sfincione that puffs and poufs like dear Honey in "Who's Afraid of Virginia Woolf," and honey, true, is one of the few substantives bits of information circulating about the composition of this wonder loaf. An incomplete dossier: in the dough, honey; drenching, dousing, yet not overburdening it is olive oil. Garnish: rosemary, sea salt. The rest, eater, is a mystery, and a mystery is where we begin.

It was early Sunday night, the sun still red-hot enough to make anyone a little sweaty. This wasn't my idea of hungry weather (more, in the Albee-an sense, thirsty), but, as my husband and I drove through Venice, I couldn't help feeling apart of the many-ringed circus of eating: crowds stood in the backdraft of waffle cones at Salt & Straw while a busker strummed "Eight Days a Week;" young girls stabbed straws through juice at Kreation; date nights spilled out of Wabi, where one knows the floor's glittering neon with roe. We, too, found a line, a shorter one that wound out the door of Felix Trattoria, the year-old restaurant run by Evan Funke.

Felix, nominated for a 2018 James Beard (Best New Restaurant), holds the corner parcel on the ocean-est edge of Abbot Kinney: it's spot with Sophia Loren muralized on the bricks. When she said, “Everything you see, I owe to spaghetti,” Loren was referring to her figure, but the same could slogan for Felix. Except it's not just the spaghetti that's life-altering at Felix. When it opened in 2017, Funke told Food & Wine: “I want to create the most comprehensive pasta program in the United States." Perhaps he has, though "comprehensive" is the sort of euphemism one might bandy about in place of "exhaustive" at a recipe like the Cheesecake Factory, a short leap from tired — and Funke's food is the opposite of all that. It is food of pleasure, a very particular pleasure: the pleasure of craft. (Another Loren-ism comes to mind: "There's no pleasure in working if you don't do the things you want to do.") The pleasure in working, exactingly, especially when the work you're doing is right work: this imparts something approaching sublimity, euphoria (there it is, in the morning bun in at Tartine) and it's part of the reason I can't stop eating at Felix. I've been half a dozen times in the last year and the pleasure-craft quotient — you practically see it in veining the turquoise-and-pink wallpaper — is what Jeff Gordiner must've been referring to in Esquire last year, when he called Felix the best new restaurant in America: "Simultaneously comforting and thrilling, traditional and innovative," Gordiner wrote, "Felix is . . . the kind of operation that makes you feel, when you’re lucky enough to be in the middle of it, that it’s the incarnation of everything life ought to be."

What life ought to be, Felix proposes, is a celebration of precision and process and practice; recently Funke shared on Instagram this quote from Tony Robbins: "Repetition is the mother of all skill." The words caption four parchment-lined trays of hand-rolled pasta, wreaths and twists and shells. Like most of Funke's posts, the image is hashtagged #fuckyourpastamachine.

Yet thug kitchen Felix is not and neither is Funke an enfant terrible. He grew up in Pacific Palisades. Before Felix, he ran Bucato in Culver City; before that, Rustic Canyon. He studied in Italy and hunched, I imagine, in alleys with Italian women, forming fusilli and listening to pop songs. He worked at Spago.

It wasn't long before I was inside Felix, waiting on a table. I'd attempted to plant myself at the bar, only to find it well-occupied, ablush with ginny, pink Negroni Biancos, and loud.

But here's a tip to anyone daunted by the calendar of unavailable tables you'll find if you try to make a reservation: walking-in is possible; bar-noshing is, too, though one must be aggressive and better than me at tuning out prattle:

(i.e., "I'm telling you, this is the best pasta in America," a dude behind me said to his buddy. "It's pretty good," his friend said.

His friend had just spent a week in Italy.

"Yeah, but in America," the dude insisted.)

A name is a name until the name becomes a direction. I hadn't been concerned about the distinction between sfincione and focaccia when I'd eaten it before. It was just wonderful: dimpled with pinky-prints, scattered with rhombi of flake salt and apostrophes of rosemary, and the bread's interior: marshmallowy, pillowy, cotton-candied, a tufted thing under an oleaginous crust. It is a bread of excuses, a bread of sighs, a bread of lusciousness baked through and through in the form of faint stains of olive oil that have sunk and settled in the dough. You could tear apart the round (six inches?), but the tiny bubbles still setting around the dimples let you know it's hot. A knife does the job better, and as soon as you bring the blade to the crust you realize you're in for a popover-esque affair, minus the egginess. The sfincione gives up a puff of steam. And when you take a bite, the crust is the best fried bread you've ever had and inside is soft to the point of dissolving. It's a savory fritter of bread, the transcontinental love child of youtiao, brioche, and the Krispy Kreme cruller.

It could've been called anything, except — except! I wanted to recreate it at home.

"Sfincione" roughly translates to "thick sponge." It merges pizza and focaccia doughs. At Felix, Funke makes his with flour imported from Italy, my server tells me, and the secret is a long, temp-sensitive proof.

An interesting phenomenon occurs with food that is familiar, perfectly executed, and delicious: I forget. I forget the skill. I forget the chef. All I know about the reviews or the pedigree or the caliber of ingredients is decrumbed from my table. Only the food remains, tasting like an inevitability, like it must be growing this perfect in the wild, like a cardinal-red strawberry from a stand on a dirt road in the Gill, Massachusetts.

For a diner, the demurred technique is a gift. All of us in line at Felix may know about the pasta humidor, but as we're slurping cacio e pepe — forget it. Perhaps this is dangerous. While I like food that announces itself, its virtuosity, I've never left Alinea thinking I can approximate Grant Achatz's legerdemain, I did leave Felix cautiously optimistic about this bread.

I could, I decided, merge what I knew about focaccia and what I knew about sfincione and produce, with ingredients procured ON THE WAY HOME, a comparable loaf. Hadn't I spent weeks in a fiendish Google? Weren't my cookbook inquiries? I mean, where to begin with the world of Sicilian focaccias? It's vast and leavened territory, pocked and char-pecked, rolled, stuffed, floured and flowered.

Forget that I hadn't torn open a packet of yeast since moving to Los Angeles. This wasn't just an internet wormhole. Back when I really used to find perfect strawberries on the side of a New England road, I had made focaccia — many focaccias, a couple recipes . . . weekly! Melissa Clark's two-floured dough begged to be decorated with ramps; Wolfgang Puck's, burlier, used honey and thyme; Claudia Fleming's was creamy from milk, and worth every minute it took to deseed a carton of Concord grapes.

There wasn't a bad one in the bunch, but none produced a bread with the same ethereality as Funke's. The crust was close in Clark's recipe, where the bread bakes in a wading pool of olive oil, but while it could easily be sliced horizontally — in other words, it had some height — it was too short to ride.

Maybe this is why Felix's bread is Sfincione first, focaccia second. What matter that if, in "Best of Sicily," Francesca Lombardo writes, "Unlike its circular cousin (pizza) sfincione is baked in a square tray and cut into square or rectangular pieces." If food encyclopedias concur that what Palermo locals might call spinciuni is "a Sicilian pizza with a thick soft base topped with tomato, cheese, anchovies, and olives." I'd made that, too! I remembered smeary tomatoes and the perfect salinity of fish playing in that sweet acidity, the humble decadence of bread(crumbs) on bread.

Purportedly invented by the nuns of San Vito in the 16th or 17th century, sfincione is street food and holiday fare, but never, it seems bare. I found no mention of anything close to the one served at Felix, not even the fetching sfincione bagherese, a white sfinch erupting with anchovies and onions that uses mineral water and dry beer (or, as an alternative, yeast) in the dough.

After much deliberation, I decided to make Sfincione Siciliano, minus the condimento. Like Funke's, the dough called for sweetness, but it did not require a day's rising. It didn't even ask for overnight.

Was the flour the key? The honey? Clearly I was looking for a shortcut. I could splurge on an Italian import. On my way back from Venice, I stopped by Erewhon, mecca of raw/vegan mignardises and desert of wheat flour. A clerk pointed me to a miniature bag of King Arthur. When I asked if he was fond of any of the honeys (the selection was excellent), he told me he was "doing the whole Keto thing" and "couldn't honestly say."

There was 00 organic flour at Whole Foods, though, and armed with these ingredients I set up about my night-baking. Everything cooperated: the yeast foamed, gobbling up the Topanga honey; the flour and water came together into a sticky, soft dough. I covered it with a damp towel and went to bed.

And there it was in the morning, risen, smelling only faintly overproofed. I sloshed olive oil around an eight-inch round and let the dough rise while the oven heated to 400F. Under another towel, it swelled. When I gathered my oven was warm enough (it's a 3/4-size, manual affair), I dimpled and massaged, plying the dough with olive oil. Right before I put it in the oven, I sprinkled it with flake salt. I'd had every intention of using rosemary, but the plant in my apartment's courtyard was, mysteriously, gone.

When my timer beeped, the sfincione did look right, albeit pale. The olive oil had saturated the crust. I flipped the bread out of the pan and it didn't collapse.

I waited ten minutes (fine, five) before slicing my sfincione. It didn't puff steam so much as wheeze. While the crust was good, I knew that salt could disguise a multitude of sins. The interior was dense, dull-tasting, and, if I'm being honest, the wrong side of underdone.

"You did it!" my husband said, when he saw the dough later.

It could become toasted and fried, a fine panzanella. But focaccia or sfincione? Fortunately, we had leftovers from Felix.