In a promotional video for its 2019 programming, HBO teases new seasons of "Thrones," "Big Little Lies" and "Veep" 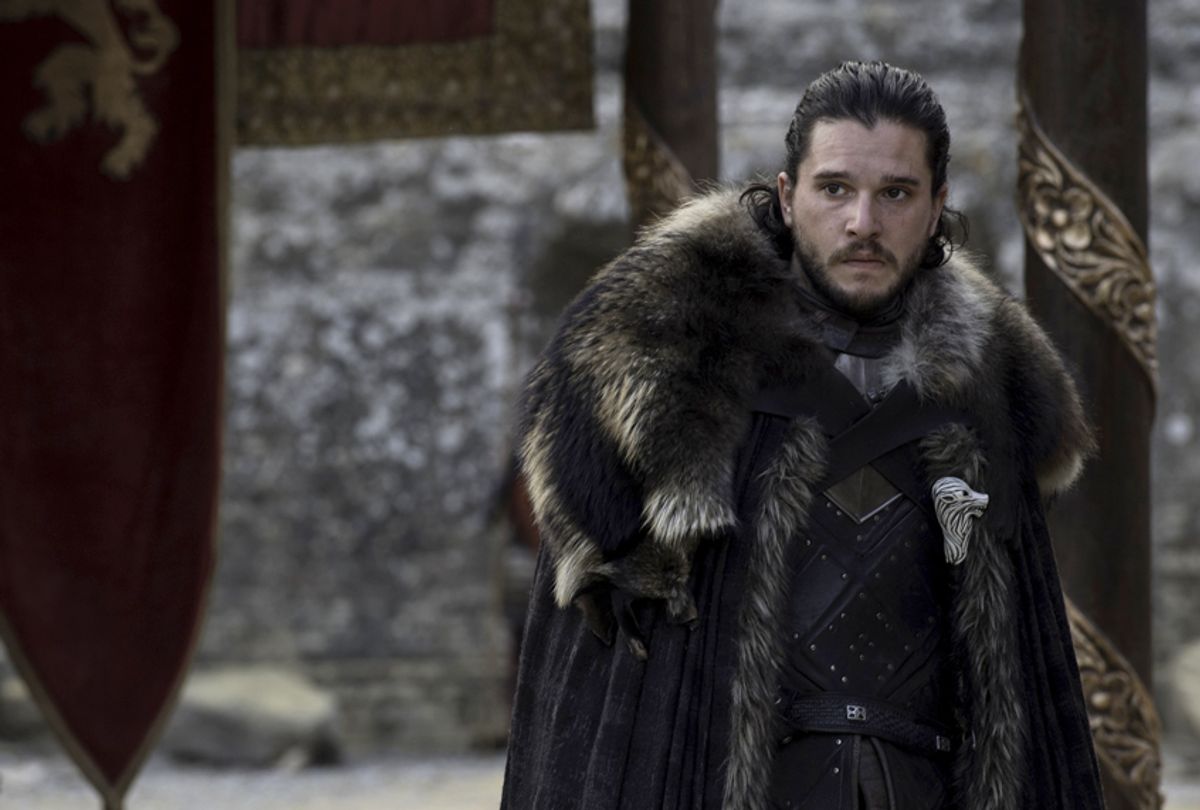 Kit Harington as Jon Snow in "Game of Thrones" (Macall B. Polay/HBO)
--

HBO has delivered the first footage from "Game of Thrones'" eighth and final season as part of its "first look" reel for its 2019 programming.

The scenes from the upcoming GoT's season are short — the whole reel is just 100 seconds in total — yet significant. The cable network first premiered the video Sunday night during the season finale of "Sharp Objects."

The footage recalls several moments from season 7, and remember, it left off with Jon Snow (Kit Harington) and Daenerys Targaryen (Emilia Clarke) knee-deep in their romance. Meanwhile, Bran Stark and Samwell Tarley have discovered that Jon Snow is actually a Targaryen. Most importantly, the Night King and his gigantic zombie army, including one of Daenerys' dragons, broke down the wall, setting up the eighth season for the winter war that the entire show has been approaching.

In HBO's new first look, when we see Jon Snow and his sister Sansa Stark (Sophie Turner) embracing each other at Winterfell, it raises questions about where in the season this falls and what else is happening around them. Most curiously, Sansa is peering over Jon Snow's shoulder, seeing something, but her expression makes it unclear whether it is potentially life-threatening or not, such as the White Walkers approaching versus say, seeing Daenerys for the first time.

According to the Hollywood Reporter, their location is even more pressing:

But it seems like a bigger deal that Jon Snow and Sansa are reuniting in Winterfell at all, considering the fact that the White Walkers are officially in Westeros at this moment in the story. Given their place on the map at the moment, with a dragon in tow, one expects the Night King's army will be upon House Stark's ancestral home at any moment. Indeed, it's easy to imagine the scenario where they land upon Winterfell before Jon and his allies are able to make it home in time for the battle. Considering that unpleasant scenario, the news could be very grim for the likes of Sansa, Bran, Samwell, Gilly (Hannah Murray) and even Arya Stark (Maisie Williams), all last seen in Winterfell.

Winter may be coming, but HBO is working hard to not let any spoilers leak until the show returns sometime in the first half of 2019.

"Although Season 7 was plagued by leaks ― including entire episodes ― producers have taken steps to ensure that Season 8 is kept under wraps," HuffPost reported. "The cast and crew reportedly filmed multiple endings in order to foil leakers so that no one can be quite sure what’s real and what isn’t."

The final season will be six, likely extended episodes, and a "Thrones" prequel spinoff is expected to begin taping in early 2019, HBO revealed at the Television Critics Association.

The promomotional video also shared footage from the new season of "Big Little Lies" featuring Meryl Streep, a long-awaited season 3 of "True Detective" featuring Mahershala Ali, and Julia Louis-Dreyfus in "Veep," among others.

How Michael K. Williams of "The Wire" Masters Acting

While reflecting on his acting process, Emmy-nominated actor Michael K. Williams shared with SalonTV how playing Omar on HBO’s “The Wire,” which ended a decade ago, had a long-lasting impact on his career as an actor.