The "Sharp Objects" finale and the dangers of white women's tears

HBO's summer hit primed us to be observant. But we may have missed what it's telling us about weaponized femininity 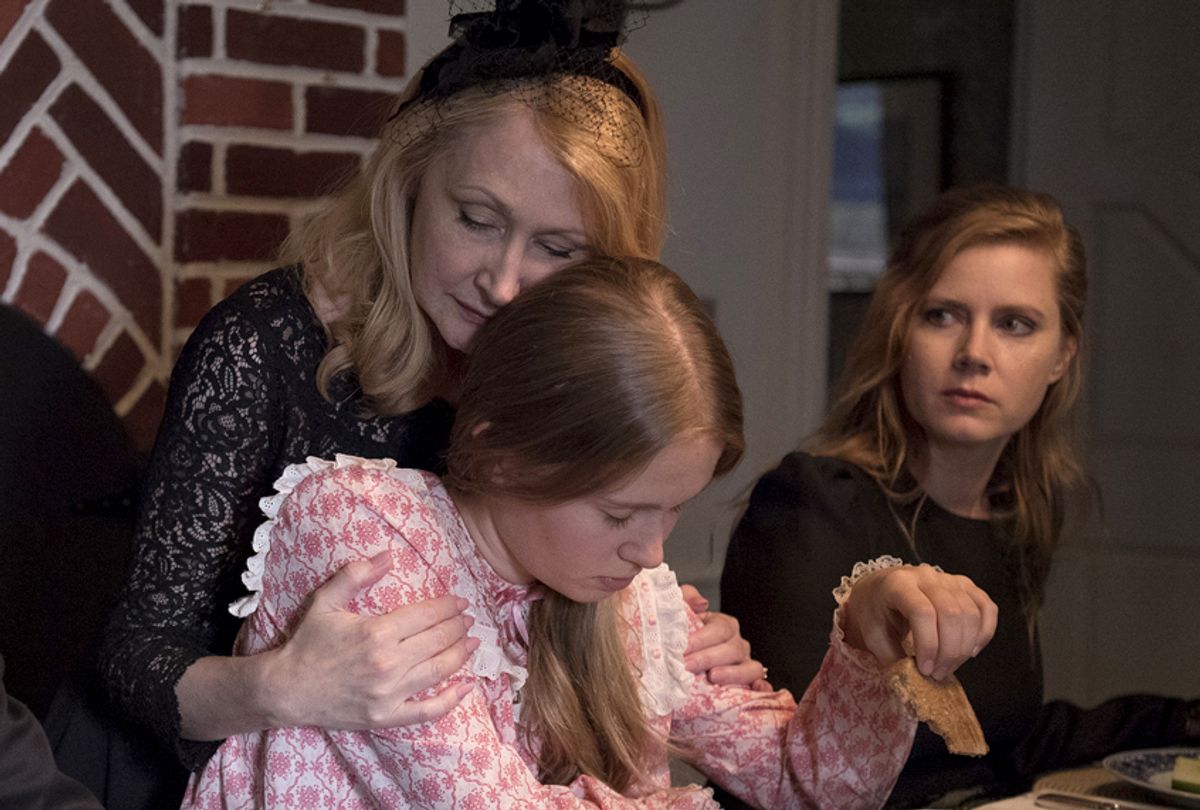 Note: Spoilers ahead for the finale of HBO's "Sharp Objects."

Turns out that HBO's “Sharp Objects” is a story about monsters, when all is said and done: how they are created and coddled, how a steady diet of worship, protection and poison strengthens them. Between Jean-Marc Vallée’s creatively narcotic visuals and the raw writing shaped by Gillian Flynn and Marti Noxon, viewers experienced a story that appeared surefooted about leading us down one dark kudzu-snarled path toward a familiar and predictable end, only to deliver a horrific reveal in the very last seconds.

But this is what the limited series does all along, bleeding memories and folding fragments of past traumas into the present via strategically placed jump scares. All the while, as it primed us to detest and blame Adora Crellin (Patricia Clarkson), the imposing matriarch of the town and Camille’s bitterly estranged mother, Vallée’s (mis)direction hid the truth of it all in plain sight.

For all this time, as the viewer psychologically joined with Camille, feeling and seeing the form her trauma takes, sinking into her drunken darkness, it might not have occurred to her or us how deeply her judgment was compromised. In her drive to solve the mystery of the murders in town and her own story, it may not have occurred to us that the killer we were looking for was, in reality, Amma (Eliza Scanlen) the little girl Camille was so certain needed protecting.

Looking back, a necessity with this series, of course it was Amma. Her angelic Barbie face, her long blonde hair and precocious flirtations make Amma the sort of girl mainstream America prizes, the standard of beauty and femininity. She’s presumed innocent from the get-go, making her the perfect criminal.

“Sharp Objects” and Amy Adams’ Camille Preaker seduced us not with glamour or quotable bitchery like “Big Little Lies,” Vallée’s 2017 feel-weird hit, but by maintaining a sense that something is fundamentally wrong in Wind Gap, Missouri. What’s sickening Wind Gap sits on its surface, easily viewed in the town’s entrenched patriarchal, worshipful view of the Antebellum era and “traditional” family life.

“Traditional” is one of those coded euphemisms whose true meaning, when referring to culture, is almost always connected to some form of subjugation. Flynn’s 2006 novel marinates in this conviction, although a few important plot points in HBO’s version of her story were created specifically for the series — notably “Calhoun Day,” a carnival memorializing the gang rape of a Confederate soldier’s wife.

Adora, Amma and Camille are all types of female characters Flynn enjoys employing to fool us by playing on our assumptions. Her runaway hit “Gone Girl,” published six years after “Sharp Objects,” does something similar with its missing heroine Amy. She is glamorous and flaxen haired and the inspiration for a popular children’s book character, all of which serves to manipulate the audience’s sympathies. (Notice that Flynn seems to have a penchant for names that begin with the letter A, the top of the alphabetical heap.)

Mind you, Adora doesn’t get off the hook merely for being a tool of Flynn’s oeuvre or a product of her environment. While her compulsion to poison her children — including Camille in the finale — killed Camille's sister Marian all those years ago, we can chalk that up to a terrible case of Munchausen syndrome by proxy, a psychological disorder in which a caregiver sickens his or her child to feel needed.

Exceeding that in its evil is her ability to wield fear and strike down anyone who opposes her, even her own flesh and blood, if that adversary threatens to crack her veneer of righteousness or diminish her influence.

Hence it’s no accident on the part of Flynn, Noxon and the show’s other writers that Wind Gap is overwhelmingly white and that Adora is the town’s matriarch. None want to get on her bad side lest she withhold her affirmation of status and her social blessing. Yet Adora is not a politician. She runs her household and sets the standard for how all women should live in Wind Gap. She’s a slender woman with a soft, low voice who dresses her youngest child up like a Victorian porcelain doll and has a protective and henpecked accomplice in her husband Alan (Henry Czerny).

She preaches of goodness, enshrines her family’s history and chides her oldest daughter for having the gall to be mentally ill, for bringing shame to her with her cutting and, presumably, by enduring a gang rape by her classmates.

And in a very real way, Adora and Amma are the embodiment of what’s truly dangerous about white women. They wield their cultivated image of being beyond reproach, a trait gifted them at birth, to inflict pain upon others.

Teenage Amma is only beginning to bloom into that power as she uses it to kill her friends – Ann, Natalie Keene and, horribly confirmed in a mid-credits sentence, her new friend Mae. That moment freezes on a shot of Amma’s teeth, frozen mid-snarl, her blood lust peaking as Mae's fingers curl through the holes in a wire fence.

But the simplest way to characterize Amma is that she is a garden variety sociopath, and a theatrical one at that. In those final moments, we view the evidence: the teeth pulled from the dead girls' mouths. Perfectly bleached roots peeking out from under a bed in her dollhouse, resembling white ballerina slippers. Molars transformed into tile on a floor upstairs, an apt approximation of Adora’s immaculate ivory floor she made sure everyone was afraid to walk on. Then, upon realizing she’s been discovered, Amma’s wide-eyed imitation of innocence as she whispers to Camille, “Don’t tell mama.”

In Sunday’s finale, when Amma dresses up as Persephone, goddess of the Underworld, she explains her character's myth while behaving like a meek, frail child. She’s aware that the costume pleases Adora, demonstrating a knowledge of myths and antiquity that all ladies of proper breeding should possess. But that myth’s association, not only with death and hell but female perfection and virginal innocence, is unmistakable. Persephone is the child of Demeter, and she was her mother’s greatest source of joy until Hades abducted her, robbing her of her purity.

Amma, in her floral crown and dressed in her white nightgown, plays that part for Adora, who wants her daughters to remain weak and reliant upon her. And Wind Gap loves Adora and Amma, because it loves to death its girls and the women who meet with the town’s approval.

Adora is praised for being a caregiver to girls who aren’t her own, even though she was poisoning them. Because caregiving is a woman’s highest calling. Camille, meanwhile, is shunned and insulted for daring to choose career and sanity over marriage and compliance. Wind Gap is a capital of misogyny, and there are few thing misogynists detest more than strong women.

I do not believe that it’s an accident that Mae, Amma’s final victim, is black, although I’m not positing that Amma has somehow refined the murderous impulses to take on a racist flavoring. Mae, like Amma’s other victims, happens to be nearby and takes her mean-girl sniping in stride. Mae also is part of Amma and Camille’s life in St. Louis, where Camille has a family of choice in her mentor Frank Curry (Miguel Sandoval) and his wife Eileen (Barbara Eve Harris).

But Mae’s murder takes on a different meaning in light of everything that’s come to pass over the last year. “Big Little Lies” was, in its dishy way, a sugar-coated ode to female bonding and allyship. “Sharp Objects” is its opposite, playing out a number of ways that women tear each other apart.

Like so many serialized entertainments of late, the finale arrives at the tail end of a long series of incidents and stories about the ways white women wield their status at the top of the Western world’s social ladder. Summertime has been filled with viral videos of white women policing black people’s actions in public spaces, calling the cops on folks for everything from barbecuing in the park to campaigning for office.

One story currently circulating is about a black reporter in Kansas City, Missouri, being fired after two white female colleagues reported her to human resources for having the nerve to post an article on her personal Facebook page from The Guardian about, and this is rich, “how white women use their tears to silence women of color.”

Women of color are not alone in suffering the brunt of white feminine tyranny. A new survey analyzing the effects of sexism on American women, conducted by economists from the University of Chicago, Northwestern University and National University of Singapore, includes some interesting information about the misogyny that these women internalize.

Specifically there’s the finding that Utah, the second-most sexist state in the nation behind Arkansas, also happens to be a state where the female respondents to the survey’s questionnaire showed more beliefs that isolate or devalue women than men did.

This arrives on the heels of an economic survey by WalletHub, that seconds the academy study’s findings, that says Utah is the worst state for women’s rights, behind Idaho. Utah and Idaho, like Wind Gap, are predominantly white.

“Sharp Objects” is a densely layered construct, meant to be viewed and reviewed in pauses and backtracking; Vallée plays with our sense of perception by flashing tangentially connected images in Camille’s flashback snippets.

Most often these take the form of words that fly by quickly enough to make us unsure that we actually saw them, which jibes with the quilt of words Camille has carved into her skin. “DIRT” is written in the dust on her car trunk in an early episode; it appears in the middle of a sequence, then vanishes.

A church banner at Natalie Keene’s funeral reads “HOPE” at first, then changes to “HURT.” The textual cues are everywhere, including on cars (“PUNISH,” “SCARED”) and street signs (as in when a marker that should read “St. Louis” changes to “SPITEFUL”). Camille, a reporter (and as several stories have pointed out, a very bad one) lives in words; they’re etched into her skin and blare in her consciousness. The camera cuts back to certain scars spelled out on her flesh, but one that shows up at a key moment, “WRONG,” is right on her front.

That speaks to Camille and of her, but it also says something other than how we’re reading it.

Camille is one of many women who become Adora’s targets in Wind Gap, even as Amma takes her mean girl reputation to deadly extremes. Then again, at no point could we mistake Amma or Adora for being nice.

When Adora isn’t looking, Amma's expressions take on dangerous impishness. Amma shares gazes with Camille that have a conspiratorial flush about them and never feel entirely innocent, as if she’s always getting away with something.

Her acts of rebellion are familiar in their adolescent insouciance, but the sinister glow in her smiles is something else entirely. They’re the look of someone who relishes the power of being a kind of dangerous woman with the ability to search and destroy. Palpably more frightening is that Amma has already figured out that she’s exactly the kind of American girl who can get away with it.

On Learning to Forgive