Take a cue from the producers who polished "The Apprentice": Editing, the cousin of news judgment, is your friend 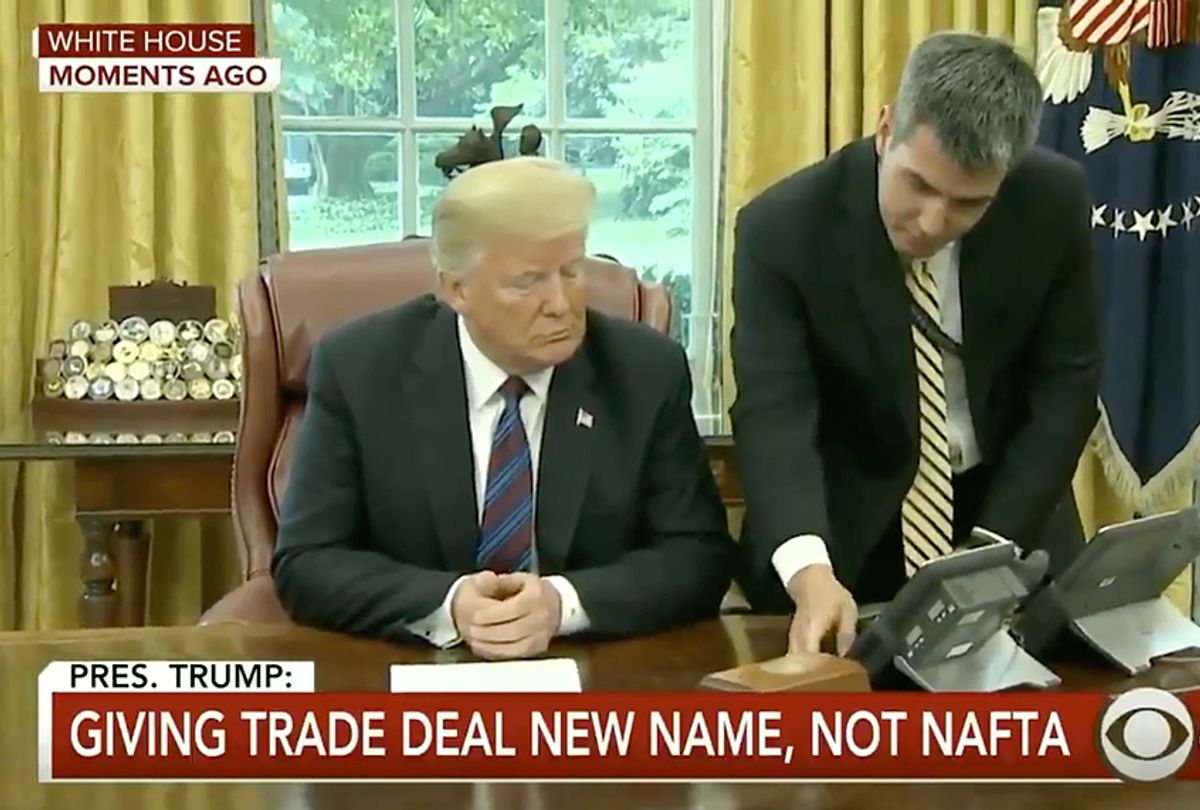 Today, Donald Trump became the president we are all well-aware that he is, again. And yet the cameras keep showing up.

One year and seven months into the Trump presidency this POTUS’ treatment of his office as a performance opportunity is a given. All of us know this. Many of us have also read at least a few takes likening his presidency to a reality show. Yours truly has written at least one or two, with the acknowledgment that such comparisons downplay how dangerous this approach to leadership is. The nation and the world require leaders skilled in nuanced diplomacy and concerned with the welfare of their people and the planet.

Interrupting the flow with a special report, springing from a tweet declaring, “A big deal looking good with Mexico!” might not have been worth it.

Mind you, the newsworthiness of Trump's intent to kill the North American Free Trade Agreement, or NAFTA, is undeniable if, indeed, there were huge news to report. His proclaimed hatred for the 24-year-old trilateral trade deal has been public knowledge for years.  He’s made no secret of his intent to terminate the existing NAFTA agreement, which on Monday he said he would do once he reaches an agreement on terms with Mexico and Canada.

Trump consistently crows about his ability to negotiate a better deal, which his base knows thanks to his frequent referral to “The Art of the Deal,” a bestseller with his name on it that he didn’t actually write.

This brings us to Monday’s all-important “breaking news,” which brought American viewers to attention for about 20 minutes to watch Trump have a rambling feel-good congratulatory exchange with Mexican President Enrique Peña Nieto for coming to a preliminary agreement.

This “stop everything” moment told us three things. One, Trump has not mastered the Art of Using a Speaker Phone, yielding a good hour’s worth of social media revelry.

Two, it provided his base with the illusion of making good on his administration’s transparency, using a favorite tactic of the “Real Housewives” franchise — airing out a conversation via speaker phone.

More accurately, that's what he tried to do.

“It's a big day for trade, big day for our country. A lot of people thought we'd never get here, because we all negotiate tough. We do. So does Mexico,” Trump said, plopped behind his desk. “And this is a tremendous thing. This has to do -- they used to call it NAFTA. We're going to call it the United States-Mexico Trade Agreement, and we'll get rid of the name NAFTA. Has a bad connotation, because the United States was hurt very badly by NAFTA for many years. And now it's a really good deal for both countries, and we look very much forward to it.”

Silence. Trump punches a few buttons, then says to an aide: “You can hook him up, tell me when. Big thing! Lotta people waiting . . . Hellooo? You want to put that on this phone please? Hello?”

Then, to another aide, “Be helpful.”

Trump just tried to use speakerphone on live TV.

It did not go well. pic.twitter.com/ZJRgxOxWUD

Trump making the press sit through a conference call might be his best media troll yet. — Eliot Nelson (@eliotnelson) August 27, 2018

Following that came an extended and very loving give-and-take of jibber jabber that, as Peña Nieto explained via translator, was meant “to celebrate the understanding that we have had from both negotiating teams on NAFTA” and affirm Mexico’s and the United States’ shared interest “to review it, to modernize it, to update it.”

For about 20 minutes of back and forth, Trump expressed his gratitude to Peña Nieto and his negotiating team, and in turn the Mexican president also expressed his appreciation, mentioning between air kisses and an offer of a tequila toast, that while this was a wonderful start he still wanted to make sure that Canada is involved.

And the kicker was Trump telling the current Mexican president before he hung up, “A hug from you would be very nice.” Truly amazing, given that Trump still wants his base to believe that Peña Nieto, or his successor Andres Manuel Lopez Obrador, who takes office December 1, will somehow agree to pay for a border wall.

Will he extend such an offer to Canadian Foreign Minister Chrystia Freeland when she arrives in Washington this week? The safe guess is no, given her original plan to secure a “handshake deal,” according to the Washington Post.

This brings us to that third accomplishment of this media-enabled stunt: to publicly put pressure on the Canadian government to reach its own agreement with the U.S Not necessarily a terrible negotiation tactic, but not one he's technically empowered to make -- Congress gave him the go-ahead to renegotiate NAFTA, not to go to our North American trade partners separately, but whatever. The main beef is whether the viewing public needed to be subjected to a declaration of "THIS IS HAPPENING" in its full nothingness.

Those who chose to suffer through it all, owing to the implied Breaking News label and daytime television stoppage, would not have learned much about what is changing with the existing NAFTA agreement from what Trump actually said, other than teasing that it includes something “very special for our manufacturers and farmers.”

Under Trump, that could mean a lot of things, not all of them positive. Examining the economic and political implications of this 20 minutes of stolen life-energy is a job for others with greater expertise. Purely from the standing of a television news piece, Monday’s Oval Office break exhibits the outstanding problems broadcast and cable news still display in covering Trump, specifically the practice of assigning every story the same level of coverage.

It is important to know that Trump has taken steps toward shifting and possibly renaming NAFTA. It’s less important that we be subjected to an extended version of, “You guys are great!” “No, you guys are great!” “No, seriously…you guys? So much better than Canada, who we’re also talking with this week, and we need to, because the terms we have with Canada are terrible!”

Basically, millions of us experienced what it must be like to be a limo driver listening to a speaker conversation between two blowhard executives who really enjoyed their meeting.

And this could have easily been avoided by remembering what brought us here in the first place. I don’t just mean the television media’s slavish devotion to capturing Trump’s every move on the campaign trail, even bringing everything to a halt to train cameras on an empty podium surrounded by tables heaped with Trump products.

Instead, consider NBC’s years of subsidized leadership branding, carefully crafting the image of Trump as a coherent powerful leader on “The Apprentice” through the magic of editing. Scripting carried some weight too, but the editing makes the man palatable. In journalism terms we’d frame this as a question of news judgment, and digging through the congratulatory noise to share what matters — the fact that preliminary negotiations went well, and that afterward Trump refused to make a comment about the death of his political rival John McCain — would have saved us about 15 minutes.

In that time we could have gotten the important context of what this announcement meant — that it could have economy-shifting implications, but anything final involves Mexico and Canada coming to an understanding and will not become official until Congress signs off on it. Then again, had CNN, CBS News and others taken such care, we would not have had this demonstration of a mechanical communication breakdown. In production parlance that’s known as an outtake, not the top story.