Omarosa won't save us from Trump: Stop hitching your hope to the stars

Don't get too excited about Tom Arnold's tapes or Sacha Baron Cohen, either. This is reality, not reality TV 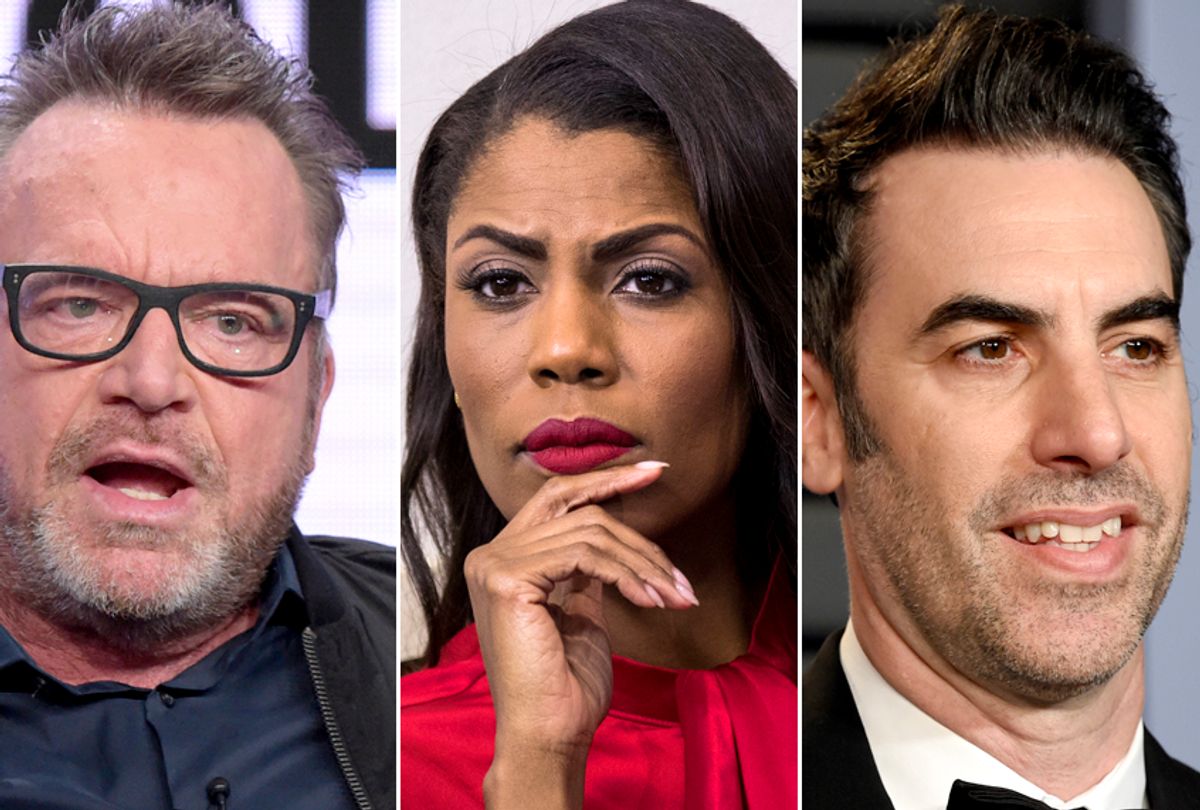 The human gut suspects that we are far too susceptible to those cravings to trust the simple solutions purveyed on our TV shows. Yet millions of us ignored this vital sensory organ when it came down to choosing between an experienced female politician and a reality TV star branded as a successful businessman despite leaving a slew of failed businesses and bankruptcies in his wake.

Donald Trump looked assertive, smart and cocksure on NBC’s “The Apprentice” because a savvy executive producer named Mark Burnett made him appear to be these things. Largely due to Burnett’s fine production magic, millions of voters decided he would make a suitable leader of the free world.

This explains why some of us can’t help but entertain the hope, even fleetingly, that his favorite contestant Omarosa Manigault Newman could be the one to take down her old boss. You gotta admit the idea has a pleasing camera-ready symmetry to it. The apprentice takes down the boss! One villain is the undoing of another! Protein gets out protein!

Reality, the kind in which we’re living, never unwinds with such simplicity. But the thought certainly has entertainment value, especially since we know that Omarosa has tapes.

Look, Omarosa is a jerk, and while we will side-eye people HARD if, after all he's said and done, this is the straw that breaks the camel's back of support for Trump, I'll take it.

Maybe we just needed one horrible reality star to take down another. But seriously, SIDE. EYE.

In between all the other stuff, Omarosa mentions some news that could (potentially) take down the entire Trump administrationhttps://t.co/TCTGlIVALh

And we thought @MichaelAvenatti and @StormyDaniels were going to be the ones to take down @realDonaldTrump. Looking like @omarosa will accomplish this along w #Mueller. Keep releasing #OmarosaTapes. He knows those #Nda don't have a leg to stand on. pic.twitter.com/JfXMEsBo34 — 🍑Precious Peaches ♏ (@cocoabrownj) August 14, 2018

Up until December 2017 Manigault Newman, one of reality TV’s greatest villains magnificently repurposed as Trump’s campaign sycophant, purportedly lurked closely enough to Trump to present a convincing account of any crimes and chicanery that may still be afoot.

Recording evidence of dirty deeds going on in the Oval Office, however, makes Manigault Newman’s long-promised tell-all “Unhinged: An Insider’s Account of the Trump White House," which hit bookstores today, that much more alluring. Those tapes are among the main reasons her media blitz in support of the book is so much more prevalent than Sean Spicer’s.

Manigault Newman also is far more telegenic than Spicer and possesses a chameleonic ability to shape her stories in ways that frame her in the best light, both of which help in this case. She is a smooth villain, and people love to hate Omarosa as opposed to simply finding her repugnant and doltish.

Plus, the publication of “Unhinged” follows Manigault Newman’s time on “Celebrity Big Brother,” itself a promotional tool for her book although, following the teachings of her one-time lord and master, she did not overtly characterize it as such. Instead she dropped hints that she, like, knew some wild stuff.

"I’d like to say it’s not my problem, but I can’t say that because it’s bad," she told fellow “Big Brother” contestant Ross Matthews in a famous clip from an episode. When Matthews presses her to tell America that everything’s going to be OK, she shakes her head. "No, it’s going to not be OK."

Or, wait . . . maybe it will. Because of, you know, those recordings, the existence of which was proved by the playback of a recording of General John Kelly firing her, first presented on Sunday’s “Meet the Press.”

“I have a significant amount, in fact a treasure trove of multimedia backup for everything that’s not only  in ‘Unhinged’ but everything that I assert about Donald Trump,” Manigault Newman tells anchor Judy Woodruff on Monday evening’s edition of “PBS NewsHour.”

So yes: thanks to a medium that built many hours around plot arcs where the heroes conscript a villain to assist in their aims of taking down a greater threat, of course some of us are hoping and praying that Manigault Newman has the plans revealing that flaw in the Death Star, which she is ready to deliver unto special counsel Robert Mueller.

If you’re one of those people please stop it. You’re only hurting your heart and head.

Manigault Newman’s teaser about her tapes is part of a small movement in entertainment starting with “Unhinged” and continuing on Viceland’s eight-episode series “The Hunt for the Trump Tapes with Tom Arnold,” set to premiere on Tuesday, September 18.

Like Manigault Newman, Arnold’s quest is fueled by the ire of knowing that they were close enough to Trump to witness what a terrible human being he is — a racist and a misogynist, Manigault Newman has been confirming to any outlet willing to broadcast her words.

Arnold made the same assertions in a passionate rant in a press conference held recently as part of the Television Critics Association’s summer press tour. Indeed, the entire reason for the show is to expose the version of Trump we didn’t see on “The Apprentice” that exists in the outtakes.

“I’d like [Mark Burnett] to stand up and say, ‘You know, actually, we had to cut out all the lies and the sexual harassment and the insanity and the incompetence. He’s not really that guy. We cut that out. The real guy is this other guy.’ And that’s the tape I want, the 12-hour — one day, one 12-hour day of Trump Tower in that room they use to have the board room and those 18 cameras. . .And I’m going to just keep hammering Mark Burnett until he shows America that, because he’s got $500 million . . . and he never says one word,” Arnold told the journalists attending the panel for the show.

Arnold added, “One thing I have learned from doing this show [is that] four times the producers of 'The Apprentice,' and they had to pull [Trump] out and say, ‘Whoa, whoa, hey bud, you can’t do that on this show.’ That’s something you’re going to see on my f-----g show, OK?”

We get where those feelings are coming from. We want to believe in the power of celebrity and in the undeniability of recorded material. The latter has a noteworthy historical precedent, of course, in the famous Nixon tapes whose existence were revealed during testimony — televised, we should add — related to the Watergate scandal. Congress subpoenaed Richard Nixon to release the tapes, which he refused, prompting articles of impeachment from the Judiciary Committee.

So if Arnold and Manigault Newman are aware of the existence of similarly damning tapes to Trump, this would seem to be the kind of one-two knockout punch that fame-obsessed Americans might finally take seriously.

Such dreaming seems especially and tantalizingly tangible after a summer in which Sacha Baron Cohen’s Showtime series “Who Is America?” has resulted in the resignation of one government official. Otherwise its highest accomplishment has been to reveal how profoundly craven and gullible our elected officials are, especially when it comes to gun control legislation and immigration issues.

Even this series has a few people casting their eyes heavenward with thoughts that possibly, maybe, Baron Cohen’s work will help to turn the tide.

Just a reminder here, in case you’ve hitched your sanity to such notions: America already has all the evidence we need to call Donald Trump a bigot and a misogynist, presented to us live and on Memorex. He gave it to us from the moment he descended that golden escalator. We witnessed it in the famous Billy Bush, “grab ‘em by the pussy” tape. We’re experiencing it in the form of his executive orders leading to children of undocumented immigrants being ripped from their families and caged in for-profit detention facilities. Heck, millions witnessed it in 2013 on “Celebrity Apprentice,” when he remarked to contestant Brande Roderick that seeing her on her knees “must be a pretty picture."

Those heretofore “Apprentice” outtakes Manigault Newman hints may be released prior to the midterm elections aren’t likely to have any greater value than her on camera appearances have now. That is, they would be another distraction from developments that stand to have more significant impact, like what the firing of FBI agent Peter Strzok signals about this administration’s regard for the rule of law.

That said, if Manigault Newman's tapes contain proof, as she posits in an interview with MSNBC, that the president "absolutely" knew about the emails stolen from Democratic presidential nominee Hillary Clinton's campaign before WikiLeaks circulated them, that's certainly worth more than any candid comments Burnett may be hiding.

There is beautiful karmic justice to Michael Cohen, a poor man's Luca Brazi, Omarosa, a reality TV star, and Stormy Daniel, an adult film actress, as the ones who might help take down Trump. It makes sense. Restores order in a chaotic world.

If the FBI’s April raid of the offices occupied by Trump’s former attorney Michael Cohen yields a recording of the president and Cohen discussing payments linked to keeping his affair with Daniels quiet so as not to affect his chances of getting elected, that will be a problem for this administration. Of course, it would only truly be a problem if such evidence yields criminal charges that the president or his surrogates can’t shrug off.

Remember, those famous Nixon tapes contained evidence of a crime that he was hellbent on covering up. Whereas tapes of Trump uttering the n-word or other slurs would only further confirm what we already know about our morally compromised leader. Only showing us the money laundering receipts could possibly yield anything actionable.

So there may be some reason to pin those impeachment wishes upon a star after all. Just not one most of us know from broadcast or cable.

Salon's D. Watkins delivers suggestions that Trump could employ to make his employees be all that they can be.