Conan O'Brien joked about Trump not being invited to McCain's funeral, but suggested an alternative 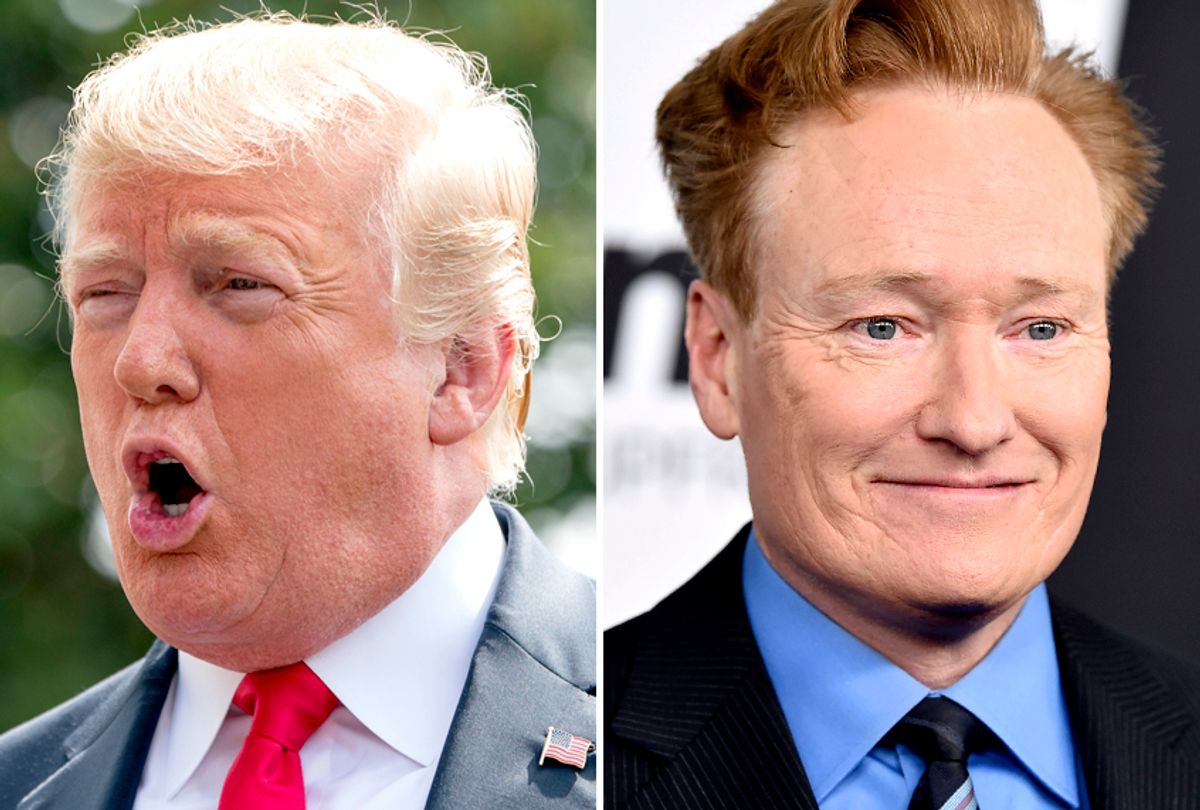 President Donald Trump is not invited to Arizona Sen. John McCain's funeral in Washington — the Republican politician died Saturday from brain cancer at the age of 81 — but late-night host Conan O'Brien had a suggestion for a funeral the president could attend instead.

"In an interview, John Goodman suggested that in the spinoff show, 'The Conners,' Roseanne's character will be dead," O'Brien said Tuesday night, and the audience roared with applause.

"Yeah, so finally a funeral Trump will be allowed to attend!" the comedian deadpanned.

McCain and Trump had long diverged on policy and their approach to politics, and the Republican president was the target of bipartisan criticism for mocking McCain's military service during the 2016 presidential campaign. In May, The New York Times reported — before McCain's death — that his family had requested Trump not attend the senator's funeral. Instead, former Presidents George W. Bush and Barack Obama are expected to speak at the service. Vice President Mike Pence is also likely to attend, according to the Associated Press.

Also, in O'Brien's joke, he referred to a recent revelation provided by John Goodman, who played Dan Conner on ABC's "Roseanne." In a new profile in U.K.'s Times Sunday, he said that his character would be "mopey and sad because his wife’s dead." The detail offered the first insight into how ABC planned to handle the sudden absence of the show's matriarch.

In May, ABC fired Barr and canceled her namesake sitcom after the Trump-loving star posted a racist tweet about former Obama aide Valerie Jarrett, who is an African-American woman. ABC Entertainment President Channing Dungey described the tweet as "abhorrent, repugnant and inconsistent with our values."

Given that "Roseanne" was ABC's first No. 1  show in 18 years, the network was eager to find a way to move the sitcom forward without Barr. In June, Barr agreed to sign her rights over so "200 jobs of beloved cast and crew could be saved," she said in a statement. And ABC was able to green light "The Conners" with the original cast, minus Barr. The spinoff is slated to premiere this fall.

Barr has insisted that her tweet was misinterpreted, as she did not know that Jarrett was black. While she has since apologized for the tweet, Barr also continues to assert that she is not a racist. That is a point on which Goodman agrees.

"I know, for a fact that she’s not a racist," he told the Times Sunday. Goodman added that he was "brokenhearted" and "surprised" at the cancelation of "Roseanne" and added, "that’s probably all I should say about it."

Trump and Barr also had an interesting relationship. When "Roseanne" first returned to TV after two decades off the air, and to exceptional ratings, the presidential called Barr, who is a Trump supporter both on the show and in real life, to congratulate her on the revival's ratings. When the racist tweet occurred, the president made the situation all about himself.

"Bob Iger of ABC called Valerie Jarrett to let her know that 'ABC does not tolerate comments like those' made by Roseanne Barr," Trump tweeted. "Gee, he never called President Donald J. Trump to apologize for the HORRIBLE statements made and said about me on ABC. Maybe I just didn't get the call?"

And O'Brien was not finished there with Trump. "Speaking of Trump, it's been reported that President Trump's relationship with Jeff Sessions is 'beyond repair,'" the comedian continued. "Yeah, apparently their relationship is so bad and awkward, Trump now refers to Sessions as Melania."