Louis C.K. allegedly made an "uncomfortable" joke about rape whistles – and people were laughing

"I was just sitting there like, 'Oh my f*ck. This is so uncomfortable and so disgusting,'" one eye witness alleged 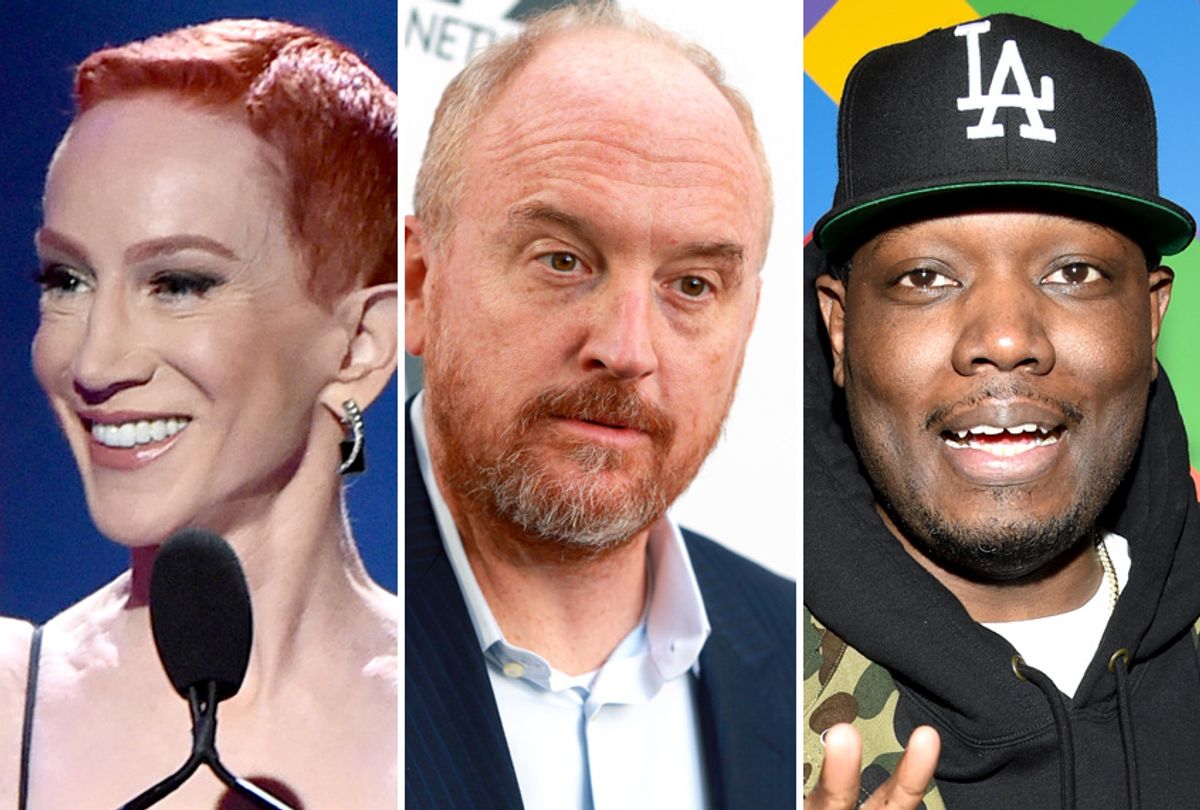 Louis C.K., the comedian who admitted to masturbating in front of multiple women without their consent less than a year ago, returned to the stage Sunday night at the Comedy Cellar and to an instant ovation. The Cellar's owner, Noam Dworman, told the New York Times that C.K. made a surprise appearance and did a 15-minute stand-up set featuring "typical Louis C.K. stuff," he said, including jokes on parades, racism and waitresses’ tips. "It sounded just like he was trying to work out some new material, almost like any time of the last 10 years he would come in at the beginning of a new act," Dworman continued.

According to Vulture, who spoke to two women who were in the audience during the performance, aside from racism, overtipping waitresses, and parades, C.K. also made an "uncomfortable" joke about rape whistles. "When he said 'rape whistle' people were laughing, and I was just sitting there like, 'Oh my f*ck. This is so uncomfortable and so disgusting.' Everyone around me was laughing. That was just depressing," one woman said. Although both women testified to the largely warm response from the audience, they said reactions seemed divided across gender lines.

"It was an all-male set to begin with. Then, it’s sort of exacerbated by [C.K.’s] presence," one of the women told Vulture. "If someone had heckled him, I think they would’ve been heckled out. It felt like there were a lot of aggressive men in the audience and very quiet women. It’s the kind of vibe that doesn’t allow for a dissenting voice. You’re just expected to be a good audience member. You’re considered a bad sport if you speak out."

Since the Times story, comedians and comedy fans have debated the validity of C.K.'s return to the mic. On Tuesday, Kathy Griffin wrote a long Twitter thread, where she described C.K.'s performance as a victory for comedy's "white boys club."

Griffin, who was fired from CNN and dropped from many appearances after posing with a bloodied mask of President Donald Trump, added: "Louis just went on a long vacation and didn't do anything to show that he has reformed/changed. He's a multi-millionaire who finally got some sleep after working nonstop for years. This is how we are making people are paying penance in the #MeToo era? Fucking pathetic."

Several women comedians echoed Griffin's point that C.K. has made no effort of restoration. While his initial apology said he would "step back and take a long time to listen," his comedy set featured neither reflections from the past year nor any form of acknowledgement of why he had to step back in the first place. The revelation that C.K. made a tone-deaf rape whistle joke only adds to this argument.

TV creator and write Nell Scovell wrote on Twitter that forgiveness must be joined with "restitution," and this should go beyond simply contemplation, instead using one's voice and resources "to support" and "promote women" and "change the system."

Comedian Aparna Nancherla tweeted about the incredibly low standard for men to make amends following incidents of sexual misconduct: "Louis C.K. getting a standing ovation for dropping in to a comedy club less than a year after admitting to sexual misconduct tells you all you need to know about how society applauds powerful men for doing less than the minimum of decency."

Even Dworman was surprised at the swiftness of C.K.'s return. "I didn’t think it was going to happen as soon as it did," he told the Times. "I had thought that the first time he’d go on would be in a more controlled environment. But he decided to just rip the Band-Aid off."

Stand-up comedian Jackie Kashian responded to that point directly, asking: "He was the one wounded I presume?"

But at least two male comedians had a different take. Comedian Michael Ian Black seemed to celebrate the news of C.K.'s performance. "Will take heat for this, but people have to be allowed to serve their time and move on with their lives," he wrote on Twitter, referring to a social outcast sentence perhaps. "I don't know if it's been long enough, or his career will recover, or if people will have him back, but I'm happy to see him try."

"What’s interesting to me about these articles against Louis C.K. performing again is how important fame is to people," Che said. "A lot of what I read says that C.K. shouldn’t get to be a 'famous' comedian anymore. Because to them, he’s still winning. Isn’t that strange?"

"Meaning he can be shamed, humiliated, lose millions of dollars, lose all of his projects, lose the respect of a lot of his fans and peers and whatever else that comes with what he did," Che continued. "But since he can still do a comedy set for free at a 200 seat club a year later, it means he got off easy. That’s how coveted fame is."

When some of his followers objected to his reasonings and suggested that C.K.'s business as usual set on Sunday night would only open up the door for more opportunities for him, paid and otherwise, Che responded: "Who’s to say what someone should be 'allowed' to get? I mean, who makes that decision? You? The law? Jesus?"

And when a follower asked Che what he thought C.K. "deserves," he responded: "Man, I don’t really know. I haven’t talked to him in a while. I don’t know any of his accusers. I don’t know what he’s done to right that situation, and it’s none of my business. But I do believe any free person has a right to speak and make a living."

Finally, when one follower brought up the issue of the women comics, who endured C.K.'s harassment, and who have since faced more backlash and harassment, and possible career repercussions, Che was not familiar with any of it.

It was telling. So much of the conversation around forgiveness, redemption and comebacks in the era of #MeToo has centered around the men: How will their careers be affected? When can they come back? Doesn't everyone deserves a second chance? Meanwhile, the women are forgotten.

"Since speaking out, I’ve experienced vicious and swift backlash from women and men, in and out of the comedy community. I’ve received death threats, been berated, judged, ridiculed, dismissed, shamed, and attacked​," comedian Rebecca Corry, who C.K. allegedly masturbated in front of without her consent, wrote for Vulture in May. "The idea that C.K. reentering the public eye would ever be considered a 'comeback' story is disturbing. The guy exploited his position of power to abuse women. A 'comeback' implies he’s the underdog and victim, and he is neither. C.K. is a rich, powerful man who was fully aware that his actions were wrong. Yet he chose to behave grotesquely simply because he could. The only issue that matters is whether he will choose to stop abusing women."

As the criticism of C.K.'s surprise set continues to roll in, Dworman gave an interview with the Hollywood Reporter about the comedian's unannounced appearance. He said just one man complained afterward in an email about feeling ambushed by C.K.'s set, but in general, the response was overwhelmingly positive. Dworman added that some of the outrage about C.K.'s comeback signals a larger phenomenon of "a dark period for discourse in this country."

One woman who spoke to Vulture found Dworman's claim ironic. "You hear this big, loud guy sitting next to you, yelling, 'Oh, it’s so great to have you back, Louis,' and people cheering and giving him a standing ovation," she said. "Our voice is definitely not going to be prioritized in that space. [Dworman] says we can’t [have a discourse] properly. How do you think the women in that room felt? It’s just really frustrating."