Louis C.K. is back: Who says #MeToo ruins men's careers?

It looks like Matt Lauer might be returning to TV, too. Time's up, apparently, on repercussions for harassment 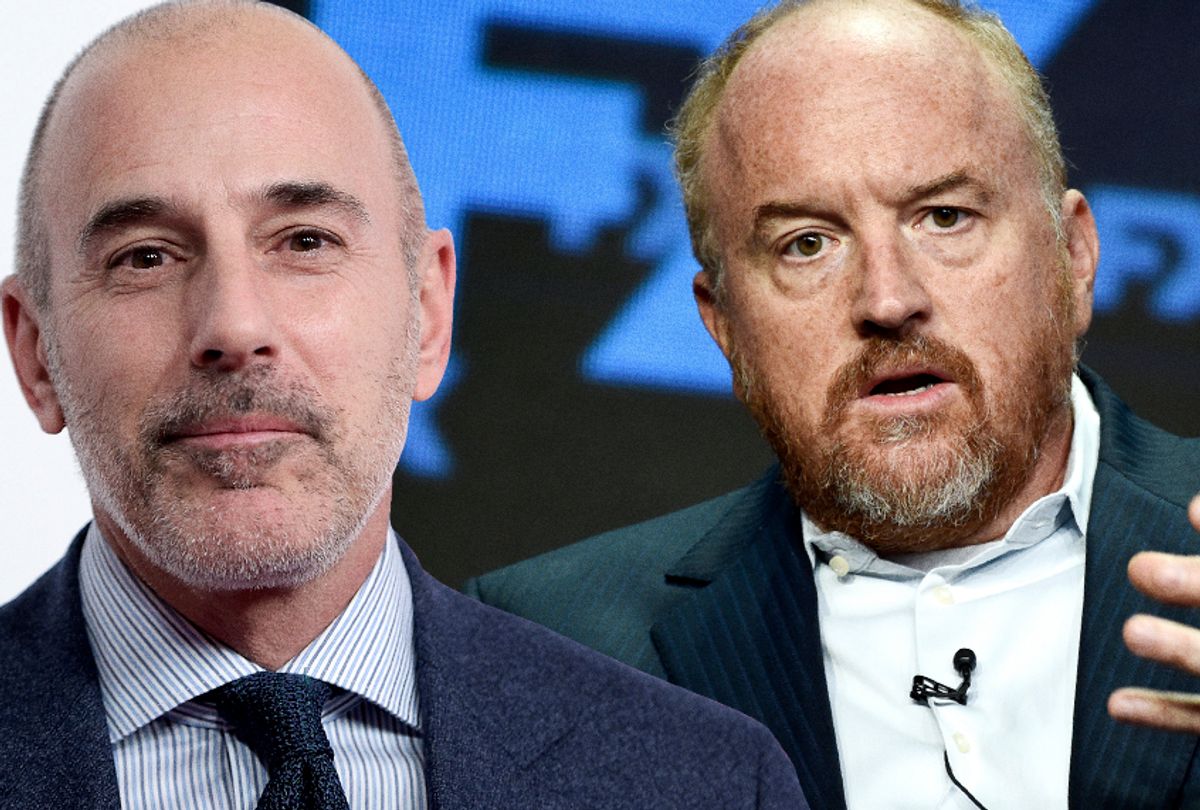 They're doing it for the fans, you see.

It was perhaps inevitable that, like tax day and acid wash denim, these famous men accused of misconduct would return. However they may be doing financially — and with their long track records of lucrative television shows, films and development deals, I'm guessing they're not hurting for subway fare — all the comforts in the world can't give them what they for so long enjoyed in near nonstop daily doses: industry respect and public adulation. That's where we apparently come in.

Fortunately for these men, however tarnished their brands may now be, they've still got their devotees. C.K.'s Television Academy page describes the six-time Emmy winner as "one of the most honest and respected comedic voices of his generation." And the reception he received on Sunday at the Cellar was a warm one. The Times says that the sold-out crowd gave his surprise appearance an ovation before he even began, and that while one audience member called the club Monday to say he'd have preferred some advance warning, "several other patrons responded to a standard email follow-up from the club to say they were happy they caught the show."

Remember November, when in the midst of misconduct revelations against C.K., The New Yorker was panning his "I Love You, Daddy" as "a story of wounded rich-white-male pride…. a disgusting movie that should never have been acquired for distribution in the first place"? Flash forward to now. Comic Mo Amer, who was also on the Cellar bill Sunday, describes C.K.'s recent reemergence as "like, classic Louis, really really good."

Comedy Cellar owner Noam Dworman, meanwhile, acknowledges that some people may be unhappy with the booking, but that "There can’t be a permanent life sentence on someone who does something wrong." Well, yes and no. After all, we literally do have permanent life sentences on people who do wrong things; it's called the justice system. The way it works — albeit rarely to everybody's complete satisfaction — is that when a person does wrong, it's supposed to be followed by atonement and effort to make things right. You may never be able to forgive Michael Vick, but Michael Vick was responsible for horrible cruelty to animals, went to prison, and has since worked with the Humane Society to fight against cruelty to animals and lobbied to protect pets. That's a good example of a person who seems to be making the long-term effort of reparation.

Even actor/writer/director Casey Affleck, clearly eager to move on from allegations of misconduct and promote his new projects, seems to have at last received the memo on how express an understanding of the fundamentals of contrition. Speaking with the Associated Press earlier this month, Affleck, whose "The Old Man & the Gun," premieres at the Toronto International Film Festival in September, said, "I behaved in a way and allowed others to behave in a way that was really unprofessional. And I'm sorry." But here's the kicker. He continued, "I know just enough to know that in general I need to keep my mouth shut and listen and try to figure out what's going on and be a supporter and a follower in the little, teeny tiny ways that I can. And we do that at our production company and I try to do it at home, and if I'm ever called upon by anyone to help in any way and contribute, I'd be more than happy to."

Time will tell if Affleck follows up, but the dude said a clear "I'm sorry," and then stated some specific actions he could take going forward to not just better himself but the industry in which he works. Contrast this with Matt Lauer, who last year approached accusations of sexual harassment and misconduct by croaking out a mea culpa for "the damage and disappointment" and then going silent. Watch and learn, high profile screwups. Watch and learn.

In his statement, C.K. made clear what he thought was going on, saying, "The power I had over these women is that they admired me…. I learned yesterday the extent to which I left these women who admired me feeling badly about themselves and cautious around other men who would never have put them in that position. I also took advantage of the fact that I was widely admired in my and their community… I wish I had reacted to their admiration of me by being a good example to them as a man and given them some guidance as a comedian, including because I admired their work." So that's four references to other people admiring him, one to him admiring them. He said then that he was going to "step back and take a long time to listen."

Did he listen, I wonder, to Rebecca Corry's Vulture essay on how he put her in a 'lose-lose' situation, saying, "Admitting what you did, and justifying it with 'I always asked first,' is not the same as apologizing"? Did he hear her when she said, "A 'comeback' implies he’s the underdog and victim, and he is neither. C.K. is a rich, powerful man who was fully aware that his actions were wrong"? Or did he take that in and decide, after a period of several months out of the limelight he seems to thrive on, that the moment was right to do a set on what the Times said included "racism, waitresses’ tips, parades"? Did he choose, once again, to bask in a little of that "admiration" he's received so often in the past? Whatever gets you off, I guess.

On Twitter Tuesday, Michael Ian Black planted his flag for Team C.K., saying, "People have to be allowed to serve their time and move on with their lives. I don't know if it's been long enough, or his career will recover, or if people will have him back, but I'm happy to see him try." I'm sorry, I wasn't aware that having "I Love You, Daddy" pulled from distribution and not going on stage for nine months was an actual prison sentence.

Black continued, "We're in a cultural moment in which some men who do terrible things have no pathway for redemption." Yeah, I'm pretty sure there is a path, and that path is not waiting and hoping people forget it ever happened. If one lame statement about how admired you are and a few months on the bench is enough to earn the good graces of others, fine. But if you're wondering why a lot of people like me are still pissed, it's because we don't really owe anyone forgiveness without amends.

A few weeks ago, I was at a downtown ice cream shop with my daughters when in walked C.K. with his daughter. The two sat next to us, and seemed to be going mostly unobserved until another patron, roughly C.K.'s age, came over. The man patted the comedian on the shoulder and said something that sounded like "Stay strong." As he headed out the door, C.K. thanked him. It was a bit surreal. A dad's got a right to take his kid out for a peaceful ice cream trip on a hot day, and he doesn't have any control over the people who approach him. But there was something about this moment of bro-to-bro bonding, unfolding as I sat there with my own daughters, that made me suddenly nauseated enough to toss the rest of my cone. I recalled the times my girls have had to move out of a subway car because a guy was exposing himself, the times I've had some delusional acquaintance grind his bulge up against my obviously reluctant body. I thought of all the women I know who've truly "served their time," suffering real consequences and lost opportunities for speaking up and out. I'm sure C.K.'s new material is great. A man's talent doesn't disappear just because his selfish behavior has been revealed. But it definitely can make a former fan lose her taste for it.

Tarana Burke on #MeToo for all

"I wasn't the only person this happened to"