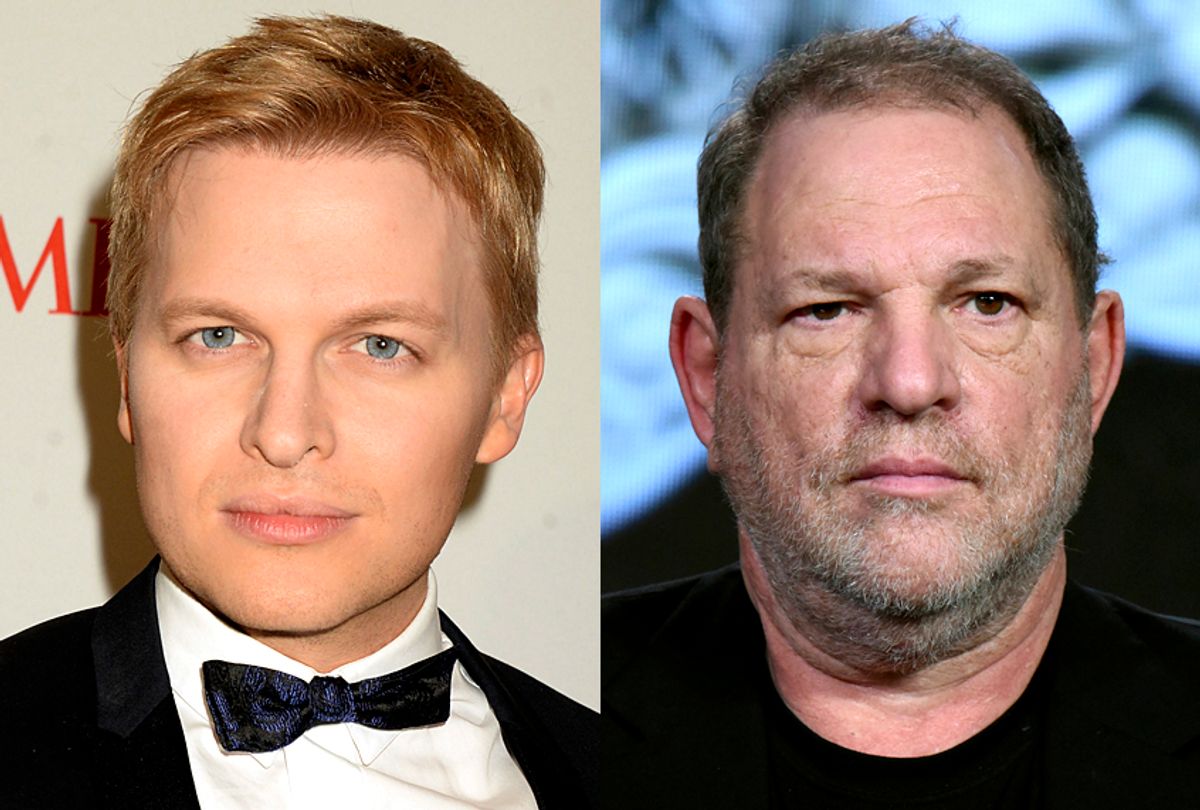 Ronan Farrow spent months investigating sexual assault and harassment allegations against Harvey Weinstein for NBC News, before Farrow's Pulitzer Prize-winning exposé was published in the New Yorker last October. The network has said that Farrow's reporting was not ready for air, as he did not have an alleged victim of Weinstein who was willing to go on record.

But now, a year after Farrow left NBC, Rich McHugh, a producer who worked on the story with him, has accused the network of trying to block their Weinstein reporting. McHugh told the New York Times that the obstruction came from "the very highest levels of NBC":

McHugh, the producer, who recently left his job in the investigative unit of NBC News, is the first person affiliated with NBC to publicly charge that the network impeded his and Mr. Farrow’s efforts to nail down the story of Mr. Weinstein’s alleged sexual misconduct. He called the network’s handling of the matter "a massive breach of journalistic integrity."

Farrow's first Weinstein exposé was published in the New Yorker nearly two months after he stopped reporting it for NBC, according to the Times, and helped to launch the #MeToo movement onto the national landscape. McHugh says he and Farrow had worked on the story at the network for eight months, and has said that NBC was "resistant" throughout the entire process, before, in his words, finally opinion, "killing the Harvey Weinstein story" in August of 2017.

"Three days before Ronan and I were going to head to L.A. to interview a woman with a credible rape allegation against Harvey Weinstein, I was ordered to stop, not to interview this woman," McHugh told the Times. "And to stand down on the story altogether."

NBC disputes McHugh's claims. "He was never told to stop in the way he’s implying," Noah Oppenheim, the president of NBC News, told the Times. "We repeatedly made clear to Ronan and Rich McHugh the standard for publication is we needed at least one credible on-the-record victim or witness of misconduct," he added. "And we never met that threshold while Ronan was reporting for us."

Rich Greenberg, executive editor of the NBC News investigative unit, echoed Oppenheim. "The problem was, we didn’t have a credible accuser on the record, on camera," he said. "The one we had the closest hope of getting, Rose McGowan, pulled out. She’d never say Harvey Weinstein’s name on camera with us."

Oppenheim said that Farrow had asked to pursue the Weinstein story for another outlet, to which NBC News agreed. After that, Oppenheim said Farrow requested the use of a NBC crew to shoot the interview in Los Angeles, which the network declined.

Shortly after Farrow's Weinstein exposé was published, he seemed to suggest that NBC had mishandled the story when he was reporting it at the network. "I walked into the door at The New Yorker with an explosively reportable piece that should have been public earlier. And immediately, obviously, The New Yorker recognized that." he told Rachel Maddow during an appearance on her MSNBC show last October.

"And it is not accurate to say that it was not reportable," Farrow continued. "In fact, there were multiple determinations that it was reportable at NBC. I will say that over many years, many news organizations have circled this story and faced a great deal of pressure in doing so. And there are now reports emerging publicly about the kinds of pressure that news organizations face in this. And that is real."

Farrow is also writing a book, "Catch and Kill," where he is expected to weigh in on his time investigating the Weinstein story at NBC.

In the Times article, Farrow praised McHugh's collaboration during his time at NBC. "Rich is a fantastic producer and journalist," he said. "He’s a person of integrity, and he cared deeply about the investigative stories we worked on together and the importance of seeing them through."

After the Times story appeared, NBC News released a statement that read, in full:

The assertion that NBC News tried to kill the Weinstein story while Ronan Farrow was at NBC News, or even more ludicrously, after he left NBC News, is an outright lie.

In August of 2017, after NBC News assigned Ronan Farrow to investigate Weinstein and supported his reporting efforts for eight months, Farrow believed his reporting was ready for air. NBC disagreed because, unfortunately, he did not yet have a single victim of – or witness to – misconduct by Weinstein who was willing to be identified. Dissatisfied with that decision, Farrow chose to leave for a print outlet that he said was willing to publish immediately. NBC News told him “we will not stand in your way,” and allowed him to take his reporting to The New Yorker, where, two months later, he published a strong piece that cited the following victims by name: Asia Argento, Mira Sorvino, Rosanna Arquette, Lucia Evans, Emma de Canes, Jessica Barth, and Sophie Dix. Not one of these seven women was included in the reporting Farrow presented while at NBC News.