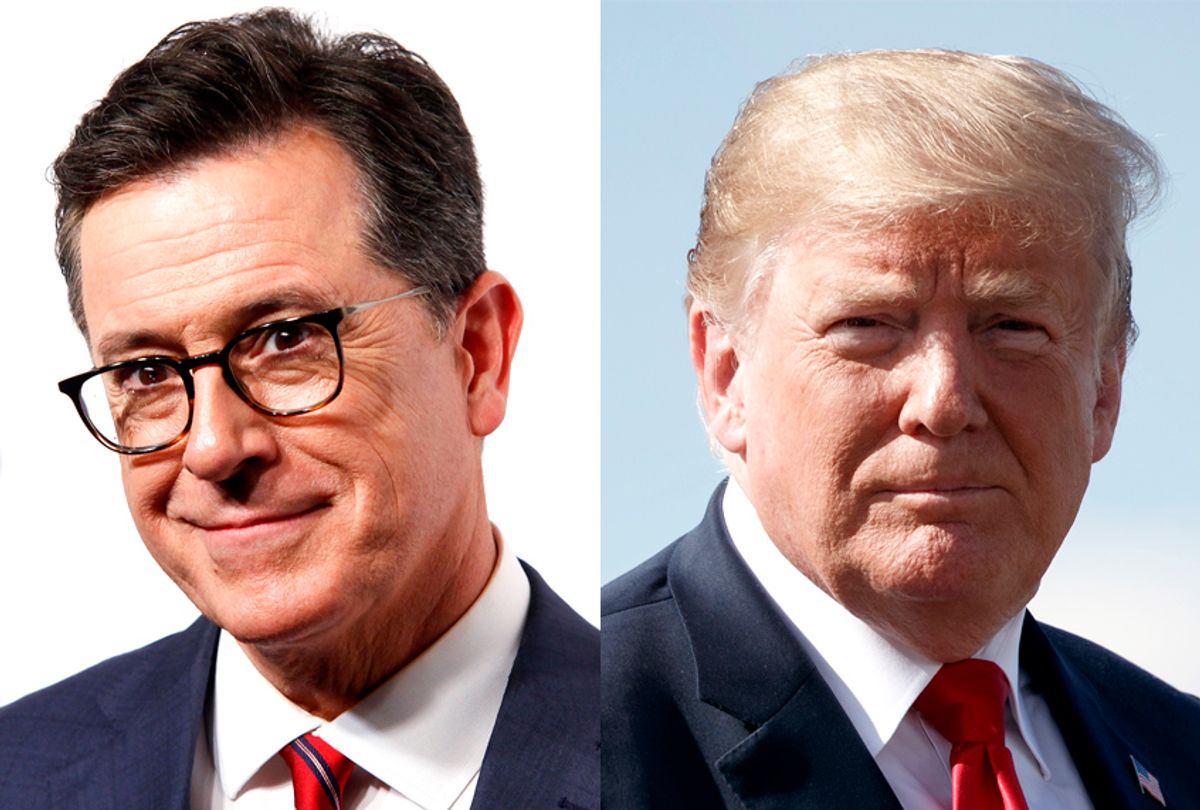 At 54, Stephen Colbert may think he's "a little old for this job," as he told Rolling Stone recently, but in many ways, he's at his career zenith. "The Late Show with Stephen Colbert" became the most-watched show in late-night this past season and there's talk that the Emmy-nominated comedian could take back the coveted Outstanding Variety Talk Series crown from two-time winner John Oliver at the Emmys this year.

After 11 years at "The Daily Show" and nearly another decade at "The Colbert Report," the television veteran spoke to Rolling Stone in a new interview about his journey, disappointing men and President Donald Trump.

Colbert revealed that in his early acting days, he had so much anxiety around success and how he would survive that he needed to be medicated. "I mean, in the most common, prosaic way," he said. "Xanax was just lovely."

Colbert continued, "I had a bit of a nervous breakdown after I got married — kind of panic attacks. My wife would go off to work and she’d come home — because I worked at night — and I’d be walking around the couch. And she’s like, 'How was your day?' And I’d say, 'You’re looking at it.' Just tight circles around the couch."

Of course, Colbert did go on to find work in entertainment, and an early job was with "The Dana Carvey Show," which aired for just one season in 1996 and where Louis C.K. was one of his bosses.

"Louis is a brilliant comedian. And it probably is a different experience for a fan. Because I knew him when nobody knew him," Colbert said of C.K.'s admission to sexual misconduct. "So, it’s just being brokenhearted to see somebody who lied to his friends and mistreated other people. You’re as disappointed as you would be in any person. But finding out about Bill Cosby? That’s heartbreaking on a level that completely changes your view of their work. I don’t have an intimate relationship with Louis’ work. I knew him 20 years ago, for five months, and I consider him a friend, and we kept up with each other occasionally. But Cosby, that was deeply heartbreaking, and that really changes formative memories of your life."

Colbert added that he'd always imagined "men to be pretty bad" but the revelations of the past year "has certainly lowered the bar even further." Perhaps, it's that pessimism about the disastrous capabilities of terrible men, that left Colbert so visibly horrified during his Showtime special on election night.

"There is nothing that has happened since Trump became president that wasn’t in my fear matrix about him," the comedian told Rolling Stone. "Now, all the horrors that you can see dawning on my face on that Showtime special have only been borne out. Nothing about Trump and Putin, nothing about his caging children, nothing about him saying, 'There’s good people on both sides [referring to Charlottesville].' Nothing about his handing the reins of power over to just a rogues' gallery of anti-regulation, pro-pollution, anti-union, anti-women [officials] in any way surprises me. It’s all what I thought would happen. Which is why I was truly horrified."

There is one Trump controversy, however, the Colbert called "highly overblown."

"I think that's a completely unfair critique of Jimmy Fallon's show. You do not go to Jimmy Fallon's show for political satire or even political discussion. He's an entertainer and he's brilliant," Colbert said of his competitor's infamous 2016 tousle of Trump's hair. "People blame his ratings on that. But I think people just have a different appetite right now for political comedy. I think it's highly overblown, that hair-ruffling thing."

But Colbert said, he had to find the jokes and Trump's presidency has helped to crystallize "The Late Show's" message, and that's telling viewers: "you are not crazy."

"As a Catholic, I was taught that the worst thing was heresy because not only are you sinning, you’re also dragging somebody else into your sinful state," Colbert continued. "Well, Donald Trump is a heretic against reality; he lives in this fantasy world where only his emotions count and therefore only his reality is real. But he’s also saying, 'Everybody else, your reality isn’t real.' And so all you have to do is go, like, 'Hey, you’re not crazy.' That’s the thesis statement. Your reactions, your emotions are valid — you actually feel that way. The world is as you perceive it. Don’t let anybody say you’re crazy. This is not what America is meant to be about."

Colbert isn't ready to think about his show after Trump just yet, as he said he isn't even thinking about the next day's show when he's crafting "The Late Show" each night. But he warned, "I don’t think I’m making any news when I say history’s not gonna be kind to him. But in some ways it’ll be less kind to the people who defended him."