Conservatives whine that traditional education is under attack from the left. They have no facts to back that up 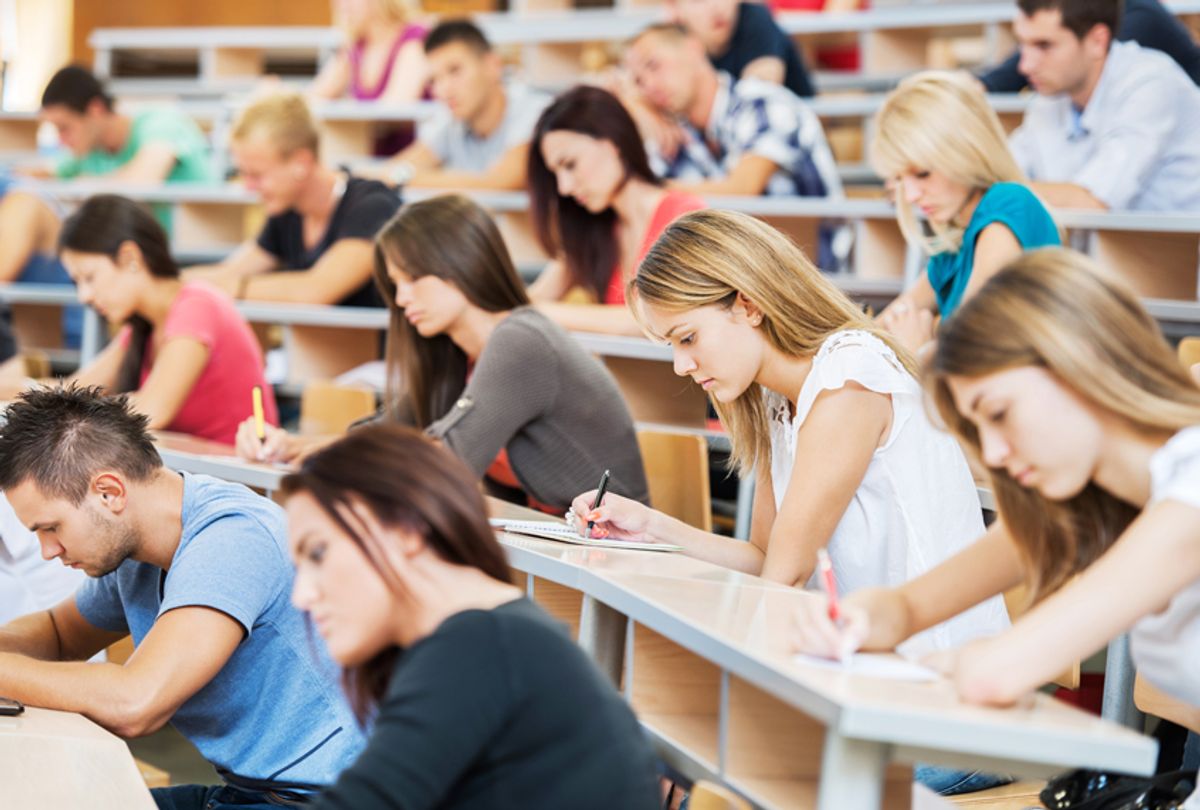 It’s that time of year again. Students pour onto college campuses, move into dorms and start attending classes.  And at exactly the same time that the college school year is starting up, we get yet another theory about why higher education is in crisis and college students are at risk. It wouldn’t be the start of the academic calendar without someone suggesting that everything the university is doing is wrong and that they have the answer for how to fix it.

READ MORE: College bound after a brush with death: How do you let your kid go when you almost lost her?

While there has been sharp analysis on the topic, like Christopher Newfield’s “The Great Mistake,” for the most part the books about the status of higher education focus on the idea that universities are overrun by lefty professors and lazy, entitled students.

The latest is a book by Warren Treadgold, “The University We Need,” which posits that universities are in trouble, controlled by a leftist oligarchy hell-bent on abandoning a traditional education. “Almost all American universities have grown less interested in education and more interested in ideology,” Treadgold writes in a companion essay to the book. “The professors and administrators who are still interested in traditional education are becoming steadily fewer and less visible.”  The only way to fix them, he argues, is to create a wave of new private universities. In John Leo’s review of the book for the Wall Street Journal, he describes Treadgold’s book as an appeal to “rethinking college.”

These right-leaning attacks on higher education have a long history.  There is also a long history of experts countering those attacks, most especially with data that shows that faculty and their universities do not turn their students into liberals, do not change their political affiliations, and do not indoctrinate them. There simply is no consistent evidence to back the right-wing claims that universities are brainwashing students into lefty acolytes.

There is a pattern here.  The right frets about the ideological indoctrination of the young. Experts prove those worries wrong. And we repeat the process pretty much every year.

But there is one facet to Treadgold’s argument that has come under less scrutiny.  And that is the question of what is happening in terms of “traditional” education. Ever since Dinesh D’Souza’s “Illiberal Education” and Allan Bloom’s “The Closing of the American Mind” we have been hearing that “traditional” knowledge is at risk at universities. Treadgold simply echoes their arguments, some 30 years later, adding in his vision for a new slate of privately-funded, right-wing friendly institutions.

According to Treadgold, universities harbor an increasing intolerance toward traditional points of view, often, in his opinion, coming close to censoring traditional viewpoints.  He claims that the campus left virtually controls colleges and universities and he calls out the humanities as the place where the worst offenses take place. Rather than teach students about Western civilization, he argues, humanities departments focus on victim groups and their oppressors.

Typically, this sort of claim boils down into a fight over the content of these courses and the relative merits of what takes place in them. Given that my own training is in the humanities, it is hard to resist tussling with Treadgold on the pros, cons and outcomes of humanities course content.

But rather than do that, I’d like to take a different tack and just do some math.  Because as tempting as it is to debate Treadgold on his accusations of what happens in humanities classes, the simple truth is that he’s entirely wrong about the type of training students get at universities. In fact, as the numbers show, most students in higher education programs have an almost negligible exposure to courses that offer content susceptible to ideological slanting.

In 2015-16, the most recent year tracked by the National Center for Education Statistics, postsecondary institutions conferred approximately 1.9 million bachelor's degrees. More than half of those degrees were concentrated in 6 fields. Here’s how they break down:

Overall, 355,000 bachelor's degrees (18 percent) were conferred in STEM fields.  When we add that number to the business majors we get almost 40 percent of all students.

It is critical to stop and pause to process this data because it shows that the bulk of the courses taken by students in the majors cited above simply has no room for the sort of left-wing moonbat material that Treadgold suggests is overtaking college classrooms and causing a national crisis.

Neil Gross reminds us that the majority of college classes are filled with technical material. He cites an engineering professor, who was asked how politics factored into his teaching, "a chunk of metal doesn't have politics," the professor explained.

To drill down on just one scenario, a student at Penn State University majoring in accounting will have no more than 12.5 percent of their classes even potentially in the humanities. Even if we assume, and it would be a massive assumption, that all of those classes were focused on the sorts of topics that agonize the right, like women’s literature or gay art, it simply makes no sense to consider those classes as a statistically significant part of their college experience.

The cornerstone of Treadgold’s argument is the idea that traditional academic studies are under attack. For the most part, it seems that for Treadgold “traditional” means conservative, but he also uses “traditional’ as a counter to “ideological.” He suggests that scholars with “traditional training and scholarly interests” are literally dying off, claiming that in 20 years it may be hard to find 1,000 first-rate scholars in the United States.

But Treadgold needs to practice those very same traditional skills he thinks are lacking in university training—like analyzing data. In 2015, humanities majors represented less than 12 percent of all majors. Most of the nearly 1/5 of college students who major in STEM fields will take no more than 3-4 arts and humanities classes over the course of their studies. Their schedules may also include language courses, where conjugating verbs and learning proper syntax, for example, can’t be considered an ideological task.

I know that for some on both the left and the right simply studying Spanish feels like a political act, but it’s time to dial down the hysteria and the hype and realize that, for the most part, college education is geared towards helping students gain expertise in a range of fields.

Students majoring in political science, for instance, will take statistics classes, which offer little room for politicization. Sure, they might also have a course on Western imperialism and, sure, the material in that class may trigger conservatives, but, even in a class with that sort of topic, much of the work will be dedicated to teaching students better analytical skills, stronger writing, facts about events and how to conduct research. The point is that even in the most potentially ideological sort of class a lot of basic skills are at the heart of course material.

Even more significant, there is a growing trend among higher education institutions of dismantling, merging and eliminating humanities programs and departments. If anything shows risk of dying off, it is the study of the humanities itself.

But that’s not the picture painted by higher ed critics like Treadgold. They inflate the significance of the humanities, a field that captures far less attention among students than these conservative critics want to admit. To be fair, much of that inflated rhetoric is a direct response to left-oriented scholars who describe the university as a site that is inherently political. That view argues that merely teaching students to think critically, to engage with the world, to develop themselves as civic actors and to question the status quo is political. This is a good and important debate. But it needs to be conducted within the real context of student experiences and class schedules.

And it leads to another serious issue: Despite the fact that Treadgold suggests that lefty humanists control the decision-making of institutors of higher education, the facts don’t back him up. As is true throughout the university, the humanities and humanists are in a minority across university leadership in all major decision-making roles. This is especially true of the top levels of leadership.

But it isn’t just that the humanists are outnumbered by STEM faculty; we are seeing a rise of non-academics taking on leadership positions. In 2012, 20 percent of university leaders came from outside of academia. In 2016, 14 percent of university presidents at doctoral degree granting institutions had had their previous appointment outside of academia. We have seen high profile meltdowns from these hires, such as the mess created by Tim Wolfe at University of Missouri in 2015, but, overall, attention to the impact of university leadership falling outside of the hands of academics is non-existent among right-wing commentators.

So how does Treadgold’s worry over the lack of “traditional” expertise square with the rise in non-academics being hired to run universities? If anything, it is the rise of non-academics as university leaders that should be cause for concern.

Instead, however, the right creates a straw man argument against a powerful, academic left that doesn’t exist. And they do so with the not-so-subtle goal of dismantling faith in our universities — a move that is gaining traction among the public. Gallup reported in February 2018 that trust in colleges and universities was at 23 percent, with only 12 percent of republicans having confidence in these institutions.

And that makes my point. The reason why trust is so low is because unsubstantiated versions of higher education like Treadgold’s dominate public opinion. Would Republicans have such a low view of universities if they knew that 19 percent of all students study business? And would the public in general have such limited trust if they actually knew what students were doing in their classes?

Maybe as we all head back into our classes we should invite our critics to come join us. My guess is that it might lead them to realize that what we need to rethink isn’t college; it’s all of the arguments against it.