Now Trump is even complaining about Sean Hannity's coverage of him: "He puts up all these losers!"

"I've got to talk to him," Trump said of the Fox Newser with whom he is said to "frequently partake in pillow talk" 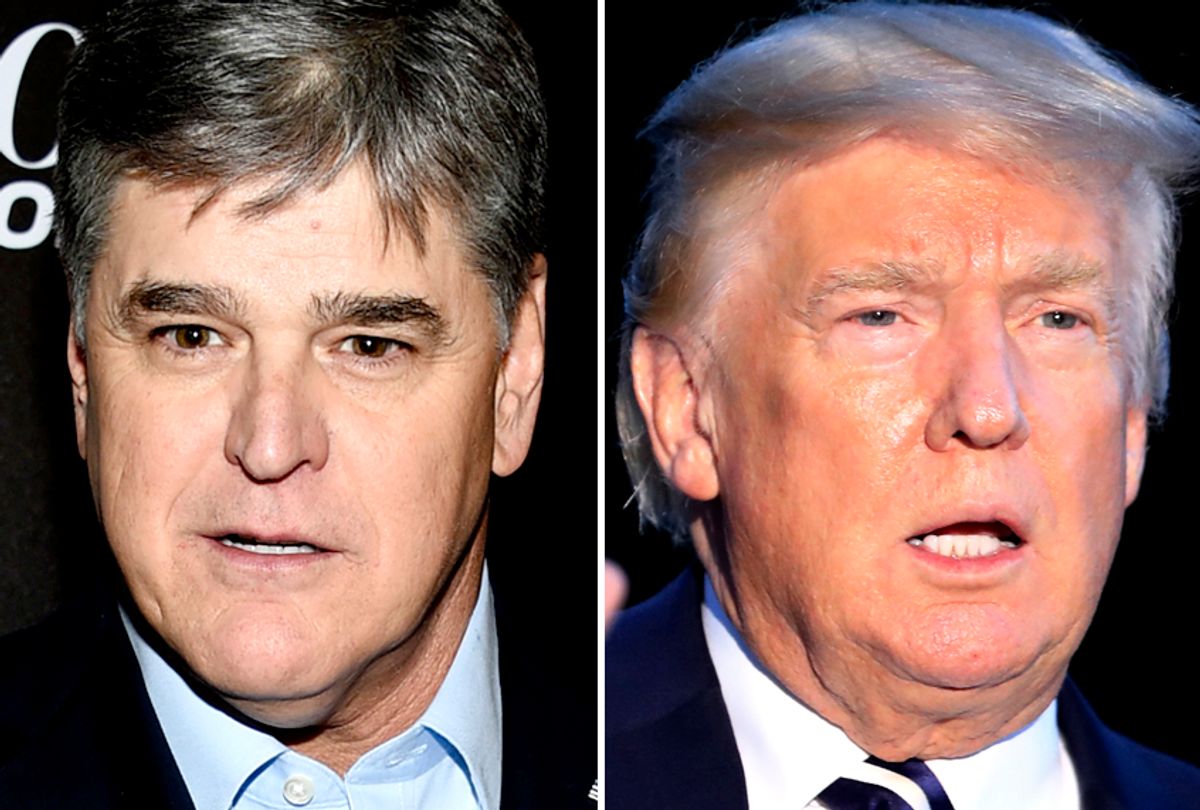 President Donald Trump took the stage in Billings, Montana Thursday night and launched into a round of scathing attacks against Democratic lawmakers, "deep state operatives," vulnerable Democratic Sen. Jon Tester in Montana, the media and critics who have raised fresh questions about his fitness for office and authority over his administration.

In between warning his supporters what the future of the country could look like if his political rivals regain control of the House of Representatives and try to impeach him, Trump took the time to complain that Fox News' Sean Hannity was far too critical of him.

"Do we love Sean Hannity, by the way?" Trump began on a positive note. "I love him."

"But here's the only part," the president continued. "He puts up all these losers that say horrible things – I've got to talk to him– one after another. 'Donald Trump, he's lost it up here.' You know, it is pretty tough. I stand up here giving speeches for an hour and a half – many times without notes – and then they say, 'he's lost it.' And yet we have 25,000 people showing up to speeches."

"And, by the way, look at all the fake news back there," Trump added.

Trump's rare rebuke of Hannity seems to suggest that even his close relationship with the conservative host has its limits.

As Salon's Joseph Neese previously wrote, Trump and the Fox News star "frequently partake in pillow talk," and their "not-so-secret bromance is reportedly maintained by virtue of late-night phone calls, which routinely hit the White House switchboard after Hannity's 9 p.m. ET broadcast wraps. Albeit the duo is said to be be known to chat 'multiple' times a day."

During his campaign rally, Trump also slammed Democrats over what he described as "sick" attacks against his nominee for the Supreme Court: Judge Brett M. Kavanaugh.

"He's doing really well,” Trump said, pointing to Kavanaugh's tense three days of confirmation hearings in front of the Senate Judiciary Committee. "But do you believe the anger and the meanness on the other side? Sick – it's sick!"

"[Kim Jong-Un] likes me. I like him," the president said. "Who knows what is going to happen!"

"One of my best meetings ever was with Vladimir Putin, and they said, 'He was too nice,'" Trump told his supporters. "They wanted me to have a boxing match on this stage."