During rally in Montana, Trump blasts the media and the deep state – then claims he's not angry

Trump launched into a round of scathing attacks against Democrats, the "deep state," Sen. Jon Tester and the media 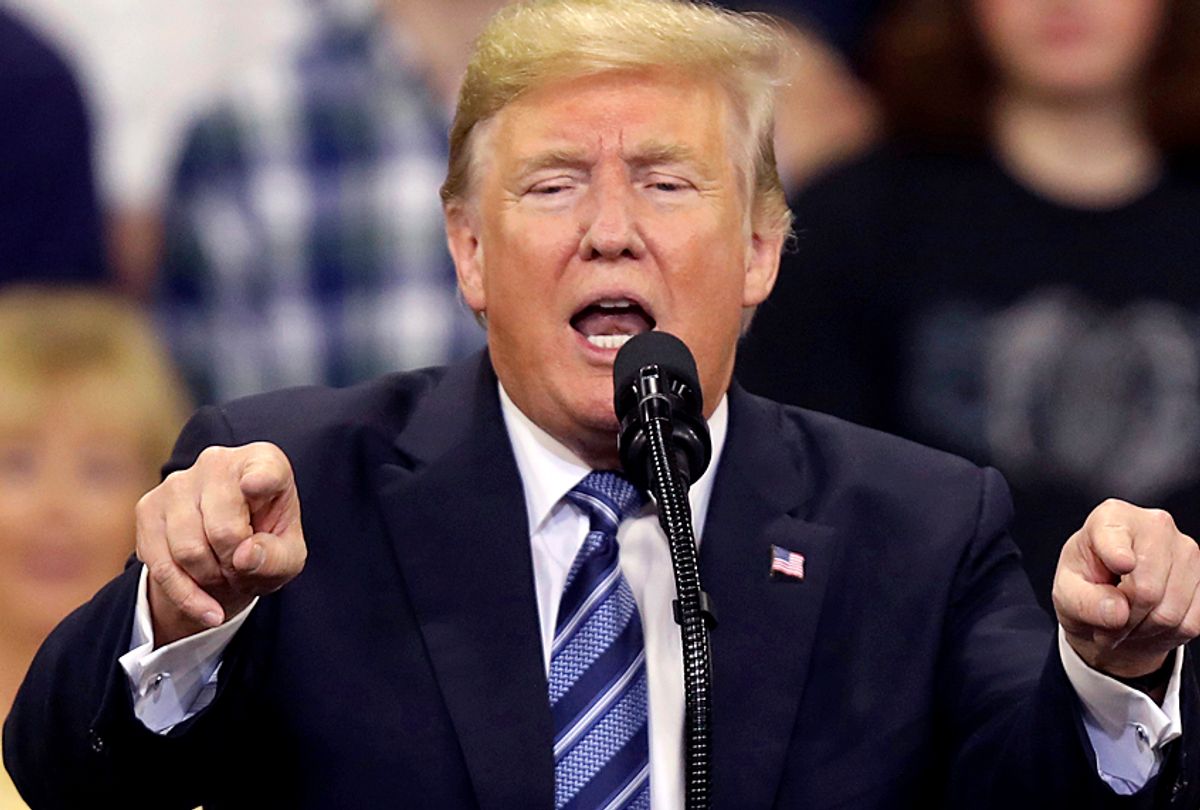 President Donald Trump took the stage in Billings, Montana Thursday night and launched into a round of scathing attacks against Democratic lawmakers, "deep state operatives," vulnerable Democratic Sen. Jon Tester in Montana, the media, and critics who have raised fresh questions about his fitness for office and authority over his administration.

Trump also warned his supporters what the future of the country could look like if his political rivals regain control of the House of Representatives and try to impeach him.

"If it does happen it's your fault, because you didn't go out to vote," Trump said, after warning that impeaching him would turn America into a "third world country."

"You'll have a country that's going to turn into a third-world country because if the opposite party becomes president, every time before it even starts, before you even found out whether or not he or she is going to do a great job, they'll say, 'We want to impeach him,'" Trump said.

"If that happened, every time a Republican or a Democrat — opposite — got elected president. Let's say a Democrat gets elected . . . and let's say we have a Republican House. We will impeach that Democrat, right?" Trump continued, warning against the idea.

Trump also slammed Democrats over what he described as "sick" attacks against his nominee for the Supreme Court, Judge Brett M. Kavanaugh.

"He's doing really well," Trump said, pointing to Kavanaugh's tense three days of confirmation hearings in front of the Senate Judiciary Committee. "But do you believe the anger and the meanness on the other side? Sick, it's sick!"

"[Kim Jong Un] likes me, I like him, who knows what is going to happen!" he said.

"One of my best meetings ever was with Vladimir Putin, and they said 'He was too nice,'" Trump told his supporters. "They wanted me to have a boxing match on this stage."

Trump also suggested that he's not as mad about the recently published anonymous, damning New York Times op-ed, which revealing that an internal "resistance" movement is brewing inside Donald Trump's White House, as reports indicated. He said that he's been focusing on trade negotiations with Canada instead.

"They had me stomping around screaming with anger up in my area of the White House where I live with my wife and son, Barron. They had me screaming, shouting like a lunatic. I had six people in my office, I was in the oval office, we are having a talk on trade, it actually happened to be trade with Canada. And they said 'Sir, you are not up there screaming and ranting and raving. You're here talking,'" Trump said.

"Nobody knows who the hell he is. Or she," Trump said referring to the anonymous writer. "But they said he. But probably that's a little disguise," Trump said. "Unidentified deep state operatives who defy voters to push their own secret agendas are truly a threat to democracy itself. And I was so heartened when I looked, I think it's backfired."

Trump also praised Rep. Greg Gianforte (R-Mont.), who was convicted last year for assaulting a reporter, as a "fighter."

"He's fought in more ways than one for your state," Trump said. "He is a fighter and a winner."

The president appeared angry as he recalled Sen. Jon Tester's treatment of his former personal physician, Adm. Ronny Jackson, who withdrew himself from consideration as VA Secretary amid accusations of misconduct that he fostered a hostile work environment while serving as head of the White House medical unit.

"One of the saddest things I've seen is when Jon Tester — and what he did to a great, great man Adm. Ronny Jackson," Trump said. "Adm. Jackson was subjected to horrible lies and smears, and I'm a victim of that too but I'm kind of getting used to it. At least it's my job. I guess I'm a politician. Think of it!"

Before taking the stage at his rally, Trump spoke with Fox News' Pete Hegseth at a separate side platform in the arena for an interview.

The president, again, said the Times should not have published the Wednesday op-ed.

"Well number one, The Times should never have done that because really what they've done is virtually, you know, it's treason," Trump said, repeating a statement he made on Twitter earlier this week. "You could call it a lot of things."

The president expressed that he's more frustrated that the author penned the op-ed anonymously, because he thinks it's easier to discredit something negative written about him when the author isn't anonymous.

"When somebody writes and you can't discredit because you have no idea who they are, usually you'll find out it was a background that was bad, it may not be a Republican, it may not be a conservative, it may be a deep state person that's been there a long time," Trump said. "We don't know where — it's a very unfair thing, and it's very unfair to our country and the millions of people who voted for us."