Smart Watch: "The Deuce" returns with more strut in its street tales

Plus, Jim Carrey returns to series television in "Kidding" and PBS seduces with "Masterpiece: The Miniaturist" 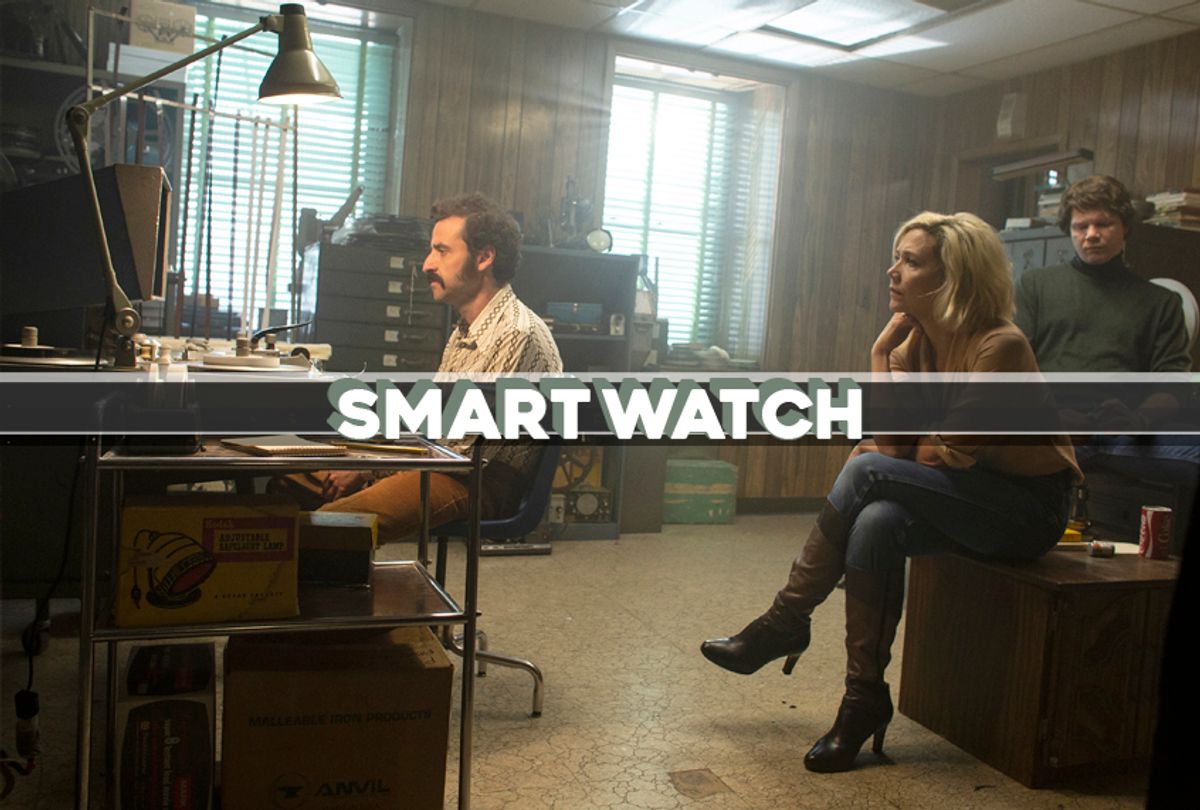 “The Deuce,” returning for its second season Sunday at 9 p.m. on HBO, terrifically illustrates the allure of David Simon's greatest characters via one of his newest, Maggie Gyllenhaal’s Eileen Merrell, known on the streets as Candy. When we first meet Candy in season 1 she's a bedraggled streetwalker fervent in her insistence upon remaining a free agent.

Seeing the scum, garbage and violence endemic to her stretch of Manhattan’s 42nd Street in 1971, Candy’s choice of independence may seem brave and foolhardy. Certainly the pimps attempting to cajole and menace her into joining their stable make it so.

But Candy is smart. She knows the only way up and out is to maintain power and control. With chameleonic subtlety, Gyllenhaal evokes in Candy a sense of fatigue but even more than this, a keen hope, and a capitalistic willingness to learn and earn. Where the men and women around her seek stability in building and staffing bordellos and peep show booths, Candy sees a safer and more lucrative future in dirty pictures.

The opening moments of season 2 show a time shift to 1977 NYC, the disco age. The Palladium, one of New York’s legendary dance clubs, was barely a year old. The even more iconic Studio 54 opened that year. Candy struts the same streets, only this time with a new sense of liveliness and the confidence of a big cat.

Giving life to Candy’s stroll, in her lush fur and open-toed sandals — a different sort of bravery on a street strewn with garbage, broken glass and needles — is her part in an industry she was savvy enough to jump into five years prior, on the ground floor. Now that pornography is all but mainstream in American culture, Candy isn’t merely a sex worker. She’s a director, writer and producer. Candy is a star.

“The Deuce” brims with gutsy roles and performances like Gyllenhaal's, reflections of some version of Simon’s and co-creator George Pelecanos’ vision of America. They create people who grind their way from the bottom upward, claws-out fighting for every solid inch of their rise. The ones we love for that endurance have our affection forever.

And because the first season, in all its rawness, smoothed the introduction from acquaintances to old friends between premiere and finale, these new episodes are a relief, emotionally speaking, compared to the freshman run's tone of gutter-verité which, though impressively honest, made "The Deuce" tough to watch at times.

The New York of 1977 is a different place, culturally speaking, standing at the divide between the ostentatious excess of the early ‘70s and the brazen punk scene of the decade's late side. That energy infuses these new hours with new sparkle and a nervy snarl.

Much more than this, however, the second season pays dividends to the viewer in the form of taut and lively performances. “The Deuce,” like “The Wire” and “Treme,” has a populous ensemble cast that Simon and Pelecanos serve well. Some characters receive more screen time than others, particularly James Franco, who has an executive producer title. He plays twin brothers Vinnie and Frankie Martino, the embodiment of the light and dark morality that drives this story.

Frankie is always going to be trouble for Vinnie, who manages a bar and does his best to keep his nose clean despite his business ties to the local mob. But as important as the Martino boys are to the main plot's framework, they're not so imposing as to stymie other characters from development.

Vinnie’s bar remains a favorite stop for the night shift workers in the area, and there’s still light and hope to be found there thanks to Abby Parker (Margarita Levieva), Vinnie’s lover and partner, and a woman experiencing twinges of shifting social consciousness. On the law enforcement side Chris Alston (Lawrence Gilliard Jr.) is now a detective working a murder case who still cares for the people in his area, unlike his colleagues who would exploit them or cast them aside.

Changing winds force Gbenga Akinnagbe’s Larry and Gary Carr’s C.C. to work the pimp game harder, but the women who once depended on them, like Darlene (Dominique Fishback) and Lori (Emily Meade), recognize the lucrative possibility and increase in respect available to them in adult cinema.

But it’s Candy, and Gyllenhaal, who stands out. With heated poise and resolve, her character personifies how the tables haven’t only turned in the sex industry, but how she and women like her are bent on upending them. “You can’t bitch slap a camera,” Eileen tells a pimp aspiring to get in on the action. She knows it’s all about power and control, and success means taking ownership of both for as long as possible.

These two concepts dominate this slice of history, and they also make “The Deuce” feel even more exciting in this new season, not to mention more palatable. As was true in season 1 these new episodes call upon the talents of an impressive team of writers and directors, male and female; Richard Price, Chris Yakaitis and Anya Epstein write the next three episodes, with Steph Green and Uta Briesewitz directing the third and fourth.

And in New York, as an official (played by new cast member Luke Kirby) tells Gilliard’s detective, two of the city’s greatest crimefighters are “sheet rock and cranes.” The world they all know is being razed, re-zoned and gentrified into obsolescence.  The tension of that transformation, along with the grit and fight in these characters, promises to be fascinating.

If you’re not already invested in this drama, you may find this season to be shinier, brighter and more seductive than before.“The Deuce” was already an excellent drama. Now it’s definitively one of the best shows on TV.

Reuniting Jim Carrey with director Michel Gondry yields pretty much exactly the sort of magical, surreal and slightly twisted drama anyone who has seen “Eternal Sunshine of the Spotless Mind” might expect.  Both stories explore the fragility of human emotion: in “Sunshine” Carrey’s character grapples with the rippling effect of an intentional erasure of a lost love from his memory. Here, he plays a man smiling his way through the agony of grief he can’t forget.

Carrey’s Jeff, the central protagonist of "Kidding," is popularly known as Mr. Pickles, the perpetually juvenile host of “Mr. Pickles’ Puppet Time.” In this world Mr. Pickles commands the same level of reverence reserved for Fred Rogers, in that he's able to regress even the most hardened hearts back to a state of wonder and vulnerability.

"Kidding" establishes this at the top, opening with Mr. Pickles’ guest appearance on "Conan." Sliding into a guest chair right next to weathered movie heavy Danny Trejo, Mr. Pickles points to Trejo’s gigantic necklace charm, which reads “P-Hound,” and asks what the “P” stands for. The audience laughs at what should be an implied bawdy joke except, later, it becomes clear that Jeff, very much a grown-ass man, wasn’t joking. He really has no idea that “P” did not stand for “purse.”

But that scene proves how easily Mr. Pickles softens everyone in his orbit. Conan O'Brien and his studio audience already are on his side. Once he starts playing a song on his signature ukulele (adorably named Uke-Larry) everyone compulsively starts to sing along. Even the cameraman. Even tough guy Danny Trejo.

Mr. Pickles is obviously a national treasure gifted with magical ability to soothe, to make all things better. But there’s nobody to do the same for him; as his executive producer Seb (Frank Langella) reminds Jeff, he’s contractually obligated to keep his gloom under wraps. His estranged wife Jill (Judy Greer) resents his inability to break character. His own son Will (Cole Allen) detests his father’s sensitivity.

This conspires to make “Kidding,” created by Dave Holstein, one of those deceptive 30-minute experiences that's sweet and off-putting in the same jab, hovering somewhere between comedy and tragedy. Carrey’s Jeff is a man trapped inside a world of artificial innocence, struggling mightily to radiate that reality into the world by teaching his young viewers difficult truths about life. Such as, say, death. Or gender fluidity.

“Kidding” is Carrey’s first regular television role since starring in the seminal sketch comedy “In Living Color,” and those who remember his larger-than-life caricatures from that series, like Fire Marshal Bill, are right to marvel at how many leagues he’s traveled with his artistry. Holstein designs Carrey's role to capitalize upon what we know best about him, especially his sanguine smiles and rubberized buffoonery. The actor places those qualities into Jeff in a way that captures the damage and frailty sorrow creates in a person.

As such, “Kidding” displays the potential to be vastly endearing although, initially, its inability to be pegged as one kind of show or another can prove frustrating at turns. The first few episodes also are too slow in capitalizing on Catherine Keener’s charisma; she plays Deirdre, the show’s head puppet maker in the midst of her own personal crisis, slowly boiling over at home. Holstein’s focus on Jeff leaves Keener underutilized, at least in the first couple of episodes.

But as Jeff slides toward his inevitable split with reality we can only expect that everyone closest to him will have more work to do, if only in reaction to the aftershocks of virtuousness imploding.

Every since “Downton Abbey” left the air, “Masterpiece” and PBS have been in want of a similarly attractive pop culture phenomena. This limited series, based on Jessie Burton’s 2014 novel, will not fill that void in the long term. It only consists of three parts, after all.  But in a just world it would be as significant as a draw, even if only for the short term.

Anya Taylor-Joy nails the quavering frustration of Petronella Oortman, a late 17th century child of bankrupt aristocrats who is whisked off to Amsterdam. There, she become the teenage wife of wealthy merchant Johannes Brandt (Alex Hassell). He’s handsome, generous and doting; he’s also often absent. Whenever Petronella conveys her desire for marital intimacy, he gets squirrelly. Weirder, however, is the overbearing cruelty of Johannes’ dour and prim sister Marin (Romola Garai), who seems unnaturally clingy and affectionate towards her brother. Their cagey servants (played by Paapa Essiedu and Emily Berrington) aren’t particularly warm to Petronella, either.

And when Johannes makes a gift of an intricate dollhouse to Petronella, inviting her to stock it with miniatures fashioned by a local artisan, the story really accelerates the creepiness.

Maybe you see where this is going. Unless you’ve read the book, however, don't be so sure.

The cinematography in “The Miniaturist” imitates a Vermeer masterpiece's interplay between light and shadow, engulfing the action in mesmerizing glow that both augments and glamorizes the weight of what is essentially Petronella’s imprisonment. But the real treasure here is Garai’s icy meanness, which singlehandedly props up the rigid atmosphere within that grim home. Her Marin has an aversion to the ostentatious (which is the core of her brother's trade, leading to scenes of fussiness) and to sweetness — which Petronella seems at first to be made of. The clang of their personalities takes on a comedic quality that at times edges its way into parody. That is meant as a compliment, and you'll appreciate how nicely it sugars the intrigue.

Why Interpol Records to Analog Tape