When I came out to my parents, kimchi fried rice held us together

An essay with food 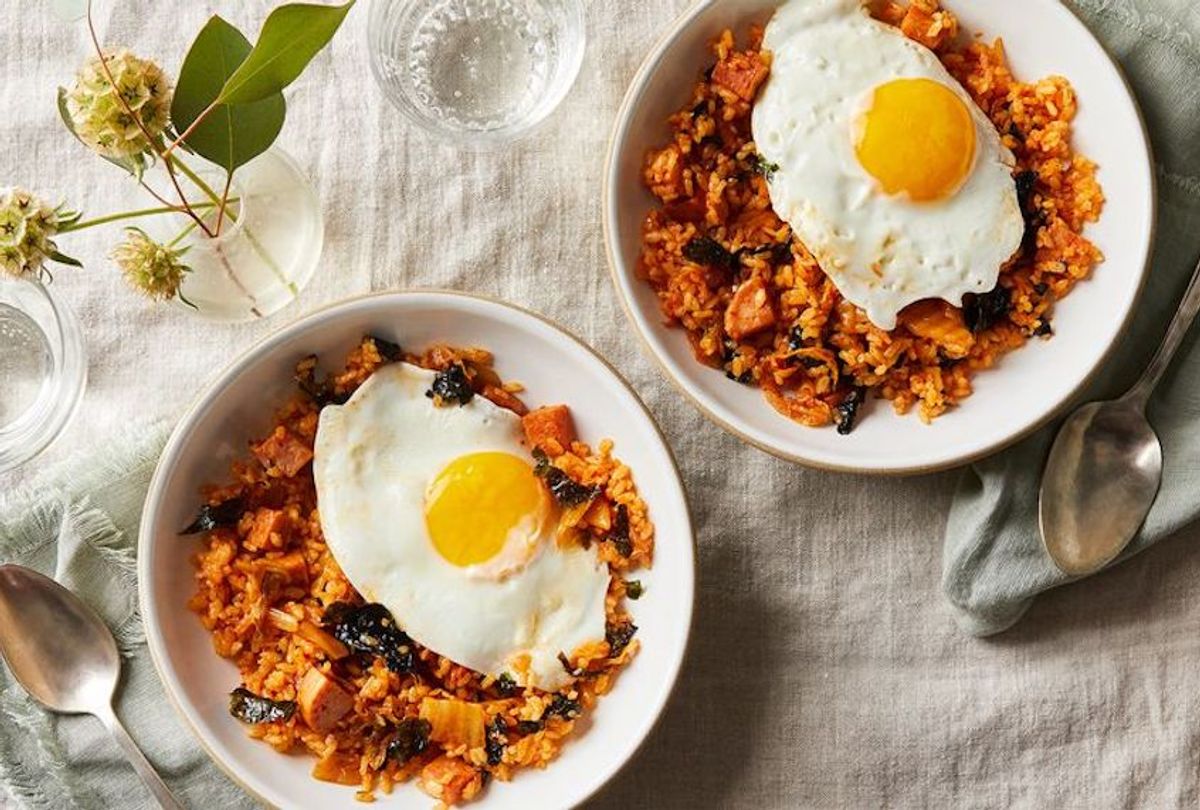 I grew up in a house with a peach tree in the front yard, with neighboring streets, highways, and cities named after peaches. I loved picking the fuzzy pink fruits when they were ripe on the branch, the way they’d taste after long, hot days playing in the creek with the other boys.

My favorite color, even at 4, was pink. My parents let me walk around the house wearing my cousin Becky’s Pink Ranger costume after she was done with it on Halloween. This seems like a minor detail, but it’d inform one particular dinner, 20 years later, when I would come out to them at our favorite sushi restaurant in Atlanta.

Naneun geiya (“I’m gay”). When I practiced that in front of the mirror over and over for a month, I cursed the gods for making the words for coming out in Korean so much longer, so much more assonant than in English. After I said it, as casually as I could over salmon skin rolls and hot sake — and the longest breath I’d ever held — they laughed.

I’ll never forget that laugh, when for one brief moment I thought I was being presumptuous, assuming they didn’t already know. But after they saw that I was serious, their smiles quickly faded. My mom sighed; she looked so tired, the most tired I’d ever seen her. My dad paused, then bawled into his hands in the middle of the crowded restaurant.

To this day, I can’t figure out if that initial laugh was out of nervousness or because they thought I was joking. It’s just one of those details I keep playing back in my head when I think about that night, what must've been one of the worst nights of their lives.

I'd always thought that you're supposed to learn something about yourself when you come out, but I think I learned more about my parents.

I learned that they didn’t know anything about gay people. When we went home that night, we sat around the dining table with a bottle of Cabernet (which turned into two, then three, then four) and talked for hours. They had so many questions for me: How long have you known? Are you still a boy? Does this mean we won’t get grandkids?

Since middle school. Yes, I’m a gay man, not a transgender woman. No, of course not; I love kids.

The initial questions turned into desperate ones of bargaining: Can’t you just become a priest or marry a lesbian? For which I commended their creativity, but declined. There were multiple variations of this: Do you have to get married to a man? Can’t you just be roommates? To which I said: Would you ask that of Kevin? (my older brother, who is straight).

Most coming out stories don’t go this well. Don’t get me wrong—mine wasn’t smooth sailing all the way. But my dad didn’t flip the table over and kick me out of the house. My mom didn’t slap me across the face and call me the F-word. They just cried. A lot. It was as if I had just told them I was terminally ill. In fact, one of the first things my dad said to me that night was, “It feels like my son died.”

What the hell do you say to that?

It was 3 a.m. when my mother stumbled into the kitchen to make us something to eat.Dinner was eight hours ago, and this was time-out. Time-out from all that wine, from their son having just come out, from hours of talking through what it meant that I was gay (that I’d been gay their whole lives), from being a perfect family that had been thrown a curveball.

In times like that, there are few things more comforting than a bowl of Jean's chewy, caramelized kimchi fried rice. Everyone likes to wax nostalgic about how their mom’s this or their mom’s that is the best x, y, and z.

Well, my mom’s kimchi fried rice is the best.

Maybe it's the best because I don't know how to make it. I’ve spent the last decade of my adult life trying to recreate it in my own kitchen to no avail. Bland, watery, zero chew. Once, exasperated, I called her to ask, “Why doesn’t mine ever come out like yours?”

“Kimchi fried rice is only as good as the kimchi it’s made from,” she said. “Are you buying bad grocery-store kimchi?” (I was.)

That night I came out to my parents, it meant something to me that my mother decided to cook kimchi fried rice for us. Maybe because it sopped up the four bottles of wine the three of us had shared. Or because it was a quick, cheap way to use up leftover gonggi bap (the day-old, cold white rice at the bottom of a rice cooker) with this and that from the pantry. Or because it’s my favorite. Because, every time I come home to Georgia there's a vat of it waiting for me on the stove with a firm note, ERIC, EAT — and so I associate it with comfort, which in turn means I associate it with her.

It meant something to me that in the midst of my mother's grave disappointment, during a time in her life when everything had seemed to change, the rug pulled out from under her, somehow she and I could seek refuge in this one thing that would never change. I was still her son and she was still my mom, and kimchi fried rice—something only she could make—was still my favorite thing to eat in the entire world.

My dad and I drunkenly cheered my mother on as she fried the Spam with the kimchi and rice, and crushed in a packet of roasted seaweed snack with her hands.

She turned to us, casually: “Egg?”

In a separate nonstick skillet (the kind with the red dot in the middle), she fried three eggs, left the yolks runny, and placed one atop each crimson, red pepper–flecked plate. I dug my spoon into the egg and let it ooze onto the rice, then stirred it in. That first, velvety bite is always the best, when the yolk has yet to set and everything else is suspended in time.

“You know your mother never makes this for me?” my dad joked through a mouthful of half-chewed rice. “I only ever get to eat kimchi fried rice when you’re in town. Prodigal f—g son!”

I still call Jean every Sunday. She answers with a loud “Joonho-ya!” (my Korean name), scolds me for waiting an entire week to call her. But the difference now is that when I call her, I don’t have to lie about my weekend or hide from her the most important parts of me. She gets to hear the good and the bad, and be a part of my life. She gets to be my mom.

They both get it now, my parents. A few days after that first drunken night, I was sharing a smoke with my dad outside when he started talking about weddings. “Will you get married someday?” he asked.

He put out his cigarette, crushed it with his foot, and hugged me. “OK. I’ll be there.”

Months later, when I came home from the airport, my mom sat with me in the kitchen as I dug into the kimchi fried rice she had just cooked for my prodigal-son arrival. “Do you want me to fry you an egg?”

I shook my head no, smiling. She was holding a cup of coffee with both hands. I could tell she wanted to tell me something.

She told me about a woman in her art class whom she suspected was gay: short hair, divorced, stared at her once while they were painting.

I laughed. “Mom! That doesn’t mean she’s a lesbian.”

“She could be!” she said. She talked about how she sees gay people everywhere now, how she wonders why she never noticed them before. “Some of them are dressed so well.”

Then, my mother started crying. I dropped my spoon and placed a hand on her arm, asked what was wrong.

"When you came out," she said. "I stopped believing in God."

She told me about how angry she was at him for making me gay, asked herself over and over: Why did you give me this? Apparently she and my dad had stopped attending church, one of the only sources of comfort for them in suburban Atlanta since the '80s. They never went to the therapist I had found them, either. They just stayed home and avoided their friends. Until one day, she said, when eventually she realized that I had always been gay, and that she just didn't notice, that she just hadn't been paying close enough attention to me and everything I was going through.

"What kind of mother does that?"

The hardest part of coming out was watching my mom feel inadequate like this, like she had done something wrong. I didn't know how to help her. It broke my heart.

I said before that I'd always thought you're supposed to learn something about yourself when you come out, but that I learned more about my parents.

I also learned that they view the world solely through the lens of their children, that no matter what happens, my brother and I will always be at the center of it. That for the last 30-some years, they've been chipping away slowly at the most ingrained parts of themselves in order to meet us halfway. And that despite how much my being gay went against their religion, their culture, and their belief systems, for my parents, I still came first.

I learned that my dad is a good man who loves his son more than what his country thinks of gay people. That even though he's not one to bend, he bent for me because I'm his son.

I learned that my mom is a quick study, but that she still blames herself for it once in a while — to which I have to keep reminding her that I was gay the second she found out she was having me. For months I reassured her that coming out to her lifted a huge weight off my shoulders, that I suddenly felt happier in my new life, and that telling her was like telling my best friend a secret that had been festering inside me for decades, slowly destroying me.

This led to her talking about her pregnancy, and how the doctor thought I was a girl and how she bought all this pink crap but had to return it when I was born. How with Kevin all she wanted were tomatoes, but with me, she craved Spam. So my dad went out and bought an entire box of it, even though he was a broke undergraduate and worked night shifts as a janitor. Little did they know that years later, their second son's favorite color would be pink, and that they'd be drinking red wine and eating kimchi fried rice with him at three in the morning. And that by the fourth bottle, they'd all be cackling in the kitchen, wondering how, after all those years, they never knew. There were so many signs. "The Pink Ranger was his favorite, for Christ's sake!"