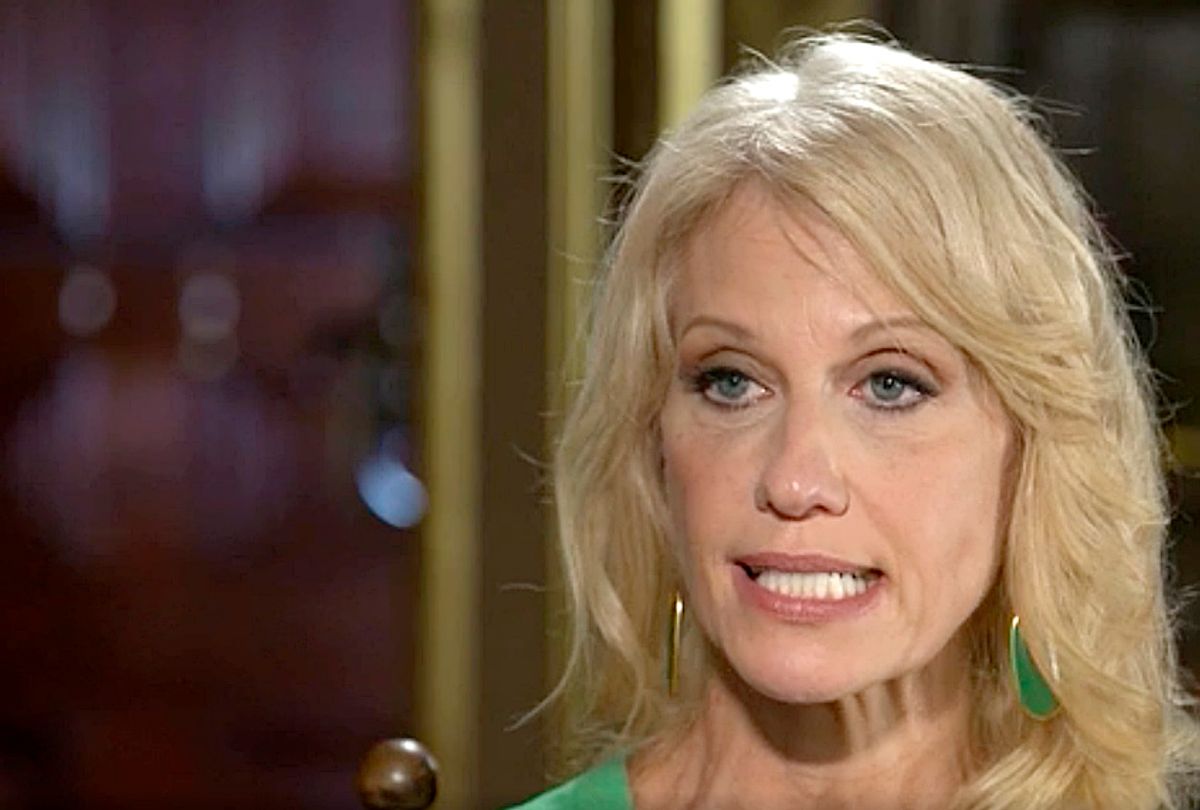 Kellyanne Conway showed some empathy for certain journalists in a new interview with CNN's Christiane Amanpour. The counselor to President Donald Trump said that she does not believe the press is the "enemy of the the people" – the label frequently used by her boss – and conceded on camera that the hostility between the White House and the media is "not healthy" for either side.

But Conway chose her words carefully, and her praise for the journalist interviewing her was packaged along with disparagement for the CNN host's peers. She also absolved the president of any wrongdoing when it came to his administration's tensions with the press.

"I don't think the press, writ large, is the enemy of the people," Conway told Amanpour. "I do find the press – often in their coverage of this White House, and this administration and this president – to be the enemy of the relevant." She then alleged that major publications are not covering important issues daily that Americans care about, like the economy, education, health care or foreign policy, and instead focusing on "palace intrigue" and "personnel" over "principles and policies."

It is important to note that Conway's response came after Amanpour questioned her about the danger and potential consequences of Trump's rhetoric about the press. As Amanpour appeared openly perplexed at Conway's dodge of her question, Conway added: "If certain reporters feel that way, why do they go on late-night TV? Why do they have agents they pay a percentage to? Why do they write books? Why do they give speeches for tons of money? Probably two speeches, [would add up to what] we'd all make in the White House in a year."

However, Amanpour did not let Conway off the hook. "There are also all sorts of despicable and undemocratic leaders all over the world who are taking seriously" Trump's attacks on the press as "permission to demonize their own press – not to mention us," CNN's chief international correspondant challenged. "It has gotten worse in the last few months, and people are using the 'fake news' slogan to justify the unprecedented amount of imprisonment and violence directed towards journalists around the world."

Conway, the woman who coined the term "alternative facts" as an excuse for White House falsehoods, again deflected. "I see things every single day that are just not true," she said of the media. "I truly feel for your generation and your elevation of journalist, because the media writ large now does not include a lot of Christiane Amanpour's. It includes a lot of people who call themselves journalists, because they sit on Twitter all day."

Amanpour reminded Conway that Trump takes aim at reputable news organizations like her own CNN and the New York Times – not just the "Twitteratti."

"I do agree that it's not healthy for the body politic on either side," Conway finally conceded about the current dynamic between the White House and the press. "Someone like I – and others have tried, the president has tried — to turn down the temperature, to give more access. He just gave a few major interviews to print outlets. He gives interviews on television."

Conway then returned to her normal tune of condemning what she perceives as the press' inaccuracy, offering examples of instances where the media had failed to give the Trump administration credit.