Wil Wheaton, lifelong fan of PBS and libraries, has one book he can't recommend 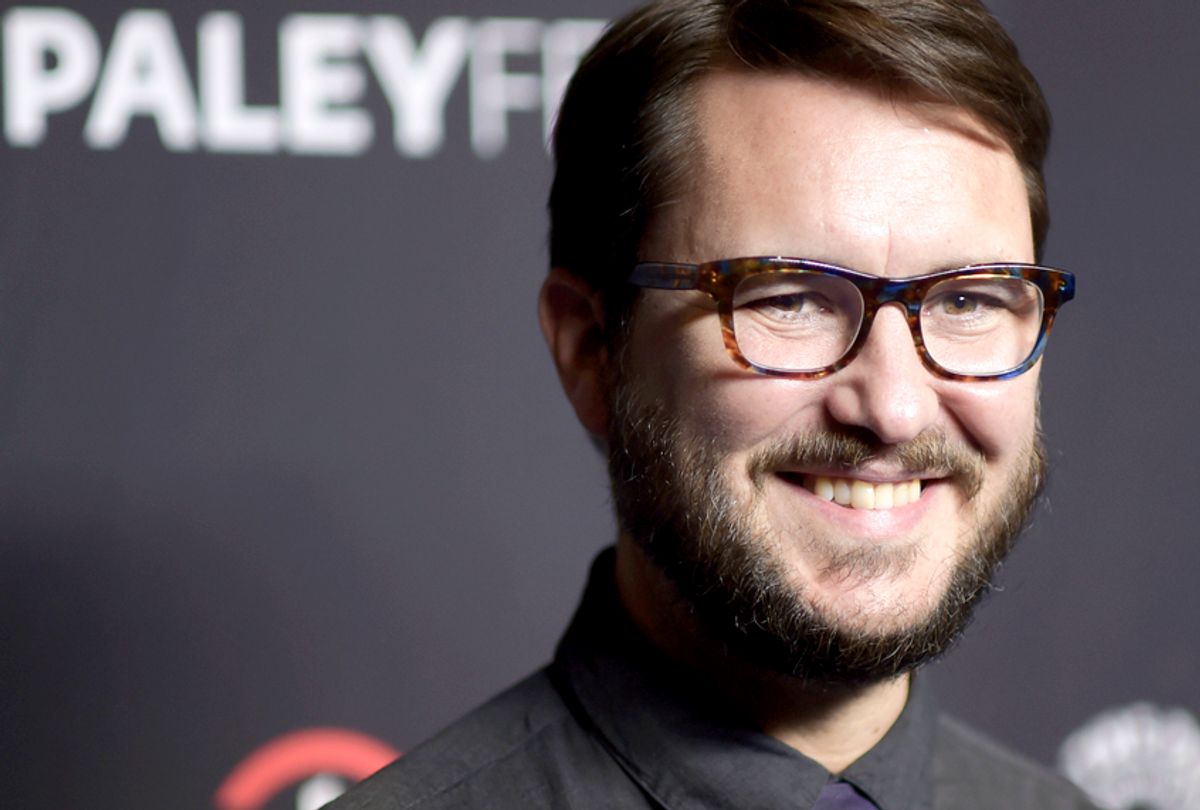 Wil Wheaton, a favorite guest star on “The Big Bang Theory,” owes his geek hero status to his local librarian. And his initials.

In third grade, as best as he can recall, “We would go to the public library once a month from school, and . . . they would lay out books on a table. Each of us was allowed to take a book. And the teacher decided that the way to fairly distribute these books among kids was to go alphabetically by your last name one month, and alphabetically by your first name the next month. So I was always going last, no matter what.

So the librarian said she’d help him find a book. What do you like to watch on TV? she asked. Wheaton listed his favorite shows: “Doctor Who.” “The Twilight Zone.” The Outer Limits.”

“She said, ‘that's called science fiction,” he recalled, and handed him a copy of  “Z for Zachariah” by Robert C. O'Brien.

“From there,” he continued, “it was ‘The Foundation’ trilogy, and ‘Tales of Known Space,’ and like, I can't even remember all of the ones that I read. But it was because of a public library that I had access to that, and a librarian was able to take what I liked from TV and help me find the books that shaped who I am as an adult. Because I had relatively easy access to ‘The Outer Limits’ and ‘The Twilight Zone’ and ‘Doctor Who’ and ‘Star Trek’ and a librarian.”

This is not the reason PBS recruited the actor to be one of the celebrities featured on “The Great American Read,” returning as an eight-part series on Tuesday at 8 p.m. and hosted by Meredith Vieira. But it helps.

Wheaton appeared in the May kick-off special to talk about one of his favorite books, “Dune.” But he’s also a fan of “Heart of Darkness,” his second selection.

“I could have chosen ‘The Stand’ as well, which I think is amazing,” he told Salon in an interview conducted recently in Los Angeles. But he didn’t, he said, “because I am so heavily identified with science fiction because of the time I worked on ‘Star Trek,’ and I'm linked to Stephen King for the rest of my life because of ‘Stand By Me.’ I kind of wanted something where when we talked about it, we wouldn't talk about me. We would talk about the book.”

He’s also one of a group of celebrities, including Neil deGrasse Tyson (who stumped for “Gulliver’s Travels”), Allison Williams (“Frankenstein”) and Venus Williams (“The Chronicles of Narnia”)  lending their voices to PBS’ crowdsourced search for America’s “best-loved novel.” The contest launched  with the reveal of the 100 novels contending for the title, selected by public vote. Additional polling has winnowed the choices down to the top 40.

The original list is wide-ranging, to say the least. “Fifty Shades of Grey” sits in the same ranks as “A Confederacy of Dunces.” The “Outlander” series holds a slot, as do “The Handmaid’s Tale” and the “Twilight” saga. This may trigger a touch of literary snobbery but the bigger and optimistic message is, Americans are still passionate about reading.

In the minds of many people Wheaton will always be associated with Wesley Crusher from “Star Trek: The Next Generation” or, more recently, the on-and-off nemesis of “Big Bang Theory” ultra-nerd Sheldon Cooper.

Wheaton also blogs, hosts a web series on Geek & Sundry that highlights celebrities playing board games known as “TableTop,” and caused a stir by recently quitting Twitter, where he commanded a substantial following. When we sat down with him in Los Angeles, however, he had yet to do that, or to find out, along with the rest of America, that the upcoming 12th season of  “The Big Bang Theory” would be its last.

Discussing the list with Salon was more than sufficient to ignite his passion, especially when he shared his thoughts on his least favorite book to make the top 100.

When you saw the list of America’s 100 most-loved books, what was your first impression?

My first impression was, yeah, this makes sense. I think it is amazing that this list of books has everything from “Siddhartha” to “Fifty Shades of Grey.”. . . The only book on the list that surprises me is “A Separate Peace,” because I hate that book. I viscerally hate that book. I had to read it in school. I thought it was terrible. I don't care about two prep school white kids, and their bullshit prep school troubles.

Then I thought, “Maybe it's me. Maybe there's something wrong with me that I don't like that book.’ But literally everyone I know had to read it. And I've never heard anyone say anything like, “I can't wait to read that!” It's always been, “Oh my god I had to read that freshman year and it's awful.” So I was very, very surprised about that.

But I was thrilled to see “Harry Potter” and “The Martian” and “The Adventures of Tom Sawyer,” and “Ready Player One.”  I was thrilled to see books that were written by people I know on the list. And I'm glad I didn't have to participate in the creation of the list, because anytime you put together a list, something's going to get left off, someone's going to be bummed out.

The reason I asked that question is because of my own admitted snobbish reaction. When I looked at it, I was kind of like, “Seriously, that made the list? ‘Fifty Shades of Grey’?” Then I processed it for a little while, and I realized — and I don’t mean this to sound elitist, I truly don’t mean it to be — but  we should be glad people are still passionate about literature.

So when you look at it, what does the list tell you about our thoughts on literature and the way we value literature in these times?

People choose books that matter to them for one reason or another. There's a Dean Koontz book on the list that I loved when I was like 13. I was already a really voracious reader, but if I hadn't been, if that was the book that got me into the library — and got me into a place where I could find other people who liked to read, and got me in the same room with a librarian who could say, ‘Oh if you're reading that, maybe you'll like this!’ — I think that's great.

I think maybe the way to look at this list is it's not the 100 best books. It's 100 books that have really mattered to a lot of people for one reason or another. And let's share that, let's enjoy that common shared experience of reading these stories and experiencing these stories together.

A lot of people are fond of saying that television is the new literature. Do you think that may be a misperception, given how we value books and literature?

I do. I think that as long as books have existed, there has been a person to complain that not enough people are reading. And I think that'll go on forever. There's a great picture of a train car in 1920 or whatever, and everyone's got their face in a newspaper. And someone's complaining about how no one talks on the train anymore. I'm like, ‘God, talking on the train sounds terrible. Putting my face into a paper sounds great.’

I don't believe the idea that people just aren't reading anymore. But I'm really worried about the health of our public libraries, because we seem to have decided as a nation that what we need to do is give more money to corporations and the rich, and take it away from vulnerable populations that don't have access. I worry that we're losing our bookstores, because we're just going online to buy things now.

That speaks to our economic split as well.

It absolutely does. The economic divide, and the opportunity divide is so bad right now. One of the reasons I love being part of the show is that it is on public broadcasting. I believe in PBS. I was a PBS kid.

When  I grew up my family couldn't afford cable. My parents were just like, "Watch something that's good for you." So I grew up watching intelligent, challenging programing that would never have a chance on one of the three broadcast networks that were on back in the '80s when I was a kid. So I think it's really, really important that everyone who wants to read a book has access to those books.

And now, the obligatory question about “The Big Bang Theory.” Are you going be in the upcoming season?

I don't know until like two weeks before we shoot. If they ask me, I will say yes. It is my greatest hope that I'm going get to do some more Professor Proton episodes, because that was really fun.

My pitch to the writers is that Sheldon becomes the science advisor for the Professor Proton show, and drives Wil Wheaton crazy. [Note: Since this interview took place, Bob Newhart was confirmed to make a guest appearance in the finale season. Odds are Wheaton will be back as well.]

I think that “Big Bang” is one of those shows that could be credited for making a lot of references that invite people to explore a little bit more, not just the movies and the comic books they refer to, but to explore the literary references.

All the time, yeah.

Do you think it's possible now that people see it as kind of a gateway to literature? I ask that with the knowledge that many people will say, “Oh, I don't know anything about this reference, let me look on Wikipedia and see what it is” instead of actually kind of diving into the source material?  Do you see the show as kind of a viable cultural gateway for people?

Sure. I mean, there's always going to be someone who's really happy to just go dip their feet in at Wikipedia, and that's fine. Then there's someone like me that wants to know absolutely everything, and wants to go to the library and to the bookstore and also to Wikipedia, and also wants to get the Spark Notes and the Cliff Notes, wants to look up and find out if there's an online course where people can discuss this literature. That’s true of anything that inspires people to dig a little deeper. What did we used to call it? . . . Self-guided learning or something like that.

And there's a peer gateway element to that too.

One of the reasons I picked “Dune” is that it works on both of those levels. All science fiction — good science fiction — when it is really doing what it does best, it allows us to question our presuppositions, it allows us to look critically at our world that we're living in, without feeling like we're in a lecture. It can also just be fun storytelling. It can also just be, you know an interesting delightful escapism.

Obviously I'm pulling for “Dune” and “Heart of Darkness” because I chose them. I'm pulling for “The Martian” and for “Ready Player One” because I'm friends with the writers. But honestly, I just hope “A Separate Peace” doesn't win.

Wheaton got his wish: John Knowles’ classic, and the bane of countless high school students, failed to crack the top 40.

How Jerry O’Connell landed "Stand By Me"