How the wealthy use frivolous lawsuits to silence activists, journalists and even victims of sexual violence 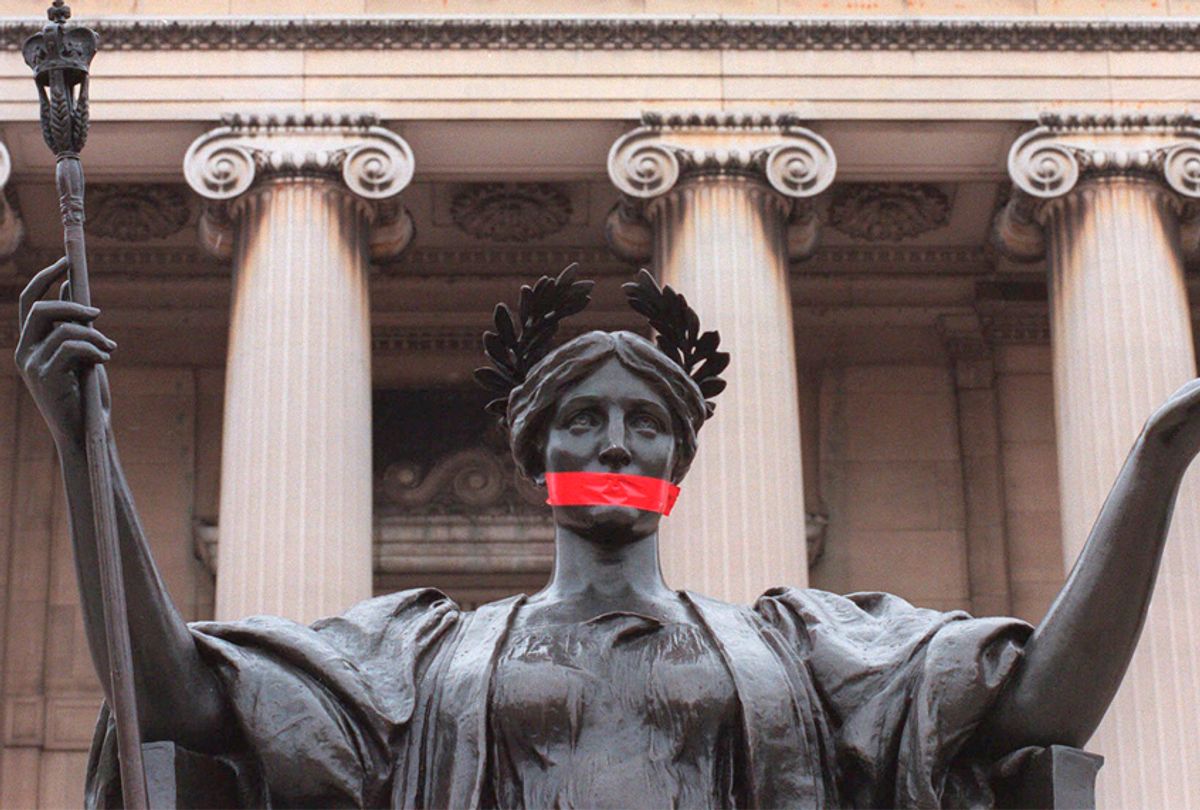 It's a sign of the idiocy of Donald Trump-era politics that hundreds of thousands of words have been spent pushing what amounts to a hoax about "campus censorship," while genuine assaults on free speech -- especially by Trump himself, just don't attract the same amount of attention. But while the New York Times prefers to lavish attention on conservatives whose feelings are easily bruised, there are activists fighting genuine threats to free speech and pushing back against censorship that's far more serious than having someone scold you that racist thing you said.

Last week, a coalition of mostly left-leaning organizations — including the ACLU, Greenpeace and Human Rights Watch — joined under the banner Protect the Protest to speak out against an increasingly worrisome tactic that wealthy private interests use to squelch free speech: SLAPP suits. "SLAPP" is short for "strategic lawsuits against public participation." While there are many variations, most SLAPP actions use defamation lawsuits — or even just the threat of them — to scare journalists, activists and even private citizens from speaking out against injustice. While these lawsuits are rarely on solid legal grounds, they are nonetheless highly effective at the goal of keeping critics silent.

The typical SLAPP suit, as Sen. Sheldon Whitehouse, D-R.I., explained last week on a press call, is filed by a wealthy corporation or individual and aimed at a smaller organization or less wealthy person. The wealthy party's suit is "designed primarily to outlast and outspend" those who are speaking out, Whitehouse said, "to go at their funding, to make them burn their resources in litigation."

The wealthier party, he added, "can basically win a breath-holding contest fighting in the courts."

No doubt the most famous of these cases was the 2016 lawsuit by former pro wrestler Hulk Hogan against the website Gawker, alleging that the site had invaded his privacy by publishing a leaked sex tape in which he allegedly appeared. While Hogan arguably had a sympathetic case on human grounds, it soon emerged that his lawsuit was the result of a multi-year SLAPP campaign waged by Silicon Valley billionaire Peter Thiel, who was bitter that Gawker had published unflattering articles about him in the past. Thiel's efforts led to a case that was winnable — he appeared determined to destroy Gawker — but much of the time SLAPP plaintiffs aren't really interested in the legal soundness of their cases.

"In almost all these cases, these lawsuits were never going to win," explained Trevor Timm, executive director of the Freedom of the Press Foundation. "But the problem is these powerful people and corporations don’t actually care about winning. They care about inflicting damage."

What free speech activists want is laws making it harder to sue someone for defamation without just cause. It gives the person who is being sued a chance to file a special motion for dismissal before the case can really get underway. That could help stop frivolous lawsuits before the defendant has spent too much money and could also, in many cases, discourage litigious, censorious people from bothering to sue in the first place.

The Public Participation Project has a map of the state laws protecting free speech from frivolous lawsuits, but what activists really want is a federal law. As Jeremy Rosen of the Public Participation Project argued in The Hill in 2016, "not all of the existing laws provide sufficient protection, and SLAPP plaintiffs have the ability to 'forum shop' for a state without adequate free speech protections in which to file their lawsuit," which means "legal fees from SLAPP suits can bankrupt individuals simply for exercising their First Amendment rights."

Typically, the discourse around SLAPP policy is focused on journalists and activists, who are often intimidated out of raising public awareness with lawsuits or even just the threat of lawsuit. But there's another group of people who need protection: Survivors who wish to speak out about their experiences.

“In light of the MeToo movement, when more and more women are speaking, we need to protect their rights to tell their stories," Bridget Mahoney, a former Youngstown, Ohio, news anchor who has become an advocate for survivors of domestic violence, told Salon.

Mahoney has been outspoken about her previous marriage, which she says was abusive, and her extensive and costly efforts to get out of it. After all that, she and her daughter, Julie Boak, helped join a campaign to pass the Tina Croucher Act, an Ohio law mandating that public schools make education and resources related to "dating violence" available to students. As part of their activism, they testified in front of the Ohio state legislature and, Mahoney said, her ex-husband sued both her and their daughter for defamation based on what they shared in the testimony.

“I simply ran out of money," Mahoney said. "It created a whole level of additional trauma. We had progressed so far in healing our wounds from the past, and this just added new ones.”

Mahoney's experience is all too common. As Tyler Kingkade of Buzzfeed reported in 2017, defamation lawsuits are "a new tool in the battle over Title IX enforcement and are proving to be serious obstacles to students filing sexual misconduct complaints."

"Sometimes the mere threat of a defamation suit is enough to deter a student from going ahead with a sexual assault claim," Kingkade wrote.

Mahoney said that after she does speaking events, "women come up to me and say they’re afraid to even speak publicly, for fear of getting sued."

These lawsuits don't just affect women speaking in public, to be clear. In many cases, they are triggered simply by a woman filing a complaint with police or with an educational institution. Anti-SLAPP legislation has already been used successfully to get defamation lawsuits dismissed that were filed in response to the victim doing nothing more than calling the police.

In defense of free speech, the Protect the Protest coalition held events early last week in multiple cities, in which activists picketed the front doors of some of the most SLAPP-friendly law firms in the country. With so much chatter in the press about "free speech," the hope is that attention can be diverted away from right-wing hoaxes and scare tactics and towards this genuine, systematic threat to free speech.

"There is no such thing as progress without protest," May Boeve, executive director of the environmental group 350.org, said in a statement. "Our climate and communities depend upon people making their voices heard."