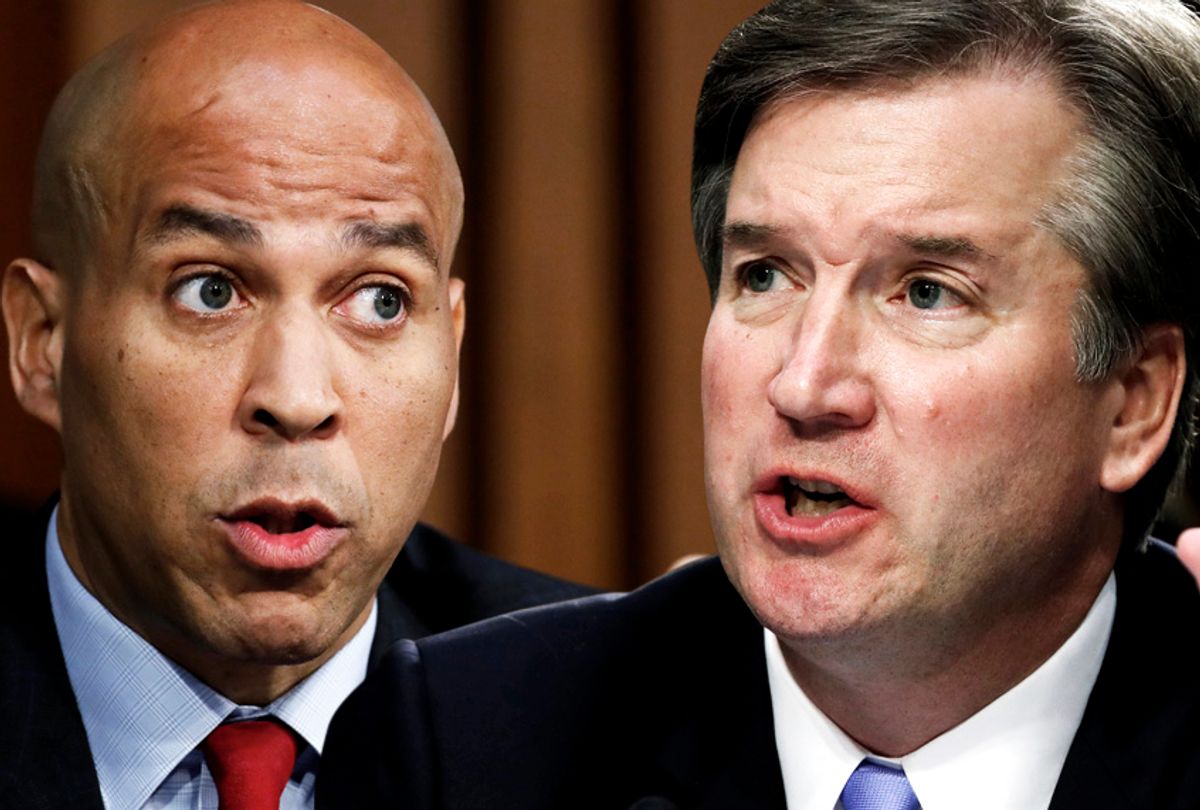 As President Donald Trump's Supreme Court nominee Brett Kavanaugh continues to inch his way closer and closer to a seemingly inevitable confirmation, a prevailing concern remains the lack of specifics regarding his judicial and personal background regarding key issues.

The perception has been that Senate Republicans, eager to push through a Supreme Court nomination before they risk losing control of the upper chamber of Congress in this fall's midterm elections, have been rushing through the process in spite of the fact that important questions have not yet been answered by Kavanaugh.

This brings us to the two latest developments in the Kavanaugh nomination — the actions of Sen. Cory Booker (D-N.J.), and Kavanaugh's long-winded non-answers to a list of questions presented to him by the senators.

On Wednesday night, Booker released 28 documents that had not previously been seen by the American public regarding Kavanaugh's time working for the White House counsel's office under President George W. Bush, according to the Associated Press. The documents reveal that Kavanaugh played a large role in pushing through some of Bush's judicial picks during that period, including some very controversial conservative judges.

Booker pointed to these documents as evidence that Kavanaugh may have been less than forthright in his testimony when he downplayed his roles in those selections, arguing that the documents "raise more serious and concerning questions" about the judge's behavior.

Booker's actions drew a scathing condemnation from the conservative group Judicial Watch, whose president Tom Fitton sent a letter Wednesday to the Senate Ethics Committee insisting that Booker be investigated for publicly disclosing confidential documents. The letter claimed that Booker had "explicitly invited his expulsion from the Senate in his egregious violation of the rules and contempt for the rule of law and the Constitution."

As the Associated Press reported:

The committee was hoping to quickly process Kavanaugh's unusually long paper trail and relied on Bush's lawyer, Bill Burck, to compile the documents, first estimated to be 900,000 pages from Kavanaugh's time in the counsel's office. Eventually, some 267,000 pages were made public and 174,000 were held as committee confidential.

The logic behind Booker's decision to release these confidential documents becomes more clear when you look at Kavanaugh's written responses to senators' questions Wednesday night. On matters ranging from his views on LGBTQ rights and sexual misconduct accusations against a judge with whom he worked, Kavanaugh offered evasive responses to how he would rule on a number of key issues that might come before the court.

The one area where he did offer specifics involved financial questions, with many observers drawing attention to how Kavanaugh carried between $60,000 and $200,000 in credit card debt in 2016 but became debt free except for his mortgage as of last year. Kavanaugh had this to say about that:

Our annual income and financial worth substantially increased in the last few years as a result of a significant annual salary increase for federal judges; a substantial back pay award in the wake of class litigation over pay for the Federal Judiciary; and my wife’s return to the paid workforce following the many years that she took off from paid work in order to stay with and care for our daughters. The back pay award was excluded from disclosure on my previous financial disclosure report based on the Filing Instructions for Judicial Officers and Employees, which excludes income from the Federal Government. We have not received financial gifts other than from our family which are excluded from disclosure in judicial financial disclosure reports. Nor have we received other kinds of gifts from anyone outside of our family, apart from ordinary non-reportable gifts related to, for example, birthdays, Christmas, or personal hospitality. On the 2018 financial disclosure report, I correctly listed “exempt” for gifts and reimbursements because those are the explicit instructions in the 2018 Filing Instructions for Judicial Officers and Employees.

When Sen. Sheldon Whitehouse (D-R.I.) spoke to Salon Wednesday about these issues, he said that "the American people should feel confident that whomever the president appoints to the Supreme Court would come to the bench without financial obligations that could affect their independence."