The "Just Do It" ad prompted boycotts, but it seems the outrage did little to curtail the company's stock 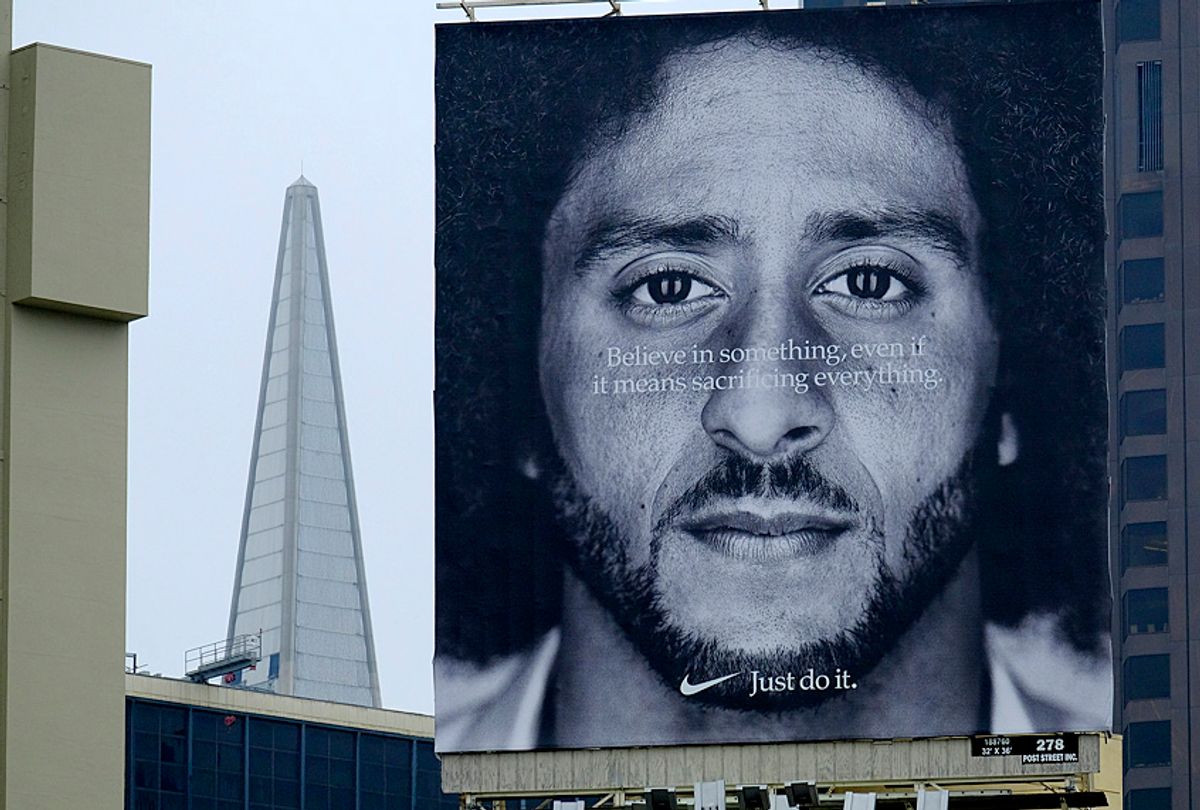 Nike's decision to tap ousted NFL quarterback and activist Colin Kaepernick for the company's 30th anniversary "Just Do It" campaign, resulted in promised boycotts of the brand and consumers burning their Nike shoes or cutting off the Nike logo in viral photos and videos on social media. It was the latest iteration in the ongoing debates over NFL players kneeling during the national anthem to protest racial injustice, a tactic Kaepernick started two years ago and was allegedly blackballed from the NFL because of it.

"Believe in something. Even if it means sacrificing everything," the ad read, with the words printed across a close up of Kaepernick's face.

However, despite all the backlash, on Thursday, Nike's stock closed at an all-time high of $83.47.

"The whole Kaepernick situation was unique," footwear and apparel analyst, Christopher Svezia for the financial firm Wedbush, tells Salon. "It was controversial, but I think at the end of the day, for their core consumer, it probably drove strength."

Controversial, it was. The day after the ad went live, Nike shares suffered a three percent dip and #NikeBoycott was trending on Twitter, according to CNN Money. President Donald Trump, who has consistently disparaged NFL players for protesting, tweeted: "Nike is getting absolutely killed with anger and boycotts."

Two days later, he addressed Nike again: "What was Nike thinking?" he asked.

And the mayor of Kenner, Louisiana attempted to ban Nike products from the New Orleans suburb. "Under no circumstances will any Nike product or any product with the Nike logo be purchased for use or delivery at any City of Kenner Recreation Facility," a leaked memorandum, which was reportedly signed by mayor Mayor Ben Zahn III said. He eventually rescinded the order.

Svezia said the ruling is still out on whether or not the Kaepernick ad will translate into sales, "but I think their core consumer embraced what they did," he said. The analyst added that when you think about Nike's core customer, who he described as predominantly men of color or wealthy women, "they are probably a little bit more aligned with the messaging that Nike was bringing with that ad and therefore was incremental positive," he said.

While social media was the venue many conservatives carved out to wage their boycott and express their outrage, "If you also look on Instagram and look at the net follower ads during the period the campaign ran, they accelerated significantly," Svezia said. "So I think that clearly indicates more of a positive than a negative."

LeBron James celebrated Nike's history-making stock on Twitter and poked fun at those who burned their Nike gear for the sake of a boycott.

As James alluded to and Thursday's news confirms, Nike stocks are on fire, and one study conducted by Edison Trends determined that Nike's online sales are too. Nike first ran its Kaepernick ad on a Monday and Edison Trends said that the companies sales surged 31 percent from Sunday through Tuesday of that same week.

"There was speculation that the Nike/Kaepernick campaign would lead to a drop in sales, but our data over the last week does not support that theory," Edison Trends co-founder Hetal Pandya said in a statement.

Given Nike's stock success and what Edison Trends found about the brand's online sales, there is evidence that more people reacted positively to the Kaepernick ad than not. But Svezia added, that at the end of the day, Nike's financial achievements will always be tied to their product and so "The reason why Nike is where it is," Svezia said, is because "their product is resonating."