Supposed genius Steve Bannon thinks he can lure progressives into the nationalist right. Sanders says no thanks 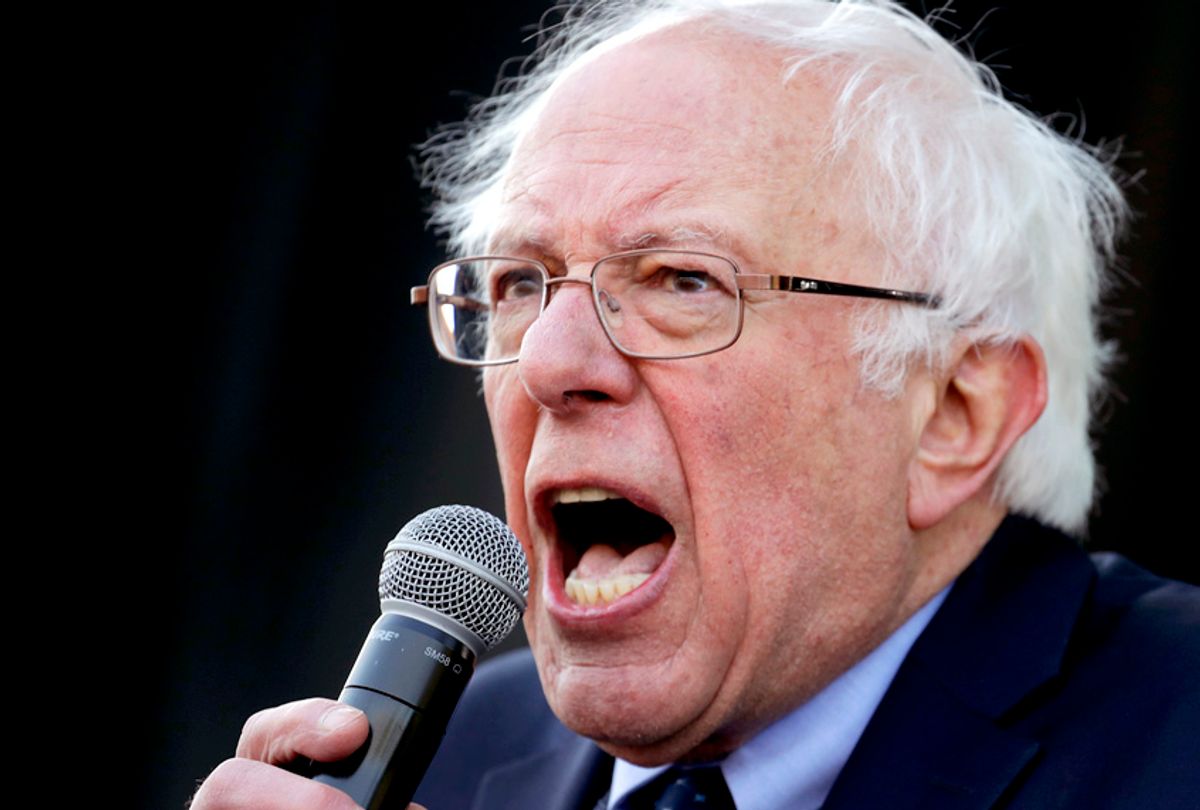 I wrote earlier in the week about Steve Bannon's ties to far-right politicians in Europe. In fact, Bannon is in Italy right now schmoozing with his newest political ally, Matteo Salvini, who's the interior minister and leads the country's nationalist, anti-immigrant party. The New York Times describes Salvini as "the most powerful figure in Italy’s new populist government." He's an emerging far-right superstar known for his puckish habit of owning the libs by quoting Benito Mussolini.

According to the Times, Salvini has signed on to Bannon's new so-called organization, "The Movement" in order to "help bring about a continent-wide populist takeover during European Parliamentary elections next spring." Bannon will offer a meeting space and supposed expertise in various aspects of campaigning for far-right populist leaders. (Apparently, his three months of experience working for Donald Trump in the flukiest presidential election in U.S. history qualifies him as a political guru.)

Salvini has other things in common with Trump and the Republicans besides Steve Bannon. He and his party are being investigated by government prosecutors for allegedly stealing tens of millions of euros. (Funny how all these "populists" are always stealing money with both hands.) Just to make things even more interesting, Buzzfeed report that Salvini's close aide, Gianluca Savoini, "has links to mercenaries fighting alongside pro-Russian and neo-Nazi militias in Ukraine." Savoini himself is the leader of a pro-Russia "cultural organization" which Buzzfeed's research showed has disseminated pro-Kremlin propaganda. He has been pushing hard to remove Italian sanctions against Russia. What a small world.

Evidently, Salvini has recently met with Hungary's nationalist anti-immigrant prime minister Viktor Orbán, who is also interested in joining up with Bannon's new movement. Banding together to defeat liberals across the continent is a curious form of nationalism but that seems to be the plan.

Zack Beauchamp of Vox got a first-hand look at this new movement when he went to Hungary to check out the Orbán government. His report is chilling. He describes an authoritarian state with border fences, byzantine bureaucracy designed to thwart democratic governance, a stifled press overwhelmed with government propaganda and a kleptocratic economy. He dubs it "soft fascism," which sounds better than it actually is:

[A] political system that aims to stamp out dissent and seize control of every major aspect of a country’s political and social life, without needing to resort to “hard” measures like banning elections and building up a police state.

He observes how this provides a model for the U.S., not by dramatically imposing dictatorial rule but rather through "a series of changes to electoral rules and laws imposed over time that might individually be defensible but in combination with corruption and demagogic populism creates a new system — one that appears democratic but functionally is not."

Bannon has said that Orbán, who has been in office since 2010, was “Trump before Trump.”

Bannon thinks he's smarter than everybody else and often tries to co-opt the populist left into his warped vision. He told CNN's Fareed Zakaria last June that he believes he can peel off at least 25 percent of Bernie Sanders' followers to form a nationalist governing majority. Just last week, he warned progressives that the establishment would obstruct their agenda if a Democrat won the White House, just as he believes it is staging a "coup" against Donald Trump.

I suspect many members of the American left have been looking for their leaders to speak out on this.  On Thursday, Sen. Bernie Sanders came through with a searing op-ed in the Guardian condemning this far-right movement and calling it out for the serious threat it is. He calls it "a global struggle taking place of enormous consequence. Nothing less than the future of the planet – economically, socially and environmentally – is at stake ... we are seeing the rise of a new authoritarian axis."

Sanders didn't use the term "axis" by accident. He writes:

While these regimes may differ in some respects, they share key attributes: hostility toward democratic norms, antagonism toward a free press, intolerance toward ethnic and religious minorities, and a belief that government should benefit their own selfish financial interests. ... This trend certainly did not begin with Trump, but there’s no question that authoritarian leaders around the world have drawn inspiration from the fact that the leader of the world’s oldest and most powerful democracy seems to delight in shattering democratic norms.

It is extremely important that one of the most important leaders of the American left puts this is such stark and evocative terms.  He calls out the corrupt, authoritarian leadership of Russia, Saudi Arabia, Hungary, China and more and makes the connections among them clear, calling them part of a  "common front" sharing tactics and even some of the same mega-rich funders.

Sanders doesn't offer specific policies to combat this threat, beyond his social-democratic economic agenda and standard non-interventionist philosophy but that's not the important part. He is issuing a wake-up call to the American left:

In order to effectively combat the rise of the international authoritarian axis, we need an international progressive movement that mobilizes behind a vision of shared prosperity, security and dignity for all people, and that addresses the massive global inequality that exists, not only in wealth but in political power.

Such a movement must be willing to think creatively and boldly about the world that we would like to see. While the authoritarian axis is committed to tearing down a post-second world war global order that they see as limiting their access to power and wealth, it is not enough for us to simply defend that order as it exists now.

We must look honestly at how that order has failed to deliver on many of its promises, and how authoritarians have adeptly exploited those failures in order to build support for their agenda. We must take the opportunity to reconceptualize a genuinely progressive global order based on human solidarity, an order that recognizes that every person on this planet shares a common humanity, that we all want our children to grow up healthy, to have a good education, have decent jobs, drink clean water, breathe clean air and live in peace.

Neither the American left nor the international left is buying into Bannon and company's cramped, ugly, Hobbesian worldview and it never will. The right-wing racists and nationalists are on their own.

How Democrats can shut down Trump's fascism