Here's why the allegation against Kavanaugh is credible: He's smeared and attacked women before 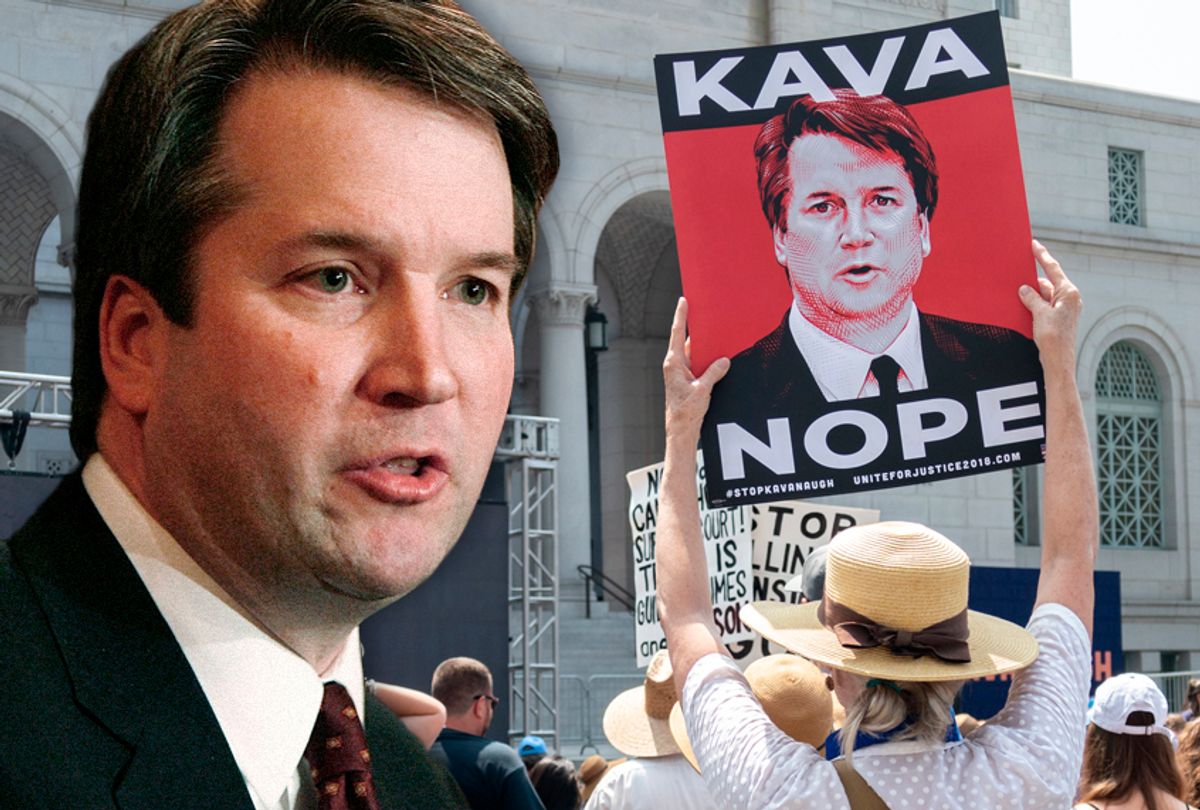 "[Brett Kavanaugh] is not just a conservative jurist. He's not John Roberts. He's not even Neil Gorsuch. He's a Republican operative who is posing as a judge" -- Sen. Brian Schatz, D-Hawaii, on Pod Save America

After the news broke on Friday about an anonymous, decades-old accusation of sexual assault against Supreme Court nominee Brett Kavanaugh, Salon's Amanda Marcotte expressed little surprise at the possibility it might have happened. As she pointed out, despite all the treacly paeans to Kavanaugh the kindly "basketball dad," his jurisprudence as a federal judge was enough to show his hostility to women's rights. It wasn't much of a stretch to imagine that he might have acted upon such impulses at some point in his life.

After all, the president who nominated Kavanaugh for the high court has bragged about assaulting women and more than a dozen have come forward to say that he wasn't idly boasting when he said that. During his confirmation hearings before the Senate Judiciary Committee, Kavanaugh seemed to be as unconcerned with those allegations as the rest of his party.

Over the weekend, Republicans circled the wagons. The anonymous accuser had named a conservative writer named Mark Judge as Kavanaugh's teenage accomplice in the assault. Judge came forward to say that he had "no recollection" of such an event saying, "It’s just absolutely nuts. I never saw Brett act that way.” That might be true, since Judge has written extensively about the wild, debauched atmosphere at the all-male prep school he and Kavanaugh attended in suburban Maryland, and admits to having been a blackout drunk during that period.

That doesn't exactly help Kavanaugh's case. Neither does it help that Kavanaugh later joined a notoriously dissipated and drunken fraternity at Yale and belonged to an equally licentious secret society that even today remains one of the few all-male groups on campus. None of that is evidence that Kavanaugh assaulted anyone, to be sure. But it does call into question the Boy Scout image his sponsors so assiduously created during his confirmation hearings.

On Sunday, the woman who had lodged the complaint came forward to tell her story. She is a professor of psychology at Palo Alto University named Christine Blasey Ford, and she told the Washington Post that she was the author of the letter detailing the alleged sexual assault by Kavanaugh and Judge in the 1980s, when all three were high school students. It's a harrowing story, which Ford's therapist had documented in her files years ago. Ford says she was reluctant to come forward because she knew that it would make her life unbearable. She's undoubtedly right. Kavanaugh's defenders are going to come after her with everything they have.

The Republicans are already shrieking about the Democrats playing dirty pool, which is as ironic as it gets. It was Republicans who threw away the rule book to hold a Supreme Court seat open for nearly a year so they could appoint a hard-right conservative. They are making the case that this "unprovable" accusation is unfair because, as one Townhall writer expressed on Twitter, "I don’t know how it would be remotely just to derail the nomination of someone who’s spent an adult lifetime building a personal & professional reputation based on this exceptionally thin standard."

Perhaps that's true, but it doesn't get Kavanaugh off the hook. In fact, it should make everyone go back and take a closer look at Kavanaugh's personal and professional reputation. When it comes to unfairness and character assassination, he's an expert.

Here is just one example to illustrate the depth of his character deficiencies. Back in the 1990s, conservative activists went to DefCon One when Bill Clinton came into office. A whole group of young conservative lawyers joined the cause, Kavanaugh among them. His first big job for the movement was as Ken Starr's point man on the Vince Foster case.

Indeed, it was Kavanaugh who pushed for the investigation even though Foster's death had been amply covered by congressional committees, the local police, the FBI and the first special counsel Robert Fisk, all of whom had concluded found that the former deputy White House counsel had committed suicide. But Kavanaugh was deep in the right-wing fever swamp and argued to Starr that they could unscrupulously use the fact that there were unfounded conspiracy theories surrounding Foster's death to reopen the case, despite the grieving family's desperate pleas for the government to stop the "outrageous innuendo and speculation for political ends."

Kavanaugh was apparently particularly interested in Rush Limbaugh's odious suggestion to his legions of listeners that Foster had been murdered in an apartment secretly owned by Hillary Clinton. He spent three years and $2 million attempting to dig up dirt on the dead man, at one point demanding that Foster's teenage daughter give the authorities specimens of her hair -- an apparent attempt to prove or imply that a hair found on Foster's jacket had belonged to Hillary Clinton.

Kavanaugh asked everyone involved about this nonexistent affair between Clinton and Foster -- even, eventually, Clinton herself. It later became clear that Kavanaugh knew all along that Foster had committed suicide, and that he had used the power and resources of the independent counsel's office to lend credibility to vulgar sexual rumors about the first lady, in the process needlessly torturing the family of a dead man.

Let's just say there is more than one way to assault someone. In this case, which is proven, he assaulted two women: Hillary Clinton and Vince Foster's widow, Elizabeth.

As of this writing, we don't know whether Republicans on the Judiciary Committee will delay Kavanaugh's confirmation vote or reopen the hearings and call Christine Blasey Ford to testify. But if they are depending on their nominee's reputation as an upstanding, honest, decent adult to outweigh this accusation of sexual assault in high school, they are going to have to find another candidate for the seat.

As Sen. Brian Schatz said in the quote above, Brett Kavanaugh is not just another conservative jurist. He is a professional political operative with a past full of dirty tricks and character assassination. If there is any decency left in the Republican Party this latest revelation will be the straw that breaks the camel's back.