Samantha Bee has a message: "It's never OK to try to rape somebody – not even in high school" 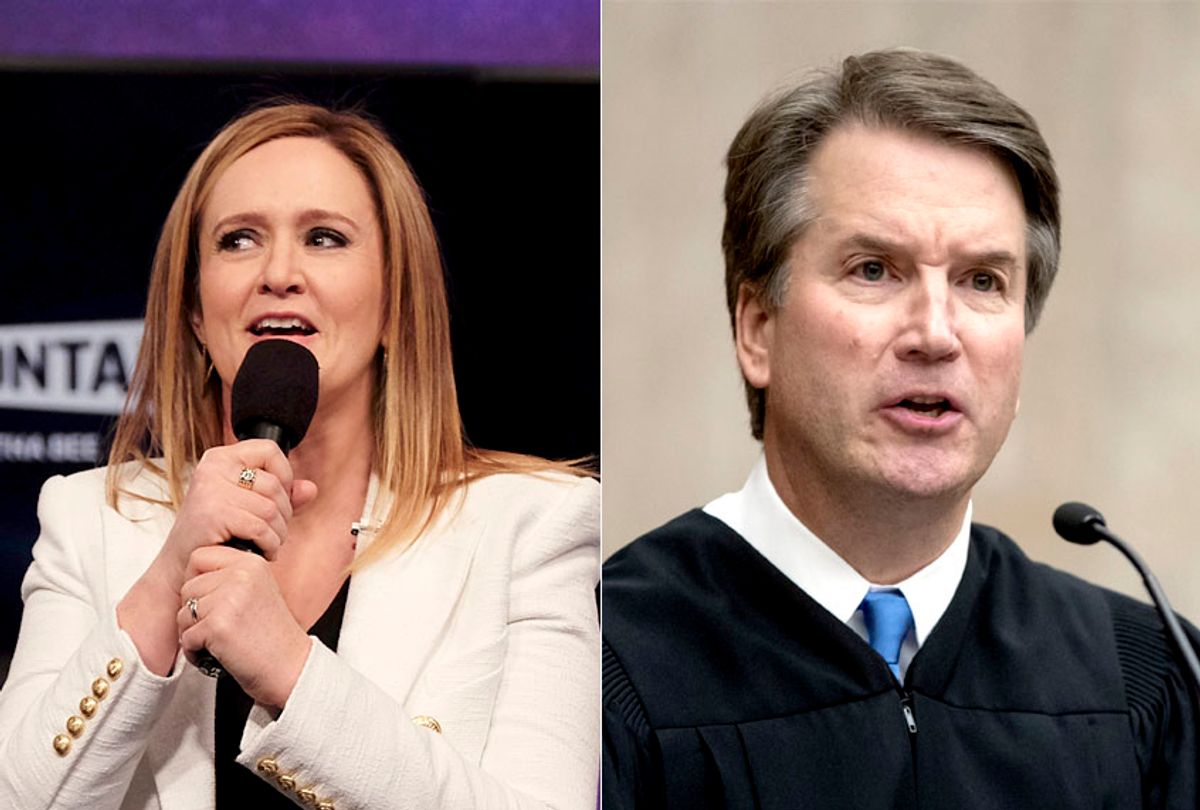 Rarely does TBS' Samantha Bee feel chained to the current news cycle. As a once-a-week late-night show, that usually gives the comedian the freedom to tackle more evergreen, yet critical issues that are not necessarily making headlines. But the sexual assault allegation against President Donald Trump's Supreme Court nominee Brett Kavanaugh was too urgent for Bee to sidestep.

"This week, Brett Kavanaugh's confirmation to the Supreme Court hit — let's face it, probably a week long delay — thanks to allegations of sexual assault in his past," Bee said on Wednesday's episode of "Full Frontal." "Well, we knew he was against a woman's right to choose. We just didn't know that included her right to choose not to be under Brett Kavanaugh."

"Politicians and pundits are already rushing to Kavanaugh's defense," Bee continued, her face visibly confused. "But some of them sound more like they're confessing to something themselves."

"Full Frontal" then aired a series of clips — one of a lawyer close to the White House, who warned that every man could be brought down if accusations of this nature are valid — and a slew of others questioning how a Supreme Court nominee could be disqualified for something he "arguably" would have committed at age 17. This included a radio clip of Sen. Chuck Grassley (R-Iowa) telling "The Hugh Hewitt Show," "I'd hate to have someone ask me what I did 35 years ago."

"Chuck, 35 years ago, you were 50 and a senator!"Bee reminded Grassly. The late-night host added that it's "freaking me out" how many people think they're not accountable for what they or their friends did in high school.

"I can't believe this needs saying, but: It's never OK to try to rape somebody – not even in high school," Bee said. "You must not rape folks on a boat. You must not rape folks in a moat," the comedian rhymed in a Dr. Seuss-like cadence. "You may not must not after dinner. You cannot even if you're a good swimmer. You must rape not a woman or a man. You can quote me, Sam I am."

Bee also addressed the criticisms surrounding the timing of the sexual assault allegation. Many critics on the right have framed the alleged assault as a political maneuver by Democrats in order to derail Kavanaugh's confirmation, even though his accuser, Christine Blasey Ford, had asked for her allegation to remain confidential until it leaked to the press last week.

"How is it never the right time to bring up assault allegations against a rich white dude?" Bee asked, adding that when the victim of Brock Turner, the Stanford student who sexually assaulted an unconscious woman, reported the attempted rape immediately, the presiding judge worried that it would ruin Turner's future. When Ford brought up the assault allegation 36 years later, there were similar questions about Kavanaugh's future. "How much future do rich white guys get to have?" Bee asked.

"Brett Kavanaugh is being considered to serve for life on the highest court of the land. The decisions he makes on the Supreme Court will impact women's bodies for generations. Of course, if he assaulted someone when he was 17 and lied about it, it should impact him for the rest of his life. It sure as hell impacted hers," Bee said of Ford, who says she has received death threats and other forms of serious harassment since she came forward.

"Not to mention Kavanaugh tried to block a pregnant immigrant from getting an abortion," Bee added. "He absolutely thought the decisions that 17 year old made mattered enough to permanently alter her life."