Trump defends Brett Kavanaugh amid mounting allegations: "I am with him all the way" 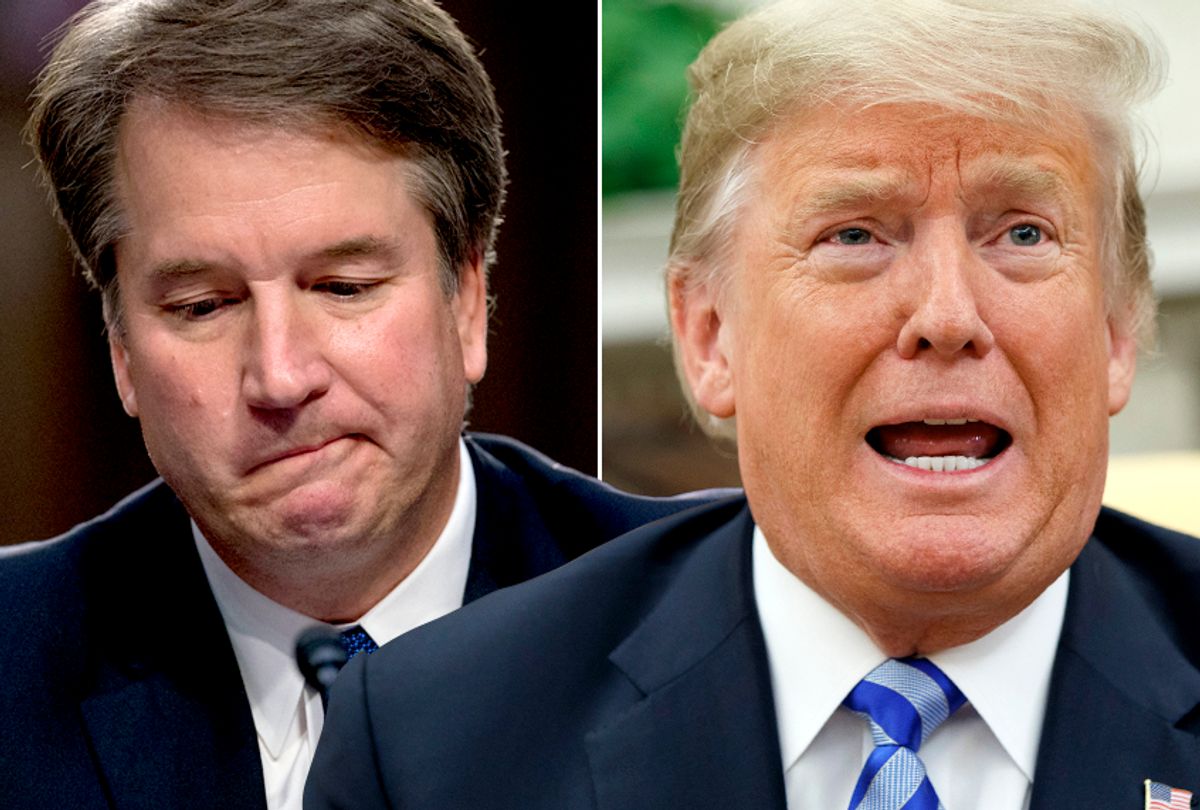 While Brett Kavanaugh, President Donald Trump's embattled Supreme Court nominee, was busy attempting to disprove allegations of sexual assault from one accuser over the weekend, another came forward before daybreak on Monday.

Shortly after terms were finally reached for Christine Blasey Ford to testify before the Senate on Thursday about what the California research psychologist claims was an attempted sexual assault perpetrated by Kavanaugh when both of them were teenagers, a series of news stories dropped that have rocked Kavanaugh's confirmation process to its core.

As reported by Ronan Farrow and Jane Meyer in The New Yorker, a woman named Deborah Ramirez who went to Yale with Kavanaugh recalled that he "had exposed himself at a drunken dormitory party, thrust his penis in her face, and caused her to touch it without her consent as she pushed him away." The story also reported that "the offices of at least four Democratic senators have received information about the allegation, and at least two have begun investigating it," and that Senate Republicans had also been aware of it since last week.

For his part, Kavanaugh decided to share personal calendars with the Senate which he claims makes it very unlikely that he attended a party in the summer of 1982 similar to the one described by Ford, his first accuser, according to The New York Times. "His team will argue to the senators that the calendars provide no corroboration for her account of a small gathering at a house where he allegedly pinned her to a bed and tried to remove her clothing," the Times reported. "The calendar pages from June, July and August 1982, which were examined by The New York Times, show that Judge Kavanaugh was out of town much of the summer at the beach or away with his parents. When he was at home, the calendars list his basketball games, movie outings, football workouts and college interviews. A few parties are mentioned but include names of friends other than those identified by Dr. Blasey."

"I represent a woman with credible information regarding Judge Kavanaugh and Mark Judge," Avenatti wrote on Twitter on Sunday night. "We will be demanding the opportunity to present testimony to the committee and will likewise be demanding that Judge and others be subpoenaed to testify. The nomination must be withdrawn."

Not surprisingly, all of these developments have prompted Senate Democrats to call for a pause in the Kavanaugh confirmation process, as the Chicago Tribune reported:

Sen. Dianne Feinstein of California, the ranking Democrat on the Judiciary Committee, called Sunday night for the "immediate postponement" of any further action on Kavanaugh's nomination. She also asked the committee's chairman, Sen. Chuck Grassley, R-Iowa, to have the FBI investigate the allegations of both Ford and Ramirez.

The New Yorker said it contacted Ramirez after learning of a possible involvement in an incident with Kavanaugh and that the allegation came to Democratic senators through a civil rights lawyer. She had been considering speaking to the magazine for at least a week. Meanwhile, Republicans were pressing for a swift hearing and a vote.

On Monday morning, the president claimed the allegations were made up and politically motivated.

“Judge Kavanaugh is an outstanding person. I am with him all the way,” Trump said after arriving in New York to attend the U.N. General Assembly.

White House counselor Kellyanne Conway told CBS News on Monday that "this is starting to feel like a vast left-wing conspiracy," further defending Kavanaugh's character by arguing "this may be the first time we ever heard of allegations against someone as a teenager that did not prey upon women thus as he became powerful."

Trump expressed the same thoughts at the United Nations on Monday, describing the accusations against Kavanaugh as "totally political" and declaring, "I am with him all the way."