Decoding the Rod Rosenstein melodrama: Distraction from Kavanaugh, or part of a larger plot?

Someone's trying to destroy Rosenstein or lure the media away from the Kavanaugh scandal. Quite likely both 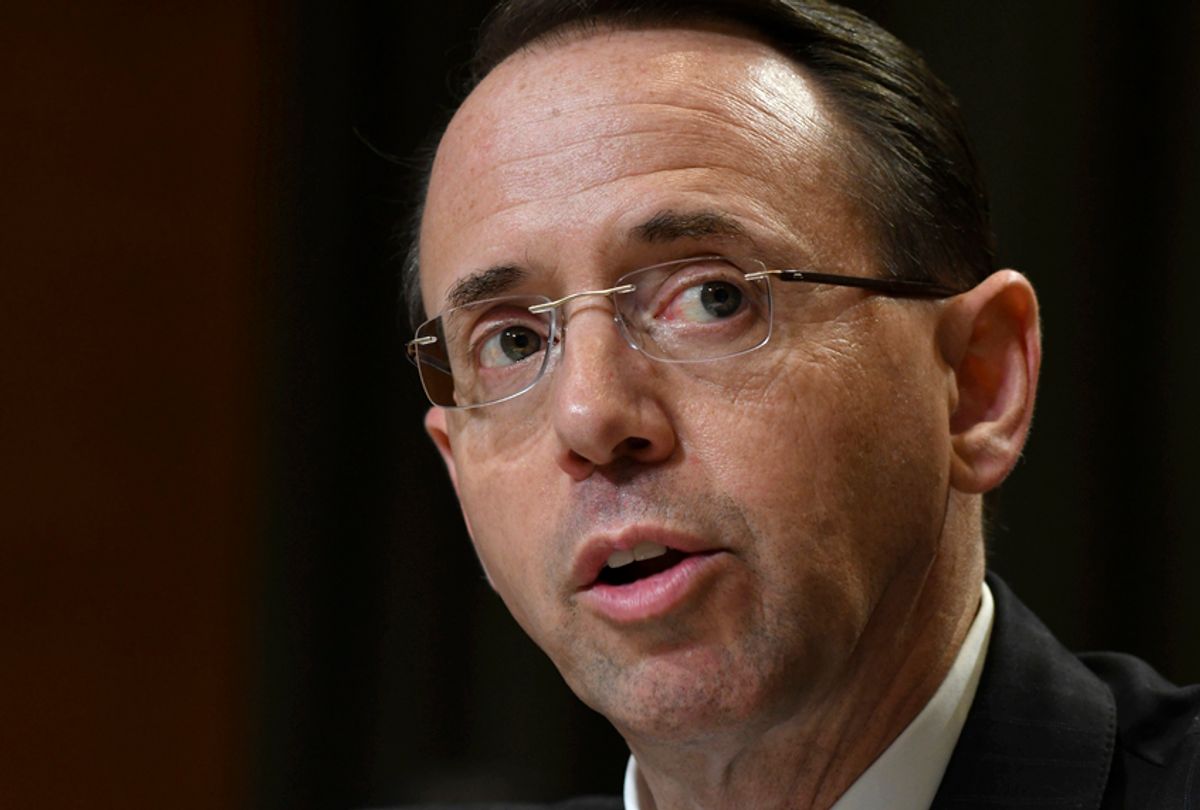 Last Friday the New York Times published a bombshell story reporting that in May of 2017 Deputy Attorney General Rod Rosenstein suggested that he and people interviewing for the job of FBI director should "wear a wire" to record the utterances of President Trump. He allegedly discussed rounding up members of the Cabinet to see if they were willing to invoke the 25th Amendment to remove Trump from office. Rosenstein immediately denied this, also saying that he does not believe the president is subject to the 25th Amendment. Some sources in the Justice Department have subsequently said that Rosenstein was just being sarcastic about the wire.

The Times stuck by its story that Rosenstein was serious about suggesting secretly recording the president but made it clear that there is no evidence that anyone ever followed through. As for the 25th Amendment comment, Rosenstein wouldn't be the only member of the Trump administration to suggest it. Michael Wolff's "Fire and Fury," Bob Woodward's "Fear" and Omarosa's "Unhinged" all contain anecdotes about that option being suggested. (It has never been tried, and it's not at all clear how it would work.) The infamous anonymous New York Times op-ed writer -- identified in this Salon essay by literary scholar Don Foster as likely being Defense Secretary Jim Mattis -- also admitted it had been discussed. Let's face facts: Knowing what we know about this administration, it would much more shocking if nobody had ever brought it up.

The period when this supposedly happened was a particularly tumultuous time, even for this administration. Rosenstein was said to be upset that he'd been ill-used by the president when his memo about FBI Director James Comey's malpractice in his handling of the Clinton email investigation was used as a pretext for Comey's firing. That was especially true since Trump made it clear not long afterward, in his interview with Lester Holt, that he had dumped Comey in an effort to shut down the Russia investigation.

But that wasn't all the president had done. Recall that the day after the Comey firing Trump met with  Russian ambassador Sergey Kislyak and Foreign Minister Sergey Lavrov in an unannounced, off-the-record meeting in the Oval Office. The president told his visitors he had fired the "nutjob" FBI director and said, "I faced great pressure because of Russia. That’s taken off.” Then he proceeded to share sensitive classified information with the two Russians, making clear it had come from Israeli intelligence.

That period after Comey was fired obviously shook the FBI and the Justice Department. They were aware of Michael Flynn's lies, Russian interference in the election and quite likely other things we don't know about. It's hardly surprising that they would have been brainstorming such possibilities as the 25th Amendment.

Nobody knows who leaked this story to the Times. It was relayed through several layers of anonymity and is based mostly on hearsay about notes from two meetings that took place on the same day, documented by Department of Justice lawyer Lisa Page and the since-fired former FBI acting director, Andrew McCabe. There has been plenty of criticism of the Times for its sourcing on this story and it seems clear that the person or people from whom the information came are no friends of Rosenstein. He is portrayed as "erratic," "nervous" and "emotional," which suggests this story may have been planted in order to portray him as weak and unstable and lay the groundwork for his dismissal.

McCabe, who is facing a criminal probe for lying to the DOJ inspector general, adamantly denies providing his memos to the Times. He has said that he believes protecting the Mueller investigation is vital to the integrity of law enforcement and points out that he personally sacrificed to ensure that it was put on the right course. He wrote that "if the rumors of Deputy AG’s Rosenstein’s departure are true, I am deeply concerned that it puts that investigation at risk." He's clearly right about that.

After the Times story broke, Gabe Sherman at Vanity Fair reported that White House communications director and former Fox News president Bill Shine was launching a major campaign for Rosentein's ouster, and that Fox luminaries Laura Ingraham and Jeanine Pirro immediately got on board. But that same night Sean Hannity took to the Fox airwaves to addressed the president directly, claiming he had it on good authority that the story was a set-up and that Trump shouldn't fire Rosenstein or anyone else. Ingraham and the others quickly reversed course and the president didn't make a move.

Fast forward to Monday, when amid all the Kavanaugh Sturm und Drang Axios reported that Rosenstein had resigned and had been summoned to the White House, sending the media into convulsions. That clearly wasn't true, and subsequent reports in other media suggested that Rosenstein was about to be fired, the difference being relevant to what happens next with the Mueller probe. That's a complicated issue that sheds little light on why Rosenstein would either choose to resign or force the president to fire him. It's a bad situation either way.

The White House at first offered no talking points, and it seemed nobody had a clue what was really going on. Rosenstein met with White House chief of staff John Kelly and reportedly spoke on the phone with Trump in New York, after which it was announced that the two men would meet on Thursday. The New York Times' "tick-tock" of the day's events once again portrayed Rosenstein as "emotional" in his meetings and calls on Monday, banging yet another nail in his coffin.

This is a confounding story. Only the Times knows who's leaking these "erratic" Rosenstein tales and it's not clear its reporters know whether they are being used for nefarious purposes (or whether they care). According to Vanity Fair's Sherman, the White House is pushing the Rosenstein drama in hopes of burying the growing scandal around Supreme Court nominee Brett Kavanaugh, which could explain a Thursday meeting was scheduled between Trump and Rosenstein, in direct conflict with the Senate hearing at which Kavanaugh and his initial accuser, Dr. Christine Blasey Ford, will testify. Hannity and company are of course insisting this is all a set-up by the "deep state" and the Democrats. Whatever the motive, the consequence is a week of unbelievable chaos. Perhaps that's the idea.

One thing is clear, however. The Justice Department and the FBI are now following the lead of the White House, breaking down into competing camps with opaque agendas and self-serving leaks to the media. Bureaucratic infighting is certainly nothing new. But the crudeness of it, with the nasty personal jibes at Rosenstein and a clear intention to provoke an angry explosion by the president, is a very Trumpian strategy. His "Mad Max" management style is infecting the entire government, and in fact the entire culture.