GOP will still confirm Brett Kavanaugh — because of allegations, not in spite of them

Republican leaders know that to stop #MeToo they must scare women into silence. Confirming Kavanaugh may do it 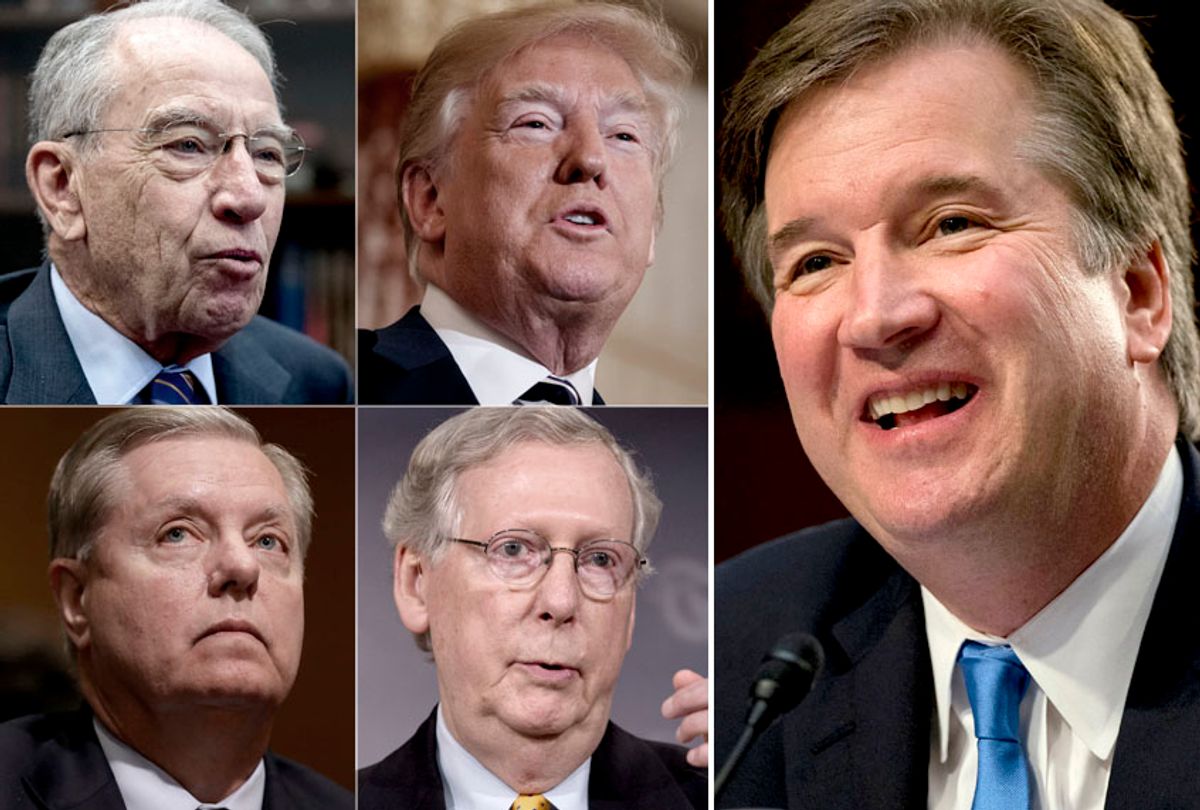 On Thursday, the Senate Judiciary Committee will finally hear testimony regarding the sexual assault allegations against Brett Kavanaugh, Donald Trump's nominee to the Supreme Court. That only happened after tense negotiations with Kavanaugh's accuser -- that is, one of the three -- Christine Blasey Ford. But for many political observers, it's genuinely puzzling that this is going ahead at all.

While the timing before midterms might be tight, and Republicans clearly want to secure this seat on the high court before facing likely election losses in November, there is still time for Trump to pick another judge off the Federalist Society list he's relied on throughout his presidency. Vox recently published a list of four potential nominees who could be dropped into Kavanaugh's place without missing a beat, who presumably do not come with multiple accusations of drunken sexual assault.

Why are Republicans so ready to stick with a guy credibly accused by three women -- especially in the #MeToo era, when there's significant political fallout awaiting anyone who is perceived as minimizing, covering for or excusing sexual misconduct? Viewed through the lens of horse-race politics, where everything is about media spin and electoral calculus, the GOP's unwillingness to swap out Kavanaugh for someone else looks baffling.

But if one accepts the possibility that some considerations matter more than the immediate political fallout, then the choice makes more sense. I would argue that, in a way, Republican leaders are sticking with Kavanaugh not despite of the sexual assault allegations, but because of them. They are no doubt highly aware that the #MeToo movement has damaged the ability of powerful men to treat women however they like and get away with it. By rushing forward with the Kavanaugh confirmation, and refusing to treat the allegations against him with anything approaching seriousness or respect, Republicans can strike a major blow in the backlash to #MeToo.

Handing feminists a major defeat, at this historical moment, can go a long way towards rebuilding the world the way that powerful men like it, where they can harass and abuse women, sometimes even rape them, and get away with it. In the long run, that goal takes priority over more immediate concerns, such as who wins a majority in the midterm elections.

"We sometimes believe that people who work in politics are infinitely cynical, that there's nothing they won't do for political advantage and no goal that takes precedence over winning," Paul Waldman writes in the American Prospect. But ultimately, having power is about imposing your values and vision of the world on society. For a lot of men, especially powerful, conservative men, it's extremely important to keep women in a submissive, objectified role. That, in their view, is a goal worth sacrificing for.

Republican men haven't really concealed this goal, either. There's the White House lawyer who told Politico that "every man should be worried" about the impact of the Kavanaugh accusations. There's Rep. Kevin Cramer, R-N.D, now a Senate candidate, asking: "Even if it's all true, does it disqualify him?" Watching Bill Cosby finally go to prison for rape no doubt adds to the sense of panic that the old order, in which such things were easy to get away with, could be giving way to a new order of male accountability, If something big isn't done to scare victims away from speaking out, it may be too late.

It's not just conservatives, either. The world of liberal-leaning intelligentsia was recently thrown by the prestigious magazines Harper's and the New York Review of Books publishing lengthy, incoherent and dishonest essays from Jian Ghomeshi and John Hockenberry, two popular radio hosts who have lost jobs due to serious allegations of harassment and, in Ghomeshi's case, outright sexual violence. Both essays focused on these men portraying themselves as victims of some kind of mass hysteria, and minimized both the severity of the accusations and the overwhelming evidence that supported them.

Truly, it was some of the worst writing ever published by either magazine, and led to the firing of the editor of the New York Review of Books. Earlier this year, the former editor of Harper's publicly claimed he was fired for objecting to the publisher's insisting on running another incoherent diatribe against the #MeToo movement, this one by longtime anti-feminist scourge Katie Roiphe.

The moral of these stories is that a lot of men take the mission of intimidating women into silence very seriously, and are willing sacrifice a lot — their jobs, their employees, the reputation of venerable magazines — to protect long-standing norms where men get to harass and even assault women, and women stay quiet about it.

This also explains why Republicans continued to bash Anita Hill for years after Clarence Thomas was confirmed to the Supreme Court. It served no partisan ends, after all, and almost certainly damaged the GOP at the ballot box and in terms of public perception. The entire point of the continued caricatures and accusations was to let women know that the price of speaking out was incredibly high -- and that it wasn't worth it, since justice would not be served.

Donald Trump's election in 2016 might also be a major factor in the Republican calculation. Trump won a wide margin of the male vote after he was accused by more than a dozen women of sexual abuse or sexual assault, and being caught on tape bragging about it. For many of those voters, sticking with Trump was an affirmation of their belief that men should be able to harass and assault women, and a major defeat for feminists who dared challenge that male privilege.

For Republicans, there may be a real fear that letting go of Kavanaugh would signal to their base that the party has surrendered to the #MeToo movement. They have every reason to believe that aging male conservatives support them specifically to stifle feminist efforts at securing women's equality, and that the base expects them to take a stand on behalf of continued male privilege and dominance.

Even if Republicans knew for a fact that confirming Kavanaugh would hurt them in the midterms, I believe they'd do it anyway. The point of having power, for many if not most prominent Republicans, is to protect and advance their worldview, which is most certainly one where men are dominant and women are second-class.

Either way, at this writing it seems clear that Republicans on the Senate Judiciary Committee are structuring Thursdays' hearing to send a strong signal discouraging victims from speaking out, by making it clear they will be railroaded, ignored and defamed. Despite all the noises from Republicans about hearing out Christine Blasey Ford, their actions have been geared towards discrediting her before she even speaks: No other witnesses will be called, no investigation will be conducted, and the two subsequent accusers will be dismissed out of hand. The committee vote is set for Friday morning, which is the Republican way of signaling that they don't care if Ford's story is true or not, because they're confirming Kavanaugh anyway.

This also explains why there have been logical inconsistencies and flagrant lies in the defenses of Kavanaugh. We're told both that he didn't do it and that doing it wasn't a big deal. Logically, these two propositions contradict each other, but both are a form of asserting that women's stories aren't worth consideration in any real sense: Either the ladies are delusional, or they're blowing things out of proportion.

Kavanaugh's efforts to portray himself as a chaste and sober Boy Scout in high school were swiftly and predictably discredited by plenty of eyewitnesses and, of course, by his own calendar and yearbook, which portray him as a hard partier who loved gross jokes mocking women and bragging about his alcohol consumption. But the flagrant lies also signal to women that they may as well stay silent. After all, if a man can tell obvious honking falsehoods about his past and still be officially "believed" over a well-substantiated accusation, that makes clear to other women that the truth doesn't matter. All that matters is male privilege and power.

This realization — that those things count for more than truth or justice — is precisely what has kept women silent about rape, assault and harassment in the past. We hear it over and over from victims: They didn't speak out because they wouldn't be believed. They tried to speak out and were not believed.

To shut down the #MeToo movement, one must kill off the hope that the truth matters more than male power. Proving to women that speaking out is useless is what is needed to protect men from accountability. That is exactly what Republicans hope to achieve by seating Brett Kavanaugh on the Supreme Court -- because of the allegations against him, not despite them.