Will two Republican women in the Senate stop Brett Kavanaugh? 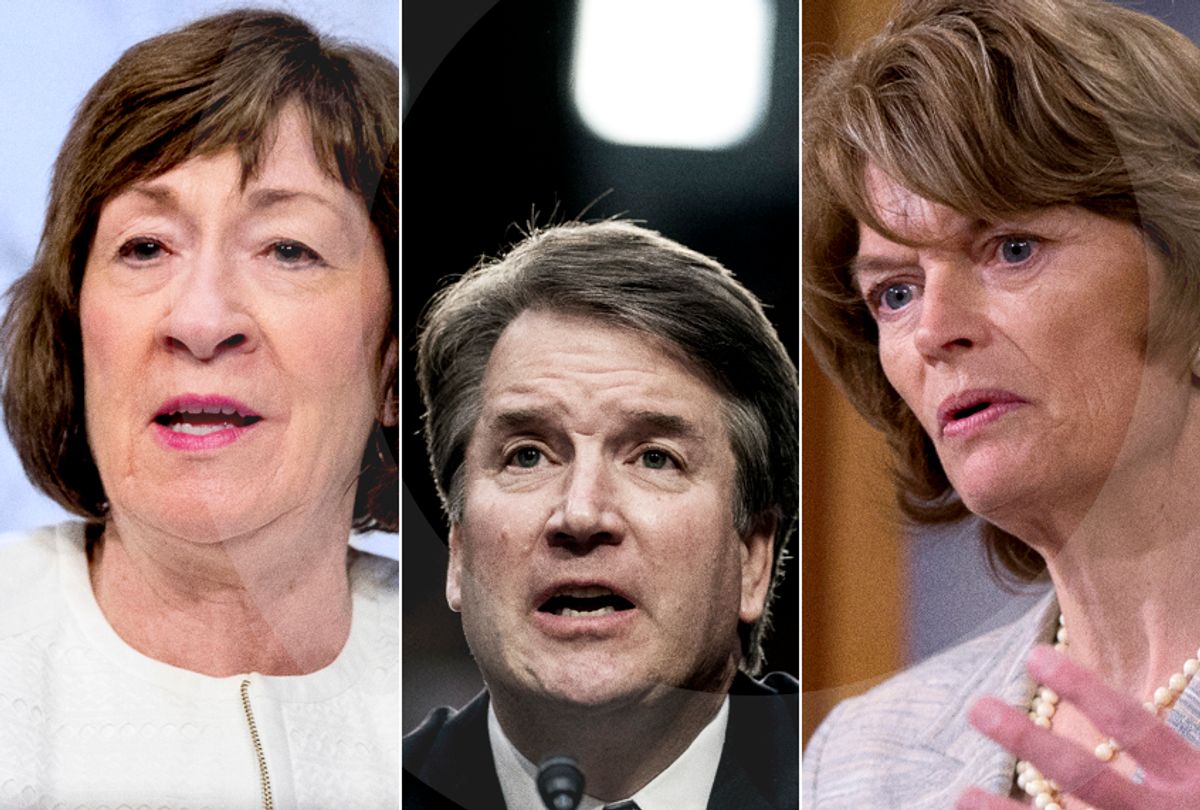 Every so often, history unfolds in such a way that the most consequential decisions wind up resting on the shoulders of a handful of people. Because President Donald Trump has nominated Brett Kavanaugh to the Supreme Court, his confirmation could conceivably lead to the overturning of abortion access, LGBT rights, environmental protections, labor rights and business regulations, to name just a few of the massive policy changes that could be in store.

Further complicating matters, of course, is the fact that two women have come forward to accuse Kavanaugh of sexual misconduct. Still, Republican leaders in the Senate have already scheduled a Judiciary Committee vote on Kavanaugh for Friday, the day after Christine Blasey Ford, the judge's first accuser, is scheduled to testify on Capitol Hill. To nearly all observers inside or outside the Beltway, this rush to confirmation feels like political expediency, no matter how much Republicans insist they want to give Kavanaugh's accusers a fair hearing.

Since Republicans currently control the Senate with a 51-49 majority, it would presumably take just two Republican senators to thwart Kavanaugh's confirmation. (That's assuming that all 47 Democrats, plus the two independent senators, vote against him.) This is where Sens. Susan Collins, R-Maine, and Lisa Murkowski, R-Alaska, come into play.

"Susan Collins and Lisa Murkowski … those are the most important Republicans. I have every reason to believe that if Lisa Murkowski and Susan Collins came out against this nomination, there would be a majority to oppose [him]," Brad Woodhouse, the executive director of Protect Our Care, told The Hill. A spokeswoman for Murkowski also told the publication that "we've definitely gotten some [calls] on both sides" regarding Kavanaugh's nomination, revealing the intensity of feeling on the issue.

Another piece in The Hill revealed that Murkowski's decision will quite likely depend on Collins' vote -- and that her vote will likely determine whether Kavanaugh's confirmation goes through.

Kavanaugh will have virtually no chance at confirmation if Collins says she believes Christine Blasey Ford’s allegation that he sexually assaulted her at a high school party in 1982, according to people on both sides of the partisan Supreme Court fight.

On the flip side, it will be very difficult for Democrats to muster the votes to stop him if Collins rejects Ford’s accusations as insufficiently substantiated and announces support for Kavanaugh.

Senate Republican aides think that Sen. Lisa Murkowski (R-Alaska) will likely vote the same way as Collins, who thus far has played a more vocal role in the debate over Kavanaugh.

“We’re talking about a jury of one: Susan Collins,” said a senior GOP aide.

It is entirely possible that Collins will react to this dilemma by punting — that is, insisting that more time needs to be taken to investigate the accusers' claims as well as vet Kavanaugh's record. While this would most likely doom Republican hopes of confirming Kavanaugh before the midterm elections, it could also spare Collins the need to make any immediate political decision.

Jennifer Rubin of the Washington Post made this very argument in an editorial on Tuesday.

If the Thursday hearing comes along and Ford appears sincere and credible while Kavanaugh insists he didn’t know her, never behaved that way, wasn’t a habitual heavy drinker (his roommate at Yale says he was an excessive drinker) and insists that Mark Judge, a friend from high school days, wasn’t involved in any sexual exploits with him, she’ll have three options: 1.) Vote to confirm, incurring the wrath of pro-choice voters, sexual-assault victims’ groups and every Democrat in Maine; 2.) Vote against confirmation, risking confrontation (heavens to Betsy!) with her party or 3.) Stick to her original argument that both accusers need to be heard. She doesn’t have to say yes or no, at least not for some time, if she merely invokes the process that was used in the Anita Hill matter — an FBI investigation, hearings with multiple witnesses and a full vetting of his record.

If Collins does reject Kavanaugh's nomination, she will be showing the same independence that prompted her to join both Murkowski and the late Sen. John McCain of Arizona in defeating the Republican Party's "skinny repeal" of the Affordable Care Act last year. And if she votes to confirm Kavanaugh, and it it later becomes clear that he was guilty of sexual misconduct or will push aggressively for a far-right, anti-choice agenda, Collins may face serious political consequences.