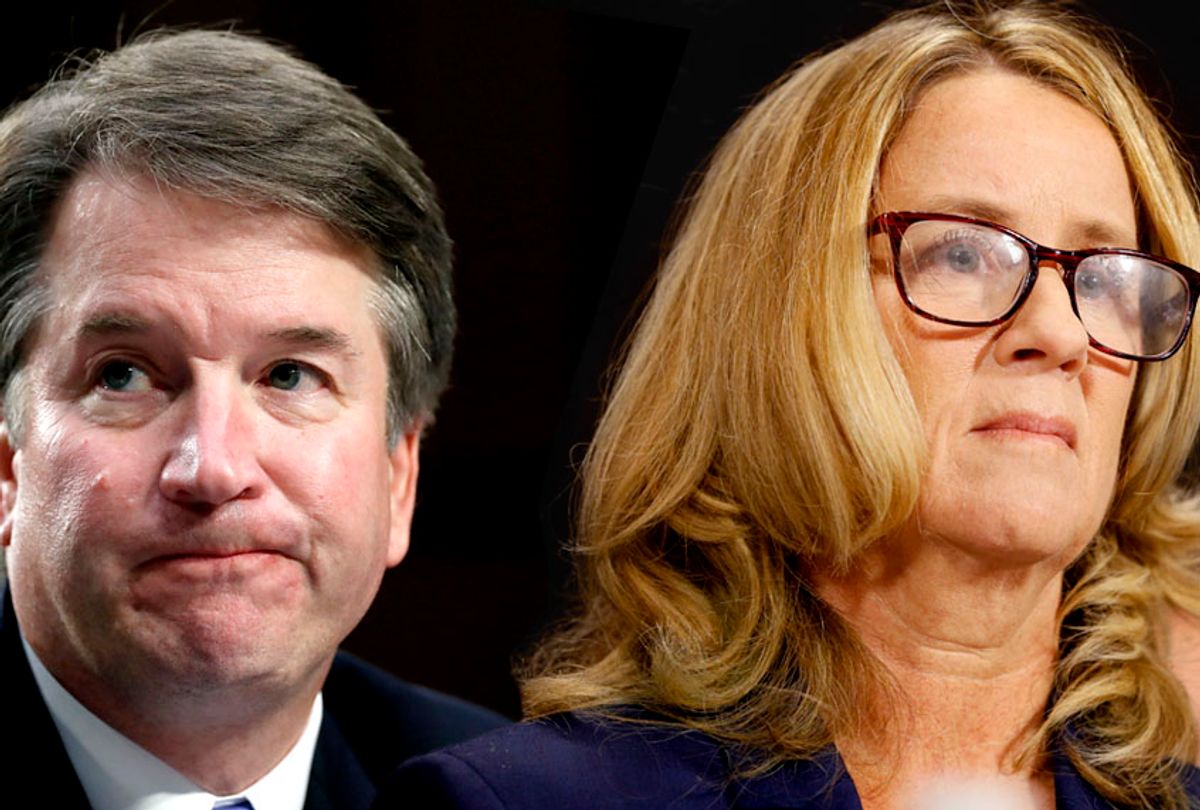 Dr. Christine Blasey Ford, the university professor who has accused Brett Kavanaugh of attempted rape in the 1980s, testified to the Senate Judiciary Committee that she was "100 percent" certain that President Donald Trump's nominee for the Supreme Court had assaulted her.

Sen. Patrick Leahy, D-Vt., asked Ford about her strongest memory of the assault that she alleges Kavanaugh committed during a high school party with his friend, Mark Judge, a conservative writer, present.

"The uproarious laughter of the two and their having fun at my expense," she said. "I was underneath one of them as the two laughed – two friends having a really good time with each other."

In her opening statement to the Senate Judiciary Committee, an emotional Ford began, "I am here today not because I want to be. I am terrified. I am here, because I believe it is my civic duty to tell you what happened to me while Brett Kavanaugh and I were in high school."

"I believed he was going to rape me. I tried to yell for help. When I did, Brett put his hand over my mouth to stop me from screaming . . . It was hard for me to breathe, and I thought that Brett was accidentally going to kill me," she continued, her voice quivering.

Ford also said she did not speak out about the alleged assault because she didn't want to tell her parents she had been in a house drinking with boys, without any adults present, at age 15.

"I was too afraid and ashamed to tell anyone these details," she said. "I convinced myself that, because Brett did not rape me, I should just move on and pretend it didn't happen."

During questioning from Sen. Dianne Feinstein, D-Calif., the ranking member of the panel, Ford testified that she had suffered from "anxiety, phobia, and PTSD-like symptoms . . . more specifically, claustrophobia" as a result of the assault. She also claimed that she had "struggled academically" and socially in college after the incident.

Ford further asserted to Feinstein that there was no way this could be a case of mistaken identity. Kavanaugh's testimony will follow.

The make-or-break-it hearing comes a day before the committee is scheduled to vote on Kavanaugh's nomination, as scheduled by Chairman Chuck Grassley, R-Iowa. Senate Republican leaders eye a full Senate vote on the nomination by early next week, aiming for Kavanaugh to be confirmed and sworn in as a justice soon after the high court kicks off its new term Monday. Kavanaugh was nominated by Trump to the fill the seat vacated by Justice Anthony Kennedy, who was a key swing vote on the high court.

Senate Republicans — desperate to avoid the bad optics of an all-male panel interrogating an alleged sexual assault victim — outsourced their questions to a female lawyer who grilled Ford on their behalf. The outside litigator, Rachel Mitchell, is a sex crime prosecutor from Arizona who has pushed for changes in the courtroom to comfort and serve victims of assault. She will stand in for Republicans during Thursday's much-anticipated testimony. It is unclear if Mitchell will question Kavanaugh, as well.

According to Vanity Fair's Gabriel Sherman, President Trump is "telling people he's furious that White House aides didn't have advance knowledge of how credible Ford would seem." Trump is reportedly angry with White House counsel Don McGahn "for putting him in this situation," Sherman said in another tweet.

CNN's Kaitlan Collins reported earlier that Trump and Vice President Mike Pence had both called Kavanaugh to express their support ahead of Thursday's hearing.

Citing a person familiar with the call, Collins reports Trump's message for Kavanaugh: "Be aggressive and forceful in your denials. Don't be afraid to push back on these allegations."

Sen. Lindsey Graham, R-S.C., falsely claimed to reporters that Democrats are never accused of sexual misconduct and warned that Republicans would come forward with false allegations as payback.

"Let me tell you, my Democratic friends, if this is the new norm, you better watch out for your nominees," he warned.

Graham also told reports that Ford's decision to hire "a lawyer and taking a polygraph test makes me more suspicious." (On Wednesday, Ford's legal team send a letter to the Senate Judiciary Committee with the results of Ford's lie detector test, which indicated that she had told the truth when she alleged that Kavanaugh had assaulted her.)

The South Carolina congressman also said Kavanaugh is "just as much a victim of this as I think Brett Kavanaugh."

In response to Republican curiosity about who paid for Ford's polygraph test (her legal team said they did), Sen. Amy Klobuchar, D-Minn., tweeted, "I got the polygraph test Dr. Ford took showing truthfulness about her account in the record. To quote a judge: 'law enforcement agencies use polygraphs to test the credibility of witnesses' & the tests 'serve law enforcement purposes.' That judge was Brett Kavanaugh in 2016 case."

Ford told The Washington Post earlier this month that Kavanaugh thrust her in a bedroom at a party when they were both in high school, locked the door, pinned her to the bed, groped her over her clothes, pushed his body against hers and put his hand over her mouth to stop her from screaming.

A second allegation was detailed Sunday by a former Yale University classmate of Kavanaugh's, Deborah Ramirez, who claimed that Kavanaugh exposed himself to her and thrust his penis in her face at a party while they were both freshmen at the university. Ramirez described the alleged incident to The New Yorker in an article published on Sunday.

Michael Avenatti, the attorney representing adult-film actress Stormy Daniels in her lawsuits against President Donald Trump and his former lawyer Michael Cohen, revealed Wednesday that he was representing Julie Swetnick, a third accuser.

Swetnick, who has held federal government posts at the Internal Revenue Service, the U.S. Mint and the Treasury Department, has alleged that Kavanaugh and his high school friend Mark Judge drugged and gang-raped multiple women at parties during their high school years — and that she once became a victim herself.

In addition, the Senate inquired about at least one additional allegation of misconduct against Kavanaugh – an incident that allegedly occurred in 1998 – NBC News reported Wednesday.

Kavanaugh has vehemently denied all of the accusations.

The Senate Judiciary Committee is chaired by Republican Sen. Grassley of Iowa. Sen. Feinstein of California is the top Democrat on the committee.

The other Republican senators on the committee include Jeff Flake of Arizona, Mike Crapo of Idaho, John Kennedy of Louisiana, Ben Sasse of Nebraska, Thom Tillis of North Carolina, Lindsey Graham of South Carolina, John Cornyn of Texas, Ted Cruz of Texas, Mike Lee of Utah and Orrin Hatch of Utah.