Lindsey Graham and Brett Kavanaugh: Welcome to the smoldering ruins of American democracy

Lindsey Graham is a massive hypocrite. But his outburst during the Kavanaugh hearings point hinted at deeper truth 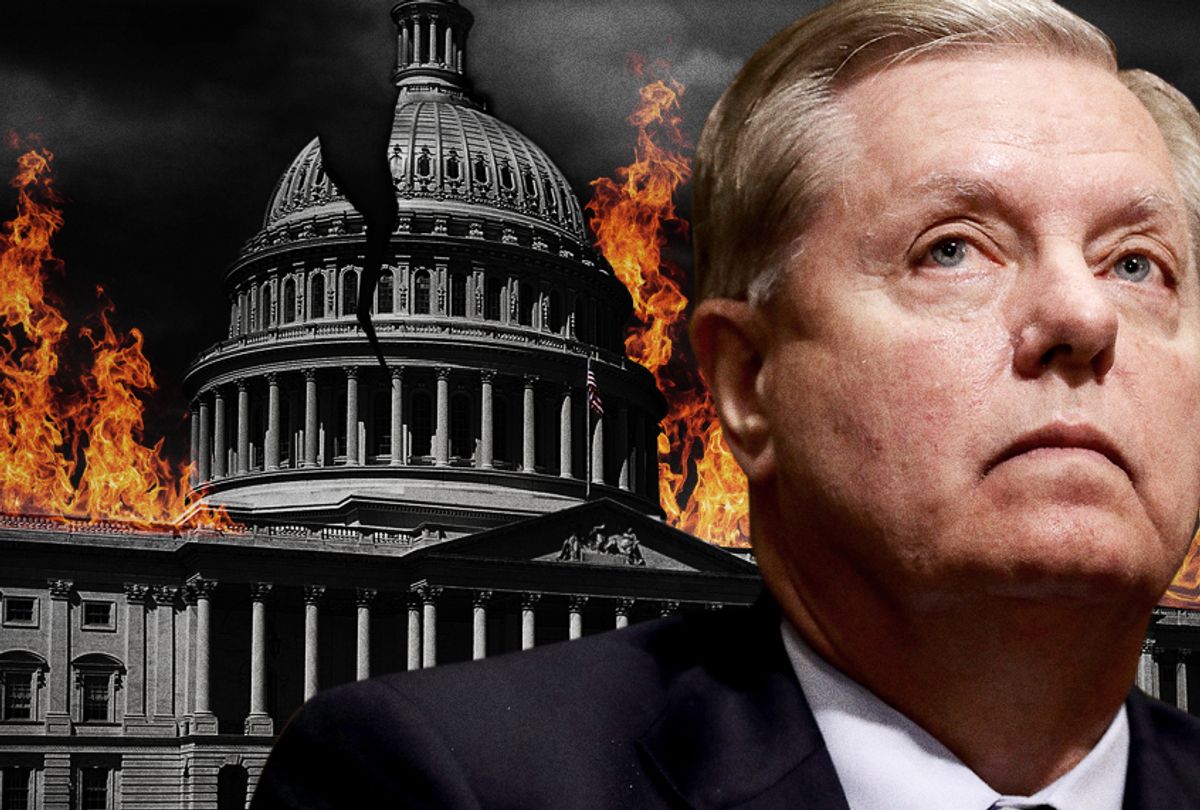 What do we know now that we didn’t know before the grotesque carnival of Brett Kavanaugh’s appearance this week before the Senate Judiciary Committee, where we were treated to the spectacle of a supposedly eminent jurist and Supreme Court nominee spitting, weeping, screaming in red-faced rage, indulging in mawkish sentimentality and belligerently refusing to answer questions? Nothing good.

Perhaps the exercise was instructive for many people nonetheless. I found myself startled to conclude, partway through the hallucinatory national ordeal of Thursday’s hearing, that Kavanaugh was right about something, if not precisely in the sense he intended. During his opening monologue — although I think that’s not technically the correct term — Kavanaugh pronounced, “This confirmation process has become a national disgrace.” Who could possibly disagree?

A few minutes later into the judge’s tirade, after he had accused Senate Democrats of staging a last-minute partisan smear campaign to derail his nomination and spoken darkly about “outside left-wing opposition groups” (what does “outside” mean here — outside of what?), Kavanaugh concluded: “This is a circus. The consequences will extend long past my nomination. The consequences will be with us for decades.” Again, full marks, Judge. Or let’s say a solid B-plus. Nice job of acknowledging the obvious.

I felt a similar reaction, even more strongly, to the scene-stealing outburst later in the hearing from Sen. Lindsey Graham of South Carolina, whose personal transformation from staunch defender of the old-line Republican Party faith into Trump-worshiping homunculus is among the more mysterious phenomena of this depraved political era. Early in the 2016 campaign, I once pursued Graham down a school hallway in suburban New Hampshire, trying to get close enough to extract a few one-liners out of him about Donald Trump. I gave my number to one of his aides and, randomly, to one of Jeb Bush’s sons, who both promised Graham would call me. That didn’t happen, and now look.

Graham’s ire on Thursday was of course directed at the alleged Democratic conspiracy to undermine Kavanaugh’s nomination — and by extension the entire Trump presidency — but to my ears his language carried multiple levels of meaning. Graham described the confirmation process as “the most unethical sham since I’ve been in politics,” adding, “I can’t think of a more embarrassing scandal for the United States Senate since the McCarthy hearings.” He ended by warning Republican colleagues that if they oppose Kavanaugh they’ll be “legitimizing the most despicable thing I’ve ever seen in politics.”

As others have noted, it’s pretty rich to get a high-minded lecture about unethical or despicable conduct in politics from the guy who served as House manager of Bill Clinton’s impeachment trial, and whose party over the last 20 years or so has pursued no clear agenda beyond obstruction, negation and outright nihilism. (Cough, cough, Justice Merrick Garland.) Graham’s rhetoric might be more accurate applied to his own side of the Kavanaugh debacle than to the Democrats, who have largely persisted with an (ineffective) politics of coalition-building and compromise. But I'm not arguing that either party is blameless when it comes to our political dysfunction, and that’s not the point.

What struck me on Thursday is that guys like Graham and Kavanaugh, who have pretty much had things exactly the way they wanted them for their entire lives, have finally been forced to notice that American politics fundamentally does not work. Whether or not you read Graham’s tirade as a man-in-the-mirror moment, where he unintentionally revealed himself, he has a point. From any possible point of view, this confirmation — and indeed the entire political ecosystem around it — has become a sham, a circus, an embarrassing scandal and a national disgrace. In an environment where Americans agree about nothing, we can probably agree about that.

I often feel that nothing in the Trump era can be shocking, but Kavanaugh’s Thursday appearance was downright astonishing. The fact that anyone, of any political party, could believe that person (rapist or not) is well suited to be a Supreme Court justice beggars belief. It was like watching Richard Nixon’s “Checkers” speech performed by a minor, doomed character on “Breaking Bad.” Or to use a more apposite reference, it was like getting into a conversation with that guy next to you at the bar who seems affable enough at first but turns out to have a long litany of grievances against women, banks, former bosses, the “liberal media” and the Clintons.

I’m not sure how they’ll manage to mock that episode in a “Saturday Night Live” sketch, since it already was one: Of course I’m not a mean drunk, goddammit! What about you, Ms. Senator Lady? I was afraid Kavanaugh was going to rip his shirt off and invite Sen. Mazie Hirono to punch him in the stomach: “Harder! Come on, harder!” But watch out for the Ralph reaction.

Everyone on the planet has already noted the dramatic contrast between Kavanaugh’s demeanor and that of Christine Blasey Ford, the woman who has accused him of trying to rape her 36 years ago. Despite clearly feeling distressed or overwhelmed by her bizarre moment in the spotlight, Ford remained calm, clear-headed and largely cheerful. She said several times that she wanted to be “helpful” to the committee, which as numerous female commentators have observed (including Salon’s Amanda Marcotte) is a heavily gendered term.

A side note: Would I have noticed that on my own? Probably not. This was one of those occasions when men, especially those of us in the media accustomed to our own freedom to bloviate, were best served trying to listen and learn.

I think the distance between Ford’s manner and Kavanaugh’s can at least partly be separated from the question of which of them is telling the truth. Indeed, I find it entirely plausible that Ford’s account is true and Kavanaugh believes that his denials are true, or has convinced himself they must be. Given the evidence before us, I don’t think a severe personality disorder or chronic, untreated alcoholism, buried under layers of denial, are out of the question.

Christine Blasey Ford showed up before that committee out of an earnest desire to help the United States Senate learn the truth about Brett Kavanaugh, and an earnest belief that that was the point of this whole process. Even if we concede that some Democrats saw a political opportunity in her testimony and embraced it — which is deeply shocking, I know — there was no hint of that kind of motive in her personal story or its delivery.

Kavanaugh, on the other hand, showed up brim-full of righteous outrage at the very suggestion that there could be any truth to learn about him that is not obvious on the surface. His air of wounded entitlement and his evident fury that anyone would dare question his integrity reflect a central code of his gender, background and class: Appearance is reality. Men like him are deemed to be exactly what they appear to be (at least by their peers) and any evidence to the contrary is not evidence at all.

In other words, Kavanaugh understood the Senate confirmation process as a sham ritual or reality show, something like the “trials” conducted by Judge Judy, but with less mystery about the outcome. Exactly how Lindsey Graham understands the meaning and purpose of these hearings, in his current, tormented Gríma Wormtongue mode, is a matter for philosophers and psychiatrists to ponder.

Christine Blasey Ford, on the other hand, understood these confirmation hearings in straightforward terms, as a genuine effort to uncover the facts. That may have been naïve, but it also created an important moment of national disruption and national shame whose repercussions, as Kavanaugh said himself, will last for decades. These competing views of constitutional process and political reality came into direct conflict this week, and the result was something like what happens in science fiction when matter encounters antimatter.

It is perhaps a hopeful sign, in the long run, that men of the Kavanaugh-Graham class are at least forced to confront the possibility of facing consequences for their behavior, and also to acknowledge that the political rituals that enshrined and protected their power no longer function as seamlessly as they once did. But the long run could take a very long time indeed, and the pain and disgrace of this moment and others to come will be difficult to bear. America’s political decay continues, and we have not hit bottom yet.