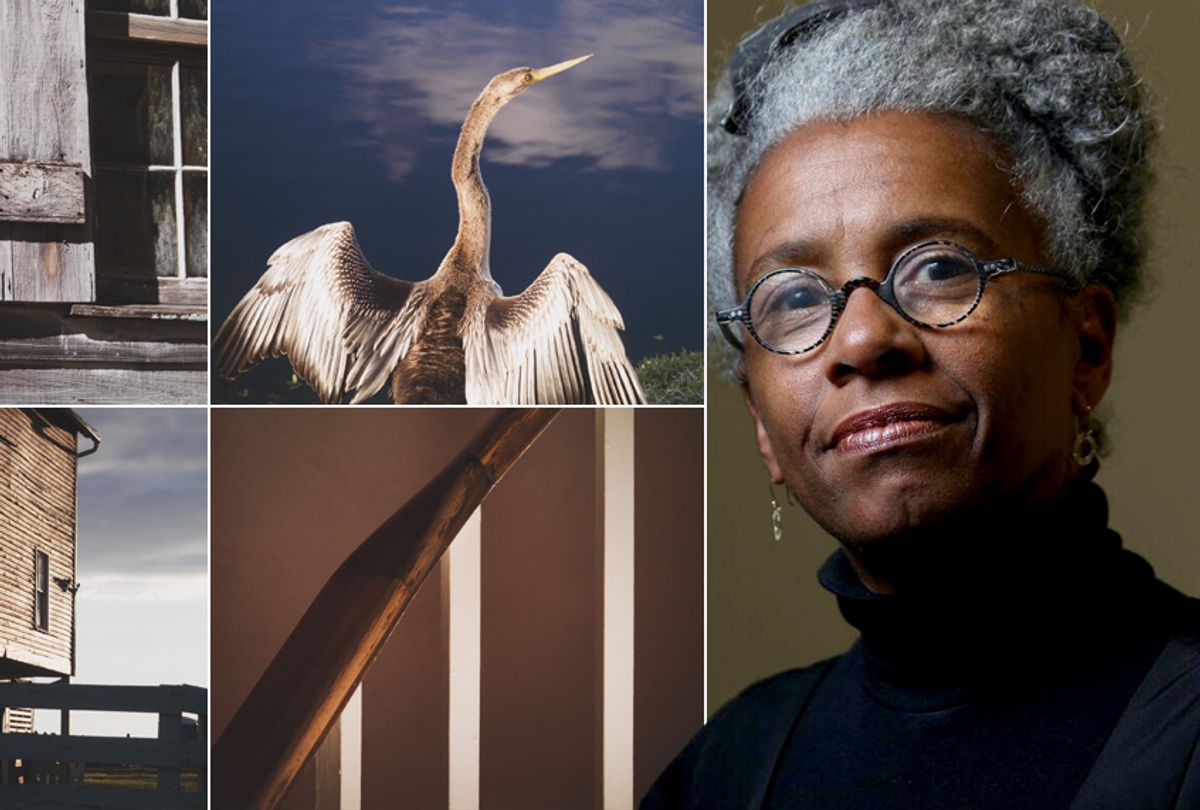 This article was co-produced with Original Thinkers, an ideas festival that uses speakers, art and film to create new paradigms. The 2018 festival takes place in Telluride, Colorado from October 4–7.

Though slavery officially ended over 150 years ago, many of the fruits of slave labor still exist, intact, in the United States. Keris Salmon, an artist with roots as a journalist, spent years documenting plantations in the South, applying her photographer’s eye to the same grounds and scenery that slaves and slave-owners once gazed, touched and walked through. Though cameras were not as ubiquitous in the antebellum South as they are today, the images that Salmon captures — trees, shacks, columns, lakes — look not too dissimilar now as they did then.

In a recent exhibition, titled “We Have Made These Lands What They Are: The Architecture of Slavery,” Salmon paired her photographs of these structures — the “architecture of slavery” — with primary sources from the era: clippings from slaveowners trying to locate escaped slaves, bills describing the physical features of slaves for sale, and diaries and writings from slaves and former slaves themselves. The juxtaposition — of placid, sometimes decrepit architecture and buoyant wildlife with these primary texts — is arresting.

Salmon, who is speaking next week as part of a show at the Original Thinkers festival in Telluride, spoke with Salon about her path to becoming an artist and what inspired her latest exhibition. This interview has been condensed and edited.

For your “Architecture Of Slavery” exhibition, you mentioned doing a lot of research, looking through primary sources like slave auction records and interviews. Can you tell us more about some of the historical accounts you dug up? What were the most interesting or unexpected?

Besides the countless runaway posters and price lists for humans that I came across, there were two accounts, both written by women, that opened up for me how nuanced the institution of slavery could be. One, called “The Mistress of Evergreen Plantation,” was a collection of letters that Rachel O’Connor wrote over her lifetime as the sole owner of a sugar plantation in Louisiana. This woman deeply cared for her many slaves as humans and wrote about her overwhelming compassion for them, her conundrum of being an outcast in the community, and worrying that her own children when she died wouldn’t care for their enslaved people as she did.

The other book is the diary account of the famous 19th-century English actress and abolitionist Fanny Kemble. She married a wealthy Philadelphia landowner who took her to visit the family farm on a rice swamp in Georgia called Butler Plantation. What she witnessed there was beyond her imagination, and she documented life on this place with a mixture of repulsion and compassion. It was through these two women that I was able to collect voices of enslaved people, which are much harder to find in historical societies. And it was through these women that I was able to tap into the feelings of love and conflict that some during that time possessed.

In a review in ArtsATL magazine of your work “We Have Made These Lands What They Are,” Malcolm Tariq wrote: “Salmon effectively subverts the notion that plantations represent an era of the past. As the title suggests, the social formalities of plantation life are still deeply embedded in the contemporary moment.” Assuming you agree with that assessment, how would you explain that idea embedded in your work?

The subtitle is “The Architecture of Slavery.” And the point I want to make here is that slavery, our original evil, is the architectural foundation for our modern American economy — our contemporary fractured racist society, and all the laws and roadblocks that came along in between, including Jim Crow, The Great Migration, redlining in housing, the Civil Rights Movement, drug laws, mass incarceration, the erosion of voting rights, and our current immigration policy to name a few.

What’s your own background as an artist?

I’ve spent my life mostly as a journalist, but I’ve always had some strong pull to looking at art and making it myself. When I left my job with NBC News in 2007, I did some textile design, but it was really this visit that I took to Tennessee with my then-partner, now-husband, where I had a kind of chrysalis moment — when we pulled into the gates of Wessyngton Plantation, and I knew my inner-artist was about to have her big debut.

Did you have family that were slaves in the Antebellum South?

There is a connection to slavery in Georgia on my mother’s side of the family. My grandmother on that side is 102 and until very recently was an able story-teller. She has no stories of slavery — she was born in 1916, her mother in 1900 — but many about the struggles afterwards.

I do have several hand-stitched quilts that I’m told were made by my enslaved ancestors.

The juxtaposition in some of your art is very jarring. I’m thinking particularly of “Cargo,” which depicts a bird about to take flight above a description of some escaped slaves. How do you go about picking what primary sources and images to combine?

Sometimes I find the text first. And sometimes I find the place first. Most of the time it’s not even that carefully thought out, and somehow the two come together and just work. The words are always associated with the planation or slave dwelling they are paired with, but never are the words literal to the image. The words become almost a kind of poetry.

With CARGO, I loved the juxtaposition of the heron about to take off freely in plain view of the humans who were imprisoned there. And it seemed to make sense to contrast it with the text from a runaway plea.

One thing I find striking about your work is how you show how bureaucracy is used to oppress. The entire institution of slavery in the US required immense bureaucratic fine-tuning and record keeping.

After two days of watching and hearing the shameful Dr. Ford–Brett Kavanaugh hearings, I can only see our current regime here in the United States as an oppressive machine geared towards regulating the masses, especially women and people of color, by eroding their rights, privileges and basic human needs and stripping them of their dignity. All through the law.

At Original Thinkers you’re speaking on a panel called “Remember Us Please,” about images, especially photography, and how they record or distort history. You’re a photographer yourself, so I’m wondering what you might have to say about photography. Are photographs a form of truth?

I think photographs are definitely a form of truth. I’m an Instagram freak, mostly because I love it as a keeper of my record, of my life. It’s my diary, it’s my truth. I love flipping through it just to reflect on what it is I’ve done with my life.

[B]ut in general, yes, photography is a wonderful truth-teller. Frederick Douglass became obsessed with photography when it was a new technology. After emancipation he thought the medium of photography would be the agent of radical social change. He thought it would remake the American imagination if the world could see black people as dignified human beings with social lives and families living in vibrant communities. He spent a lot of time thinking and speaking publicly about this. I’m not sure how his ideology worked out in the long run — methinks not so well — but through it all he became one of the most widely photographed people of his time.

Keris Salmon, along with Jane Rule Burdine, will be speaking at the Original Thinkers festival in Telluride, which runs from October 4–7.