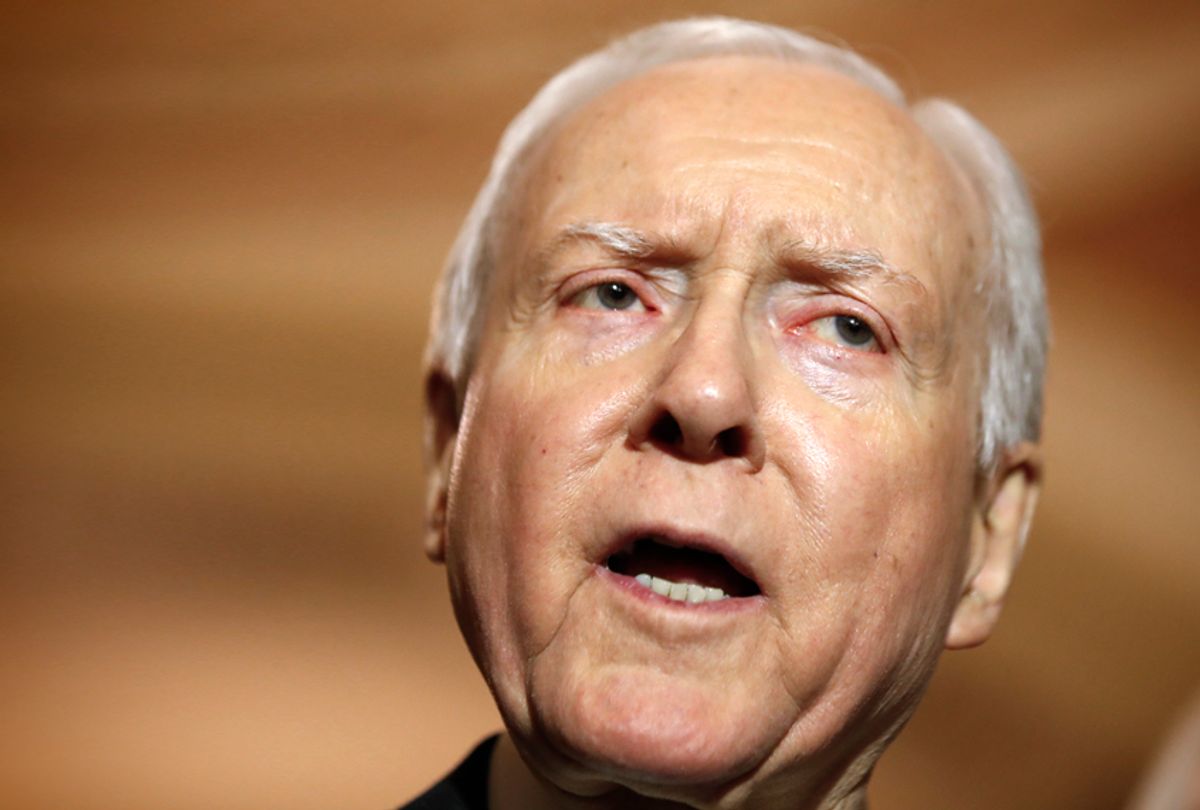 Sen. Orrin Hatch, R-Utah, is under fire for a Twitter post that seemed to slut-shame one of the women who has accused Judge Brett Kavanaugh, President Donald Trump's pick to serve on the Supreme Court, of sexually inappropriate behavior.

The controversy arose after Hatch posted a link to a four-page letter received by the Senate Judiciary Committee by a former congressional candidate named Dennis Ketterer. In his tweet, Hatch claimed that "a Utah man named Dennis Ketterer reached out to the Hatch office this week with information about accuser Julie Swetnick, and her allegations against Judge Kavanaugh."

Ketterer's letter describes meeting Julie Swetnick, a woman who claims that she witnessed Kavanaugh "drink excessively and engage in highly inappropriate conduct" such as "fondling and grabbing of girls without their consent," "not taking 'No' for an answer" and being among the "boys lined up outside rooms at many of these parties waiting for their 'turn' with a girl inside the room." Swetnick has not claimed to have been personally violated by Kavanaugh, but was adamant in her affidavit that she witnessed those events happen.

According to Ketterer, during the 1990s Swetnick approached him at a bar and tried to hit on him, but he turned her down when he realized that she was into having group sex. He claimed that he initially thought she might be a "high end call girl," described her as "very sexually aggressive with me" and insists that she never mentioned any past involving being a victim of sexual misconduct. He also recalled a conversation with her father in which he learned that Swetnick was suffering from unspecified psychological issues.

Michael Avenatti, who works as Swetnick's lawyer, denounced the letter once it was published.

The Alliance for a Better Utah also denounced Hatch, saying in a prepared statement by communications director Katie Matheson that "sharing salacious details about Swetnick’s personal life on Twitter is a blatant ‘slut-shaming’ attempt to discredit her character in the court of public opinion. We would hope Hatch would be more concerned with getting at the truth than with discrediting women accusing Kavanaugh of sexual misconduct," according to the Salt Lake City Tribune.

In addition, Hatch wrote an editorial that was published in The Wall Street Journal on Wednesday, one that characterized the criticism of Kavanaugh's responses as being in themselves motivated more by partisanship than concern for the integrity of the court.

That Judge Kavanaugh had the temerity to defend himself vigorously is now being counted as a strike against him. Over and over we hear him described as “angry,” “belligerent” or “partisan,” followed by the claim that his conduct at the hearing shows that he lacks a judicial temperament. Even “Saturday Night Live” got in on the action.

Before he was nominated to serve on the Supreme Court by President Donald Trump, Judge Brett Kavanaugh famously said that "the Supreme Court must never be viewed as a partisan institution." As more and more critics turn against him for his partisan denunciation of Democrats during the Senate hearing last week, they find themselves agreeing with his earlier statement — and using it against him now.

Most notable among these is a letter signed by over 900 law professors which draws attention to the ominous implications of Kavanaugh's language, which seemed to vow that Democrats would be punished by him if he was appointed for drawing attention to sexual assault accusations against him.

The question at issue was of course painful for anyone. But Judge Kavanaugh exhibited a lack of commitment to judicious inquiry. Instead of being open to the necessary search for accuracy, Judge Kavanaugh was repeatedly aggressive with questioners. Even in his prepared remarks, Judge Kavanaugh located the hearing as a partisan question, referring to it as “a calculated and orchestrated political hit,” rather than acknowledging the need for the Senate, faced with new information, to try to understand what had transpired. Instead of trying to sort out with reason and care the allegations that were raised, Judge Kavanaugh responded in an intemperate, inflammatory, and partial manner, as he interrupted and, at times, was discourteous to questioners.

Hatch has also faced considerable criticism for his own behavior during the Kavanaugh hearing, when he was heard praising Kavanaugh's most prominent accuser, Dr. Christine Blasey Ford, for being "an attractive person."

Another attack on a woman accusing Kavanaugh came from Senate Judiciary Committee Chairman Chuck Grassley, who demanded that Ford's attorneys turn over information relevant to a claim by one of her ex-boyfriends that she had helped coach one of her friends, Monica McLean, on how to use a polygraph test, according to Fox News. Because Ford had testified that she had never helped anyone beat a polygraph test, this could have been a damning revelation. But on Wednesday, McLean came forward to deny that the accusation has any merit.