Sen. Ben Sasse (R-Neb.) publicly suggested he would have preferred a woman to be nominated to the court instead 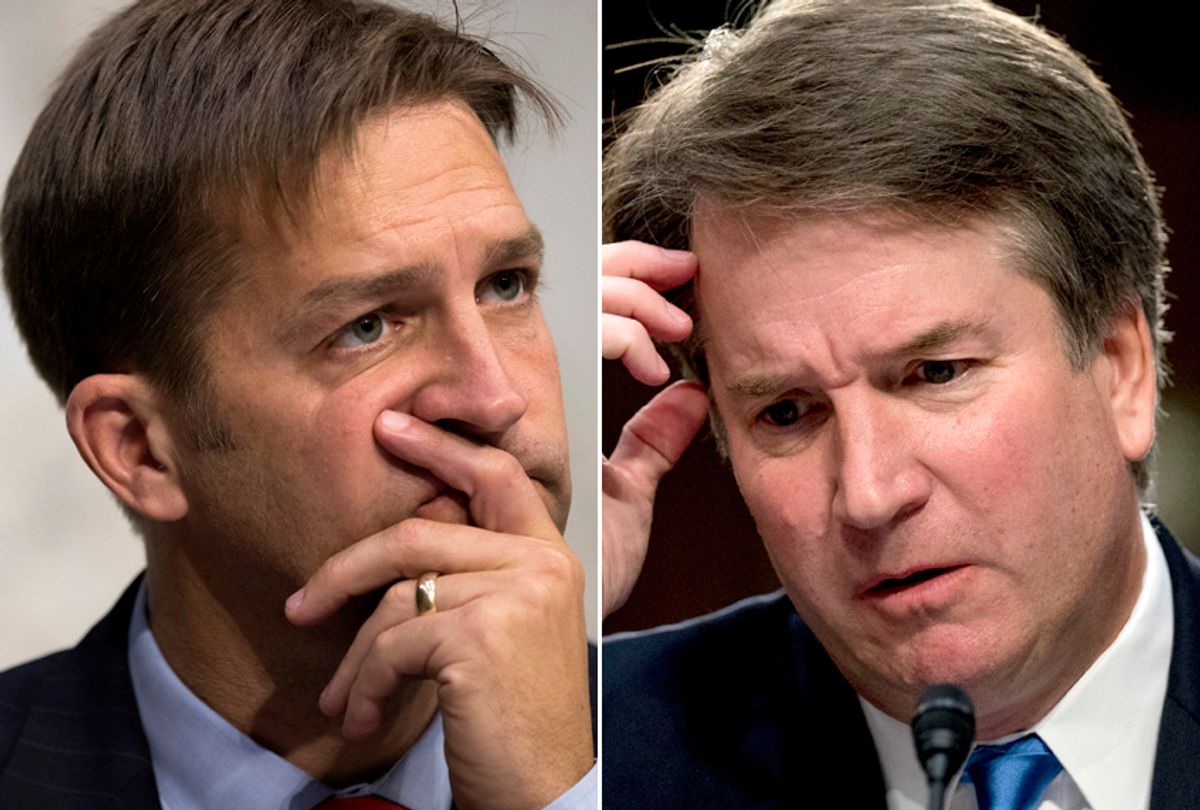 Sen. Ben Sasse (R-Neb.) could have further complicated Brett Kavanaugh's confirmation prospects when he publicly suggested he would have preferred a woman to be nominated to the Supreme Court in his stead.

"Although I've said many complimentary things about Judge Brett Kavanaugh and his distinguished record . . . I will say that I urged the president back in June and early July to make a different choice before he announced this nomination," Sasse told the Senate Wednesday night as the upper chamber of Congress prepared for the long-anticipated FBI report on Kavanaugh's past conduct.

Kavanaugh faces multiple allegations of sexual misconduct, including attempted rape. Sasse said that he had "urged the president to nominate a woman," claiming he had foreseen potential complications such as the one with Kavanaugh. "Part of my argument then was that the very important 'Me Too' movement was also very new, and that this Senate is not at all well prepared to handle potential allegations of sexual harassment and assault," Sasse said in his speech.

The Nebraskan senator felt that Trump picking a woman – he was most likely referring to Amy Coney Barret or Joan Larsen, both of whom are circuit court judges that appeared on Trump's Supreme Court shortlist – would have been the politically smart move. "In the interest of cautious prudence I urged a different path than the one that was chosen," Sasse remarked.

While Sasse framed his arguments as a reflection on what Trump should have done in the past rather than what Sasse would do in the future, his remarks nevertheless marked a startling breach from partisan unity at a time when the Republican Party cannot spare votes in order for Kavanaugh to be confirmed. With Republicans clinging to a 51-49 lead in the Senate — a position somewhat buttressed by having the ability for Vice President Mike Pence to cast a tie-breaking vote if necessary — they can only spare two senators.

Moreover, Sasse chastised Trump for mocking Dr. Christine Blasey Ford, who accused his Supreme Court nominee of attempted rape in the 1980s. "We all know that the president cannot lead us through this time," he said. "We know that he's dispositionally unable to restrain his impulse to divide us."

The three Republican senators who have widely been considered to be possible defectors are Lisa Murkowski of Alaska, Jeff Flake of Arizona and Susan Collins of Maine. All three joined Sasse in condemning the president's mockery of Ford. On the Democratic side, the two senators seen as most likely to support Kavanaugh are Heidi Heitkamp of North Dakota and Joe Manchin of West Virginia.

The motives for the different senators in terms of potentially defecting vary wildly. Collins and Murkowski are generally regarded as moderates who are sensitive to women's issues, while Flake and Sasse have been willing to part ways with Trump on a number of issues. Meanwhile, Heitkamp and Manchin are running for reelection in states that voted heavily for Trump in 2016.

Regardless of these complications, Senate Republicans have been determined to push through Kavanaugh's confirmation before midterm elections in five weeks, as they risk losing control of that legislative chamber. Senate Majority Leader Mitch McConnell filed a motion for a cloture vote on Kavanaugh's nomination Wednesday, which means the first vote could occur as early as Friday and a full Senate vote could occur as early as Saturday, according to CBS News. A strong indicator that Senate Republican leadership was determined to confirm Kavanaugh regardless of what that report discovers about his background is the fact that the FBI report had not been read by the senators when McConnell filed for a cloture vote.

Democrats have expressed outrage at what they perceive as Republican attempts to misrepresent the contents of the FBI's background report, which has since then been provided to senators. The Republican senators' Twitter account announced that "nowhere in any of these six FBI reports ... was there ever a whiff of ANY issue ― at all ― related in any way to inappropriate sexual behavior or alcohol abuse."

In response, eight of the ten Democrats on the Senate Judiciary Committee wrote a letter to Senate Judiciary Chairman Chuck Grassley claiming that, "while we are limited in what we can say about this background investigation in a public setting, we are compelled to state for the record that there is information in the second post that is not accurate. It is troubling that the Committee Majority has characterized the information from Judge Kavanaugh’s confidential background investigation on Twitter, as that information is confidential and not subject to public release."