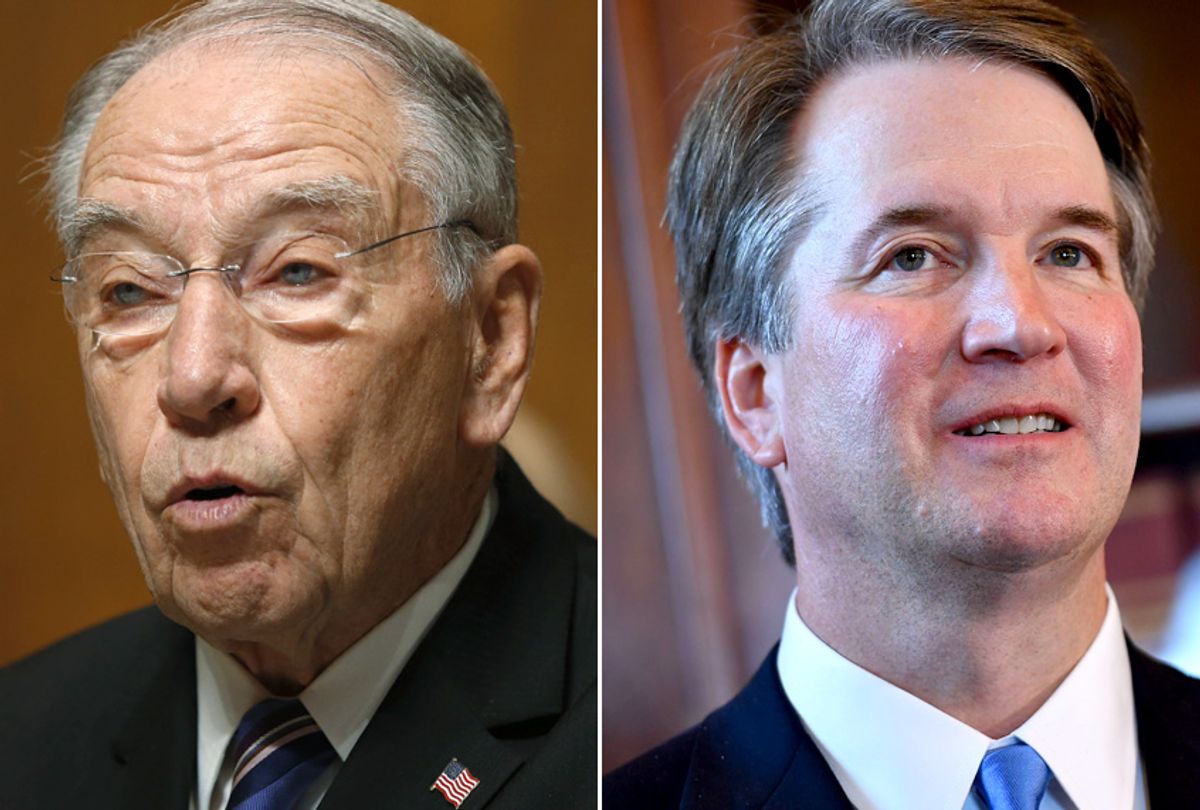 Although the American public won't get to see the FBI report detailing the sexual misconduct accusations against Supreme Court nominee Brett Kavanaugh, Senate Judiciary Chairman Chuck Grassley wants voters to believe that it has exonerated the controversial candidate — but Democrats want voters to believe that Grassley and his fellow Senate Republicans are lying about past reports regarding Kavanaugh's background.

"There's nothing in it we didn't already know," Grassley wrote in his statement on Thursday about the most recent FBI report on Kavanaugh. "These uncorroborated accusations have been unequivocally and repeatedly rejected by Judge Kavanaugh, and neither the Judiciary Committee nor the FBI could locate any third parties who can attest to any of the allegations. There's also no contemporaneous evidence. This investigation found no hint of misconduct and the same is true of the six prior FBI background investigations conducted during Judge Kavanaugh's 25 years of public service."

After praising Kavanaugh's reputation as a judge and claiming that the FBI did a thorough and nonpartisan job looking into the accusations against the Supreme Court contender, Grassley concluded by characterizing the criticisms of the judge as being partisan in nature.

"Fundamentally, we senators ought to wipe away the muck from all the mudslinging and politics and look at this nomination with clear eyes," Grassley wrote. "Judge Kavanaugh is one of the most qualified nominees to ever come before the Senate. He's served with distinction for twelve years on the nation's most important circuit court and dedicated himself to serving the American public. We know that he will be an excellent justice because he's been an excellent judge."

Democratic Senate leadership pushed back against Grassley on Thursday.

"I just have three points to make," Senate Minority Leader Chuck Schumer told reporters on Thursday. "One: We had many fears that this was a very limited process that would constrain the FBI from getting all the facts. Having received a thorough briefing on the documents, those fears have been realized. Second: I disagree, having received this briefing on all of the documents, I disagree with Sen. Grassley's statement that there was no hint of misconduct. And third: We are reiterating our call, given how limited these documents were and how limited the scope of this investigation was, we are reiterating our call that the documents with proper redaction be made public."

He added, "Why shouldn't all of America see the facts? And second, we are reiterating our call to make the directive that the White House and counsel McGahn sent to the FBI public because we believe it greatly constrained the investigation from the get-go."

Grassley's Thursday statement echoed a pair of tweets sent out by Republicans on the Senate Judiciary Committee on Tuesday.

"As part of Judge Kavanaugh’s nomination to #SCOTUS, the FBI conducted its SIXTH full-field background investigation of Judge Kavanaugh since 1993. As part of these 6 prior FBI investigations, the FBI interviewed nearly 150 different people who know Judge Kavanaugh personally," read the first tweet. The second added, "Nowhere in any of these six FBI reports, which the committee has reviewed on a bipartisan basis, was there ever a whiff of ANY issue – at all – related in any way to inappropriate sexual behavior or alcohol abuse."

Democrats reacted with dismay to the tweets, arguing that they mischaracterize what the FBI has previously found about Kavanaugh and that they aren't allowed to correct the record because much of that information is classified.

"While we are limited in what we can say about this background investigation in a public setting, we are compelled to state for the record that there is information in the second post that is not accurate. It is troubling that the Committee Majority has characterized the information from Judge Kavanaugh’s confidential background investigation on Twitter, as that information is confidential and not subject to public release," eight of the ten Democrats on the Senate Judiciary Committee wrote in a statement, according to HuffPost.