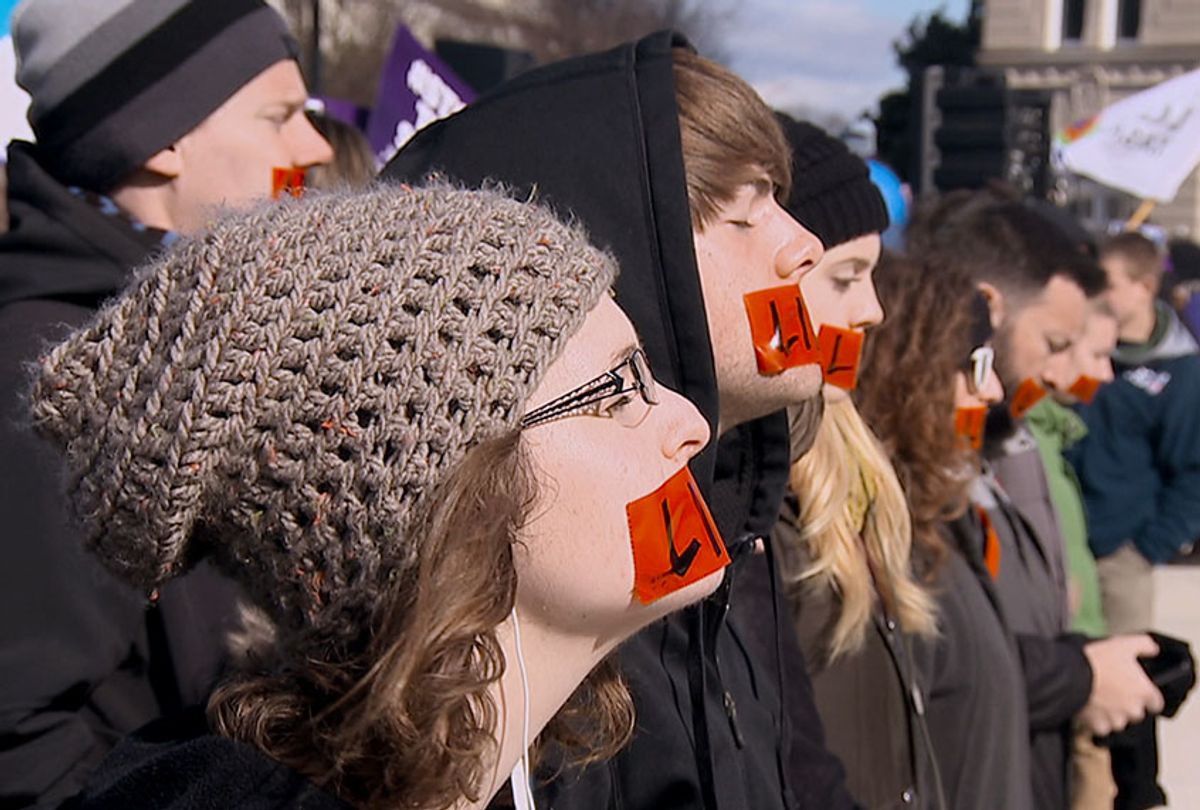 Abortion has been a central topic in the confirmation process for Brett Kavanaugh, President Donald Trump's Supreme Court nominee. In fact, the debate has been so forceful and contentious that many conservatives have framed the sexual assault allegations against Kavanaugh as a result of the vulnerability of Roe v. Wade, the Supreme Court's landmark decision that legalized abortion in 1973 — a decision that many in the religious right hope will be reversed.

Over the course of the last decade, women in many parts of the country have seen their rights and access to abortions shrink. A new Netflix documentary, "Reversing Roe," helps explain why.

Filmmakers Annie Sundberg and Ricki Stern explore the abortion debate before and after Roe v. Wade passed. "Reversing Roe" illuminates the history and ideologies at the center of both the pro-life and pro-choice movements, as well as what's at stake if Kavanaugh advances to the high court and Roe v. Wade, is in fact, overturned.

"Reversing Roe" tells the story of abortion in this country after Roe v. Wade and how it moved from a religious issue to a political one. Why were you both interested in this story and telling it in this way?

Ricki Stern: ​Annie and I had been talking about doing a film that was maybe more of a historical look of reproductive rights in America. But it was right after the election that we stopped and said, "How have we gotten to a place that the issue of abortion has become so politicized, that it is so influential in presidential elections? How did it move from a health care or medical issue to become this political wedge?" That was really the impetus for us. We specifically wrestled with how to tell the story, but we ended up looking at the Roe v. Wade decision as the prism.

The focus is what America was like when abortion was illegal, before the Roe v. Wade decision, because of course women were having abortions. And then, how did that change for people on the ground and how ultimately was it used for political gain and became this very partisan wedge, with the pro-life party being the Republican Party and the pro-choice party being the Democratic Party.

It's so interesting you say you started the film after the presidential election, because it almost feels like that you started it after Justice Anthony Kennedy's retirement announcement. It's so current. Was there an interest in releasing it before Judge Kavanaugh's confirmation process?

Annie Sundberg:​ I'll say that it was interesting for us because we basically were finishing the film, and we'd had a live cut when we got the news of the Kennedy retirement. We made a decision to open the film back up and address this next stage in the evolution of the Supreme Court.

We wanted it to be part of a national conversation. Especially as the focus around the Kavanaugh hearings has pushed on the issue of access to abortion in America and his potential judicial take on that.

One thing that was really fascinating to me was how you explored that as the abortion fight has raged on, nearly every Republican elected president since Ronald Reagan has flipped on the issue, from being pro-choice to pro-life. How did declaring an anti-abortion stance become a non-negotiable issue for Republicans?

Stern:​ I think first of all, that was surprising for us ,to see the archival material where you had someone like a George Herbert Walker Bush say emphatically that he didn't want to support an amendment to the Constitution that would overturn the Roe v. Wade decision, and that he supported that decision. Then to do a full 180 and say that he would support cases that would be looking to overturn the Roe v. Wade decision.

So that was surprising to hear, in no uncertain terms, from the people who were presidential candidates. I think ultimately that's the story in the film, is that you see the political strategists look at wanting to strengthen their party — the Republican Party — and look for what ultimately became an issue that can be galvanizing for religious voters, which was this abortion issue.

It's deeper than that, which you see in the film, there was a frustration after civil rights and Brown v. Board of Education, that the answer to desegregating schools was to have these established white academies. These religious white academies were under threat of losing their tax exemption.

​There was a disgruntled evangelical leadership that these political strategists looked at and said, "This is really an untapped group of people that really, traditionally haven't been voting, haven't been a big voting bloc, that we can tap into. But we can't come right out and say that this is because of these racially divisive laws." And they used abortion as a way to galvanize those religious voters.

Sundberg:​ When you talk about when did it become so politically effective, or when did it become such a mandated part of a Republican position, the first presidential race where both political parties without the official planks on abortion as an issue was 1976. It was sort of an unexpected challenge for pro-choice Republicans at the time. There was an actual pro-choice majority in the Republican Party at that point. It was interesting, because you look at the evolution of language in the party platforms with every successive presidential election, and it has become more and more pointed, more and more front and center. It really just shows the evolution of what's at stake for people who want to get the Republican nomination.

Stern: I mean, you even see it in the presidents talking about who they will nominate to the Supreme Court. It used to be constitutionalists, federalist judges, and candidate Trump at the time was the first presidential candidate who actually used the term "pro-life justices." That was a very welcome, very overt, clear message to pro-life voters that he was going to take it seriously and he would put into place pro-life justices who would, as he said during the election, rule to overturn Roe v. Wade.

The footage that really struck me is after Wendy Davis' filibuster, that scene in Texas where the male politician is just speaking so callously about what women should do with their bodies, and positioning it as a concern for women, as women are literally screaming in the building, protesting for the right to determine their own lives. It was chilling.

Stern: ​It's not unlike what we just witnessed with the Kavanaugh hearings.

Right, it certainly recalled that moment when Democratic Sen. Kamala Harris asked Kavanaugh if he could name one law that allows the government to make decisions about a man's body. Gloria Steinem and others in the film say they believe that pro-choice is about equality and that the pro-life movement is about wanting to control women. Do you think that's a conscious idea for pro-lifers? Or are the pro-lifers who frame the movement as about concern for women's safety genuine in their beliefs?

Stern: ​I think what the film points out is that the Republican Party was the party of freedom. It was the party of personal autonomy and personal freedom and small government. I think some now would look at that and say, "Is there hypocrisy in the Republican Party putting forth laws and supporting regulations and restrictions that restrict women's access to a medical procedure that impacts their bodily autonomy? I think that was interesting for us, too.

Sundberg:​ Well, I mean if you talk to people on both sides, they will be critical of the other, because it is such a divisive issue. But I think a lot of people who feel that women should have access to full care and that they should be able to make their own decisions, feel that there's been a lot of misinformation that has come out of the pro-life side.

I think there's a sense that people on the pro-life side — there are people who work in grassroots, often religious-based, community-based, they're often called crisis pregnancy centers, that are working to dissuade women from choosing abortion. They will often provide certain kinds of services up to a certain period of time over the course of a woman's pregnancy. But they’re certainly not offering job training or job support or things to get a young woman on her feet, if she is in a place where she wasn't financially prepared to bring a child into the world.

What we see a lot, in terms of the how the religion works, in particular in states where you have heavily religious activist groups, it becomes a very effective voting mechanism. What we uncovered in our film, when we spoke with groups that do a lot of lobbying, is that  do some of what people on the more progressive side do. They do a list of "How well are your candidates acting on the issue?" The issue that matters to them is the issue of life. Some people might say "How are people doing on climate?" They basically have a series of rewards and punishments that they deliver via the ballot box, and a fair amount of money that they can put behind you or take away from you, if you were running for elected office.

The justices asked the question: Doesn't there have to be a correlation between the burden and the benefit, and if we're really benefiting women by requiring these centers to be surgical care centers, is that really necessary? When you look at the safety of first-term abortions versus the safety of colonoscopy and other kinds of procedures, like liposuction, we're not requiring the same kinds of restrictions on those clinics. Why is this just about abortion? ​I think exposing some of the double standards is important.

In the film, you really show how restricted abortions have become in the last decade, especially in Southern states. There's a quote at the end where the doctor says, "It doesn't even matter if the rule is on the books if people can't have access and clinics can't stay open." What more is at stake right now? Could women be vulnerable again to these back alley abortions?

Stern: ​I think that Annie and I would both say yes. I think you already have women who have to travel hundreds of miles to have access to an abortion provider, who in some states have to wait 72 hours from the time they have a sonogram to actually get the procedure. That has become so prohibitive to these women, because maybe they already have children and they've got to take time off from work or they can't afford to travel that distance. They're already either having children that they don't feel that they can take care of or they are going in and trying to self-abort. We are definitely going to see it.

We've always had abortions and it's really just that in making them illegal we're going to see the same things that we saw when abortion was illegal in America before 1973.

Sundberg: ​I think a lot of people feel at this point that maybe Roe does not ultimately get overturned per se, but that if you have a more conservative court that will start to look at decisions like the ones we're seeing advancing in the federal courts right now, it's going to be a different sense of perspective. I think that the undue burden test that was looked at very closely in Whole Women Health v. Hellerstedt may be read in an entirely different way, which may allow some more draconian restrictions to stand, moving forward.