"Venom" isn't trying to be great, which is good! But without Hardy's performance, the messy script would sink it 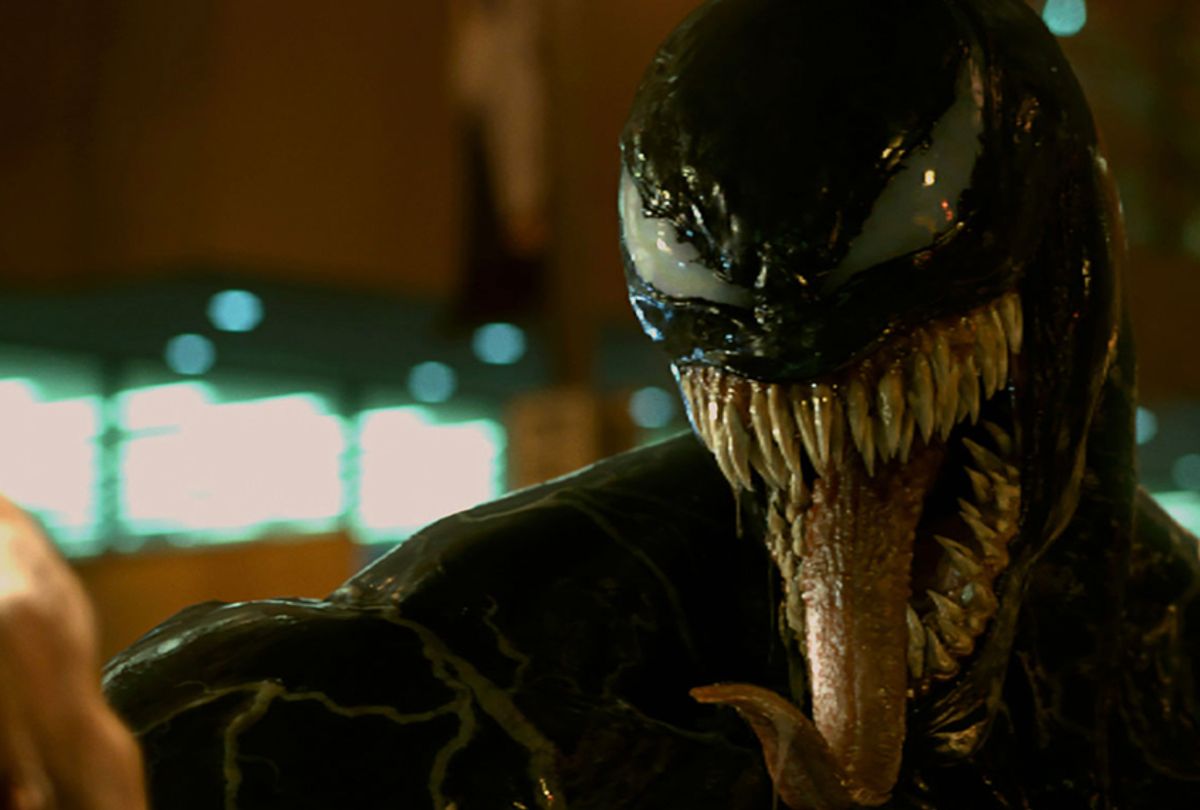 Call me crazy — certainly I'm in a minority when it comes to my fellow critics — but I liked "Venom." Hell, if it wasn't for the sloppy and formulaic script, I might have even loved it. At a time when every superhero film tries to (a) serve as either the springboard for or the continuation of a cinematic universe, (b) bog itself down in ponderous self-importance a la "The Dark Knight" or (c) do both of those things, it is refreshing to watch a movie that tells a self-contained story — fully aware of the fact that by virtue of its genre it is going to be braindead and cheesy — and as a result is just plain fun.

Indeed, if "Venom" wasn't based on an iconic superhero character (the antihero Venom, who was first seen on the big screen in "Spider-Man 3"), it could pass for a legitimate body horror action comedy. It tells the story of Eddie Brock (Tom Hardy), an ambitious reporter who inadvertently destroys both his career and his romantic relationship with Anne Weying (Michelle Williams) when he hacks into his significant other's computer so he can confront an Elon Musk-esque billionaire, Carlton Drake (Riz Ahmed), about his various shady business deals. Six months later, Brock is a loser barely able to keep his life together, and that is how he would have remained had not one of Drake's employees (Jenny Slate) found him to explain that his suspicions about Drake were correct all along. This prompts Brock to break into Drake's super-secret science lab and, as these things often go, the whole situation ends with Brock being infected by an alien symbiote named Venom who gives him superpowers while communicating with him in his head.

This isn't quite the standard cinematic template for the superhero genre, although one could be forgiven for thinking that given the plot description. The Venom/Brock hybrid isn't exactly a hero; for most of the film's running time, they're focused primarily on self-preservation, and it isn't until Venom realizes that he is also a loser like Brock that they team up to save the planet in the name of naked self-interest.

That said, the fact that "Venom" tries to liven up the superhero formula by making the titular character into an antihero doesn't automatically mean that the movie works. Like all genre pictures, "Venom" lives or dies by the execution of its standard parts rather than by its originality. While in this regard the movie is hardly perfect, it has more good elements than bad.

Foremost among these positive variables is Hardy's performance. As Brock, he is appropriately swaggering when at the top of the world with his career, self-pitying when his life has been seemingly destroyed and utterly terrified when he realizes that he has been turned into a literal monster. As Venom, he is convincingly menacing, with the special effects reinforcing the ominous grumble of his voice and weight of his words so the audience never believes the extraterrestrial's mouth is writing checks that his body can't cash. And the body horror elements of the movie are gruesome enough that they leave an impression even after the end credits have started rolling.

"Venom" also benefits from a script that, in a welcome change of pace, tries to be nothing more than an entertaining movie on its own terms. When a superhero movie tries too hard to start its own cinematic universe, plot elements are included not because they serve the narrative itself or bring joy to the audience but because they can lay the groundwork for some future installment. Similarly, when a superhero movie tries to ape the profundity of "The Dark Knight" even when it's clearly out of its depth, the final result is a motion picture that tries so hard to be great that it never figures out how to be good.

The last time superhero movies regularly avoided both of those pitfalls was in the pre-2008 era (before not only "The Dark Knight" but the first entry in the Marvel Cinematic Universe, "Iron Man"), and appropriately "Venom" feels like the kind of superhero flick that could have been made in the '90s or '00s. Its main shortcoming is that, unlike the best films in the genre from that era (most notably "Spider-Man 2"), it doesn't have a strong script to prop up the rest of the proceedings. Every character except for Venom/Brock is completely forgettable, the story is generic at best and quite messy at worst and the climactic battle scenes have foregone conclusions.

Yet because Hardy is so much wicked fun in the title role — chomping up villains with gusto, arguing with himself as both Brock and Venom in ways that are witty, charming and at times downright intriguing — these shortcomings hardly become deal-breakers. "Venom" may not be nominated for Oscars anytime soon (a distinction that everyone seems to be preparing for its main competition this weekend, "A Star Is Born"), but it certainly deserves to be ranked above other failed one-off superhero movies from the post-2008 era. (Looking at you, 2011's "The Green Lantern" and "Fantastic Four" from 2015).

This is the part where I must make a comparison to the only other live action blockbuster to feature the Venom character, "Spider-Man 3." That movie had many shortcomings (although it also had more assets than many of its detractors admit, particularly in the characters of Harry Osborn and Sandman), and the way it depicted Venom was no doubt the worst among them. While Topher Grace did the best he could with the material provided to him, he simply didn't come across as particularly frightening, tormented or interesting; he was just a whiny wannabe journalist who stumbled into great superpowers after the more well-developed character, Tobey Maguire's Spider-Man/Peter Parker, willfully forfeited them.

That version of Venom wasn't worthy of the big screen. This one is, and I hope the tidal wave that will be "A Star Is Born" doesn't overwhelm it at the box office.