Did Democrats do enough to stop Kavanaugh? Not even close, and don't expect more from a "blue wave"

Yes, Democrats are preferable to this. But they're still spineless, and they melted before Kavanaugh's white rage 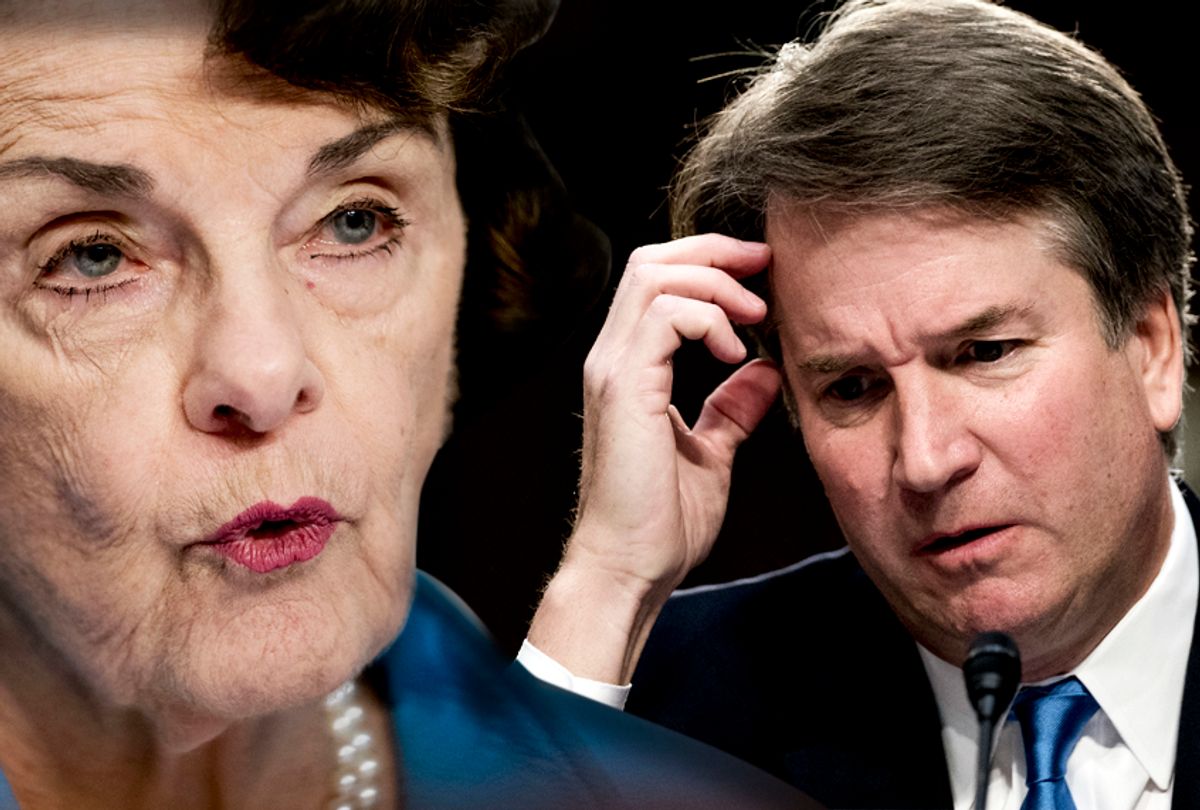 Although I’ll vote for any Democrat in November to keep Donald Trump’s Republican vassals from finishing off the American republic at his bidding, what I saw in the performance of most Democrats on the Senate Judiciary Committee last week reminded me that any victory by that terminally pusillanimous, corrupt, suppurating party, which is only a zombie if not a corpse of our democratic hopes, isn’t likely to stop what’s coming at us any more than a speed bump will stop a tank.

Again, I’ll vote for any Democrat in November, just as I voted for Hillary Clinton in 2016 even after I’d said all this about Democrats right here at that time.

What’s different now is that the danger of Trumpism and the hollowness of Democrats have been more fully exposed. While we can hope that the latter will grow spines in some upcoming congressional outcomes, it’ll take a lot more to stop the creeping coup d’état against the republic by Trump and his backers than it would have taken in 2016.

Too many Democrats are already carriers and casualties of the coup from above. When Brett Kavanaugh interrupted Sen. Amy Klobuchar to ask if she drinks too much, why didn’t she find it in herself to say, “Mr. Kavanaugh, would you please stop putting your verbal hand over my mouth while I’m asking you a question?”

Why didn’t Sen. Sheldon Whitehouse look up from his scripted questions about a high school beach party and yearbook to ask Kavanaugh whether he truly thought that the committee’s inquiry was staged by the Clintons in revenge for Trump’s victory and, if so, would he mind telling the American people more about that conspiracy?

Why didn’t the “ranking member” of the minority, Sen. Dianne Feinstein, observe that Kavanaugh’s tirade had given the committee and the American people ample evidence of his judicial temperament?

Instead, these and most other Democrats cowered before Kavanaugh’s rain-dancing. He said what he’d scripted himself to say the night before, but some of his anger and partisan hatred also came roaring out of his bowels in ways that should have roused tribunes of the people to commanding, eloquent, show-stopping pushbacks.

The truth is that they’d been hollowed out by their own compromises since at least the mid-1970s, when the follies of neoliberal – yes, Clintonite – Democrats did quite as much to widen the civic and political vacuum into which Trump has swept as did the follies of conservatives. It’s an argument I’ve been making since 2014, long before any of us thought that Trump would run for president, much less win.

It’s also certainly true that conservatives have dined out on liberals’ mistakes for so long that they’ve forgotten how to cook for themselves and have abandoned their kitchen to Trump. But Chuck Schumer, the Democratic senator from Wall Street, and Barney Frank, the representative from Fanny Mae, and the “welfare reform” president Bill Clinton, and Walmart board member Hillary Clinton, and even the civic magician named Barack Obama did far too much to seed the field from which Trump’s dispossessed, insulted, enraged mobs have sprouted.

The New Yorker’s Adam Gopnik denies views like mine, which he calls “the orthodoxy of this moment that Trump is not the ‘cause’ of all his catastrophes.” Gopnik urges instead that only “Trump is the cause of Trumpism. … This is Trump, and Trump alone, degrading American politics, and we should not get lost in side debates and sideshows.” He likens Trump to a magician who keeps so many tricks going at once that he diverts us from noticing the big, dark, authoritarian, plutocratic advances behind the trickery.

Begging your pardon, Adam, and with all due respect for your marvelous writing: Your facility with metaphors may be tricking you and your readers. Blaming so much on Trump the magician reminds me sadly of the critic Robert Warshow’s observation in 1947 that "The New Yorker has always dealt with experience not by trying to understand it but by prescribing the attitude to be adopted toward it. This makes it possible to feel intelligent without thinking, and it is a way of making everything tolerable, for the assumption of a suitable attitude toward experience can give one the illusion of having dealt with it adequately. The gracelessness of capitalism becomes an entirely external phenomenon, a spectacle that one can observe without being touched -- above all, without feeling really threatened."

Trump is indeed an unprecedentedly dangerous president. But, as I argued in the Washington Monthly last week, Democrats’ obsession with youthful sexual assaults and bar fights, serious though they may have been in Kavanaugh’s case, is no more constructive than their obsession with breaking the glass ceilings of structures whose foundations and walls they fail to change. That leaves neoliberal Democrats with little to say against glass-ceiling breakers such as Carly Fiorina, Sheryl Sandberg or Margaret Thatcher.

Until and unless Democrats are forced by well organized movements to challenge the regime of casino-like financing, predatory lending and consumer-bamboozling that they’ve done so much to sustain under the falsely compensatory drapery of United Colors of Benetton “diversity,” the true and urgent claims of #MeToo and Black Lives Matter will always lose to the belligerence of the Brett Kavanaughs and the bitter resentments of the less “entitled” politically incorrect.