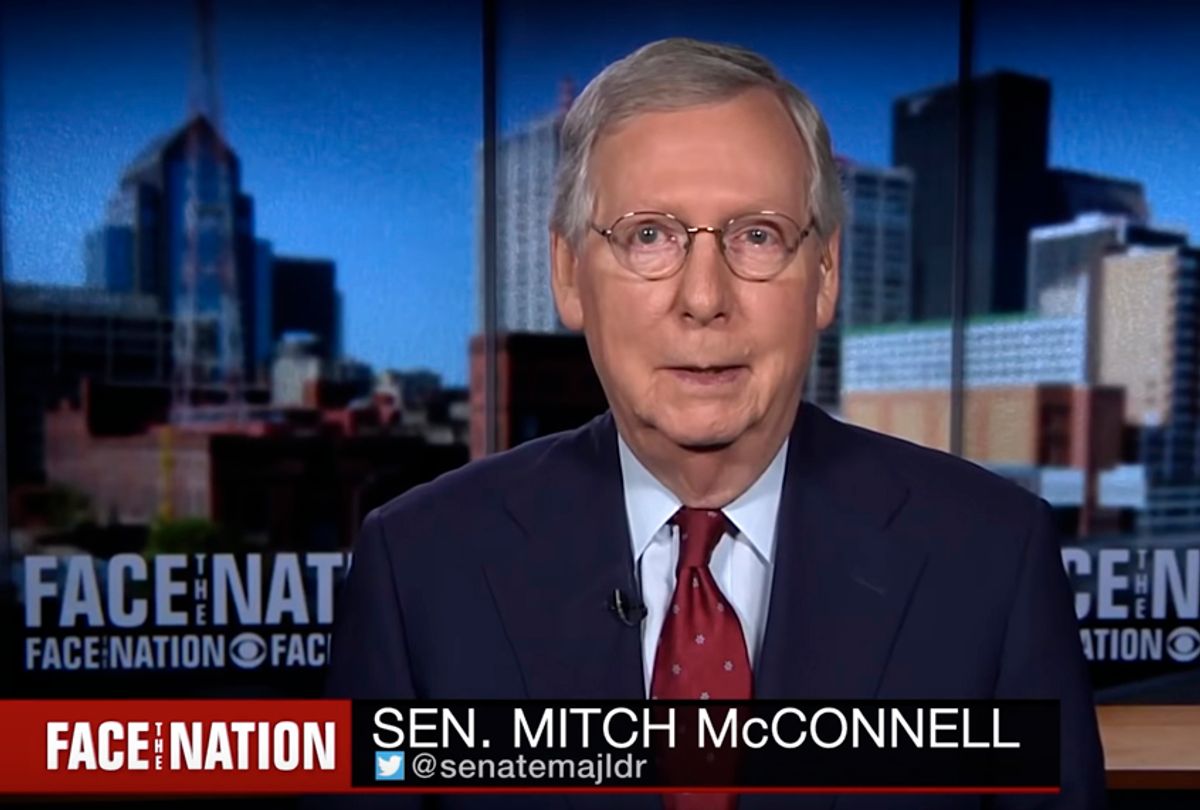 CBS News' Face the Nation host John Dickerson confronted McConnell on Sunday about his refusal to hear out Garland's nomination, claiming that the obstruction had "kicked off a new stage in the partisanship associated with Supreme Court nominees."

But McConnell continued to defend his unprecedented 2016 decision by arguing that presidential year nominations are inappropriate.

"Yeah they don't know much history," McConnell shot back. "You have to go back to 1880 to find the last time a Senate controlled by a different party from the president confirmed a Supreme Court justice to a vacancy created in the middle of a presidential election. They also conveniently forgotten that Joe Biden said in 1992 when he was chairman of the Judiciary Committee, the Democrats control the Senate, Republican in the White House. If a vacancy occurred they wouldn't fill it. They also conveniently forgot that Chuck Schumer and Harry Reid, 18 months before the end of Bush 43 said if a Supreme Court vacancy occurred they wouldn't feel it..."

But Dickerson was prepared with historical facts.

Dickerson pointed out that, "in 1956 Eisenhower nominated Brennan the- the 84th Congress was a Democrat controlled and also on the Biden rule, Joe Biden was talking in the abstract. There was no nominee, no nominee was blocked and he said to not have the nomination come up before the election, but that it could come up after the election. And so what Democrats say when they hear you doing this is they say he's creating new rules to essentially do what he wants to do. And as you've written in your book "The Long Game" when you do that, it actually hurts democracy."

(Dickerson later realized that he had made a minor factual error, which he acknowledged on Twitter.)

McConnell didn't have an easier time explaining himself to Fox's Chris Wallace on "Fox News Sunday."

Wallace followed up by asking McConnell about what he would do if a Supreme Court vacancy opened up during Trump's last year in office in 2020.

"When you blocked Merrick Garland's nomination from President Obama, you basically said that we don't do this in a presidential election year, and that we wait until the election, and then whoever the people choose, they get to pick the Supreme Court nominee. But what you just said now was, it's a question of whether or not it's the party in control of the Senate is different than the president," Wallace asked. "The question I guess I'm getting to here is, if Donald Trump were to name somebody in the final year of his first term in 2020, are you saying that you would go ahead with that nomination?"

After initially dodging the question, McConnell simply replied, "The answer to your question is, we'll see if there's a vacancy in 2020."