Collins on Christine Blasey Ford: "What I think she is mistaken about is who the perpetrator was" 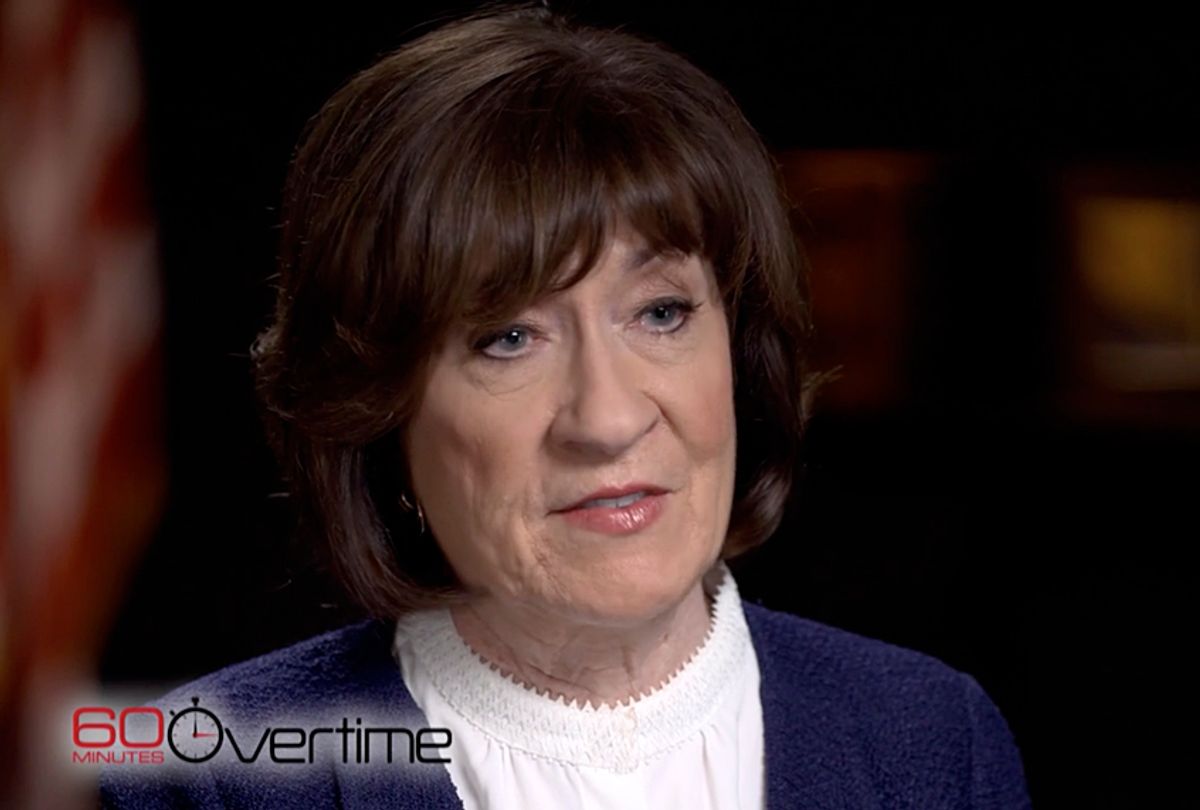 Sen. Susan Collins, the pro-choice Republican from Maine, cast one of the key swing votes in the battle to confirm Associate Justice Brett Kavanaugh to the Supreme Court despite the multiple allegations of sexual misconduct raised against the judge. During an appearance Sunday on CBS's "60 Minutes," Collins elaborated on how she arrived at her decision to confirm Kavanaugh and how she found Dr. Christine Blasey Ford, one of the judge's accusers who testified before the Senate Judiciary Committee to be credible – just not enough to convince her that Kavanaugh had indeed assaulted her 36 years ago.

"I found her very compelling. My heart went out to her, because she was clearly traumatized, and as she said, terrified," Collins said of Ford. "And right after that, I did have doubts. But, then, I felt that the judge gave a very compelling denial, and that's why it came down to me: Is there corroborating evidence?"

"I feel very comfortable that I've made the right decision," Collins added. "I could not come to another decision based on the testimony and the evidence that I reviewed."

However, the FBI investigation into Ford's allegations cited by the Maine senator, has been critiqued by many for its limited scope and fast-paced timeline of one week's time.

"I spent an enormous amount of time in the first part of the confirmation process studying the judge's 12-year record as a circuit court judge," the senator added. "I was satisfied at that point, started working on the speech and then these devastating allegations are made that sends the whole thing into a tailspin."

Collins said that, when she read the redacted letter from Ford, she questioned Kavanaugh over the phone about it. He denied the claims categorically.

"She was clearly terrified, traumatized and I believed that a sexual assault had happened to her," the senator said of Ford's testimony during the special hearing. "What I think she is mistaken about is who the perpetrator was. I do not believe her assailant was Brett Kavanaugh."

However, Ford said in sworn testimony before the Senate Judiciary Committee that she was "100 percent" certain that it was Kavanaugh who sexually assaulted her when she was 15 years old. Kavanaugh has continued to deny all of the allegations of sexual misconduct facing him.

"I would never vote for someone who had committed sexual assault or who had lied about sexual assault. That's not a hard call for me," Collins added. "I would have voted 'no' if I disbelieved Judge Kavanaugh, but given his denials and the lack of evidence that this happened, I just did not think that it was fair to ruin the life of this distinguished judge and his family over allegations that cannot be proven."

Collins said she did not try to calculate the political repercussions for her vote. "It's too important for that," she said. "I just had to do what I think is right."

Nevertheless, the backlash has been fervent. As the allegations of sexual misconduct intensified against Kavanaugh, a website popped up to collect funds for Collins' unnamed Democratic challenger in 2020 when she faces reelection. And it began before Collins ever publicly declared her vote. If she voted against Kavanaugh, the credit card pledges would not processed.

Since Collins cast her vote, the site has been updated: "For failing to stand up for the people of Maine and ignoring the voices of your constituents, and for endangering the lives of millions of Americans, we will work to elect a new senator to represent the State of Maine." To date, the fund has raised more than $3.5 million.

"This is a classic quid pro quo, as defined in our bribery laws," Collins said when asked about the site on "60 Minutes." "They are asking me to perform an official act, and if I do not do what they want, $2 million plus is going to go to my opponent. I think that, if our politics has come to the point where people are trying to buy votes and buy positions, then we are in a very sad place."

Beyond fundraising for Collins' opponent, many social media users have been trying to identify the candidate who could mount a winning campaign against her. Susan Rice, who served as the U.S. ambassador to the United Nations under former President Barack Obama, initially responded with interest.

When former Obama White House Communications Director Jen Psaki tweeted – "who wants to run for Senate in Maine? there will be an army of supporters with you" – Rice replied succinctly, "Me."

Rice's tweet quickly went viral, and less than 30 minutes later, she clarified her position. "Many thanks for the encouragement. I’m not making any announcements," she wrote. "Like so many Americans, I am deeply disappointed in Senator Collins' vote for Kavanaugh. Maine and America deserve better."

But Sunday, during a panel discussion at the New Yorker festival, Rice admitted that she had not completely ruled out the idea. She explained that she had "to do a lot more homework" before committing to the campaign, according to ABC News.

"I made the tweet. I later elaborated that this wasn’t where my head was," Rice continued. "But I have been moved by the enthusiasm. I’m going to give it due consideration after the midterms."