Despite his celebratory mood, Kavanaugh is still beset with lingering questions from his confirmation battle 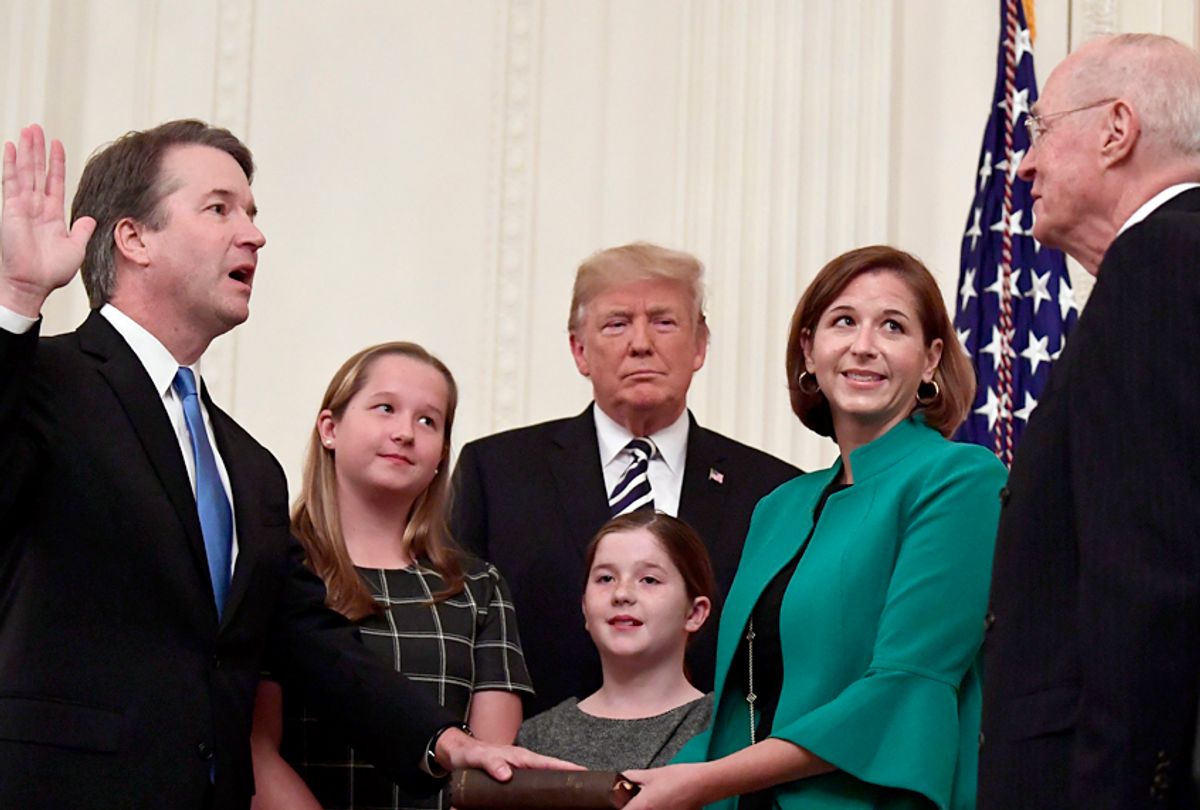 Brett Kavanaugh, freshly sworn into his lifetime appointment on the Supreme Court, delivered a primetime address on Monday meant to tamp down concerns of his rank partisanship on the bench during the most nakedly political swearing-in ceremony for a new Supreme Court justice in recent history.

During a ceremonial swearing-in event during which President Donald Trump declared the sexual misconduct accusations against Kavanaugh to have been a grave wrong, insisting that his Supreme Court pick had actually been vindicated, Kavanaugh hardly appeared independent or impartial.

“On behalf of our nation, I want to apologize to Brett and the entire Kavanaugh family for the terrible pain and suffering you have been forced to endure,” Trump said.

"Those who step forward to serve our country deserve a fair and dignified evaluation, not a campaign of political and personal destruction based on lies and deception," Trump told the audience. "What happened to the Kavanaugh family violates every notion of fairness, decency and due process."

He added that the Kavanaugh controversy revealed that in America men and women "must always be presumed innocent unless and until proven guilty." According to Trump, Kavanaugh had come out of his predicament ahead: "You, sir, under historic scrutiny, were proven innocent."

Kavanaugh followed up Trump's speech with a promise that he would try to be nonpartisan in his rulings, a far cry from his vow of revenge against the Democrats conducting the hearing against him when he testified.

"The Supreme Court is an institution of law — it is not a partisan or political institution. The justices do not sit on opposite sides of an aisle," Kavanaugh said. "The Senate confirmation process was contentious and emotional. That process is over. My focus now is to be the best justice I can be," he added. "I take this office with gratitude and no bitterness. On the Supreme Court, I will seek to be a force for stability and unity."

Despite his celebratory mood, Kavanaugh is still beset with lingering questions from his confirmation battle, including about the numerous financial debts in his background that have raised suspicion about his fitness for the bench.

One controversy that beset Kavanaugh's candidacy for the court before the sexual misconduct accusations of Christine Blasey Ford and Deborah Ramirez took center stage was brought to light by Sen. Sheldon Whitehouse, D-R.I., when he memorably asked Kavanaugh about his ability to incur expensive country club membership dues and the debts he incurred ostensibly to help a friend pay for baseball tickets.

When Whitehouse spoke to Salon about his questions last month, he characterized them as part of a larger pattern of troubling behavior and concealment of the past in Kavanaugh's background.

"Despite Republicans’ sham process for considering this nominee, Democrats are fighting to bring Judge Kavanaugh’s full record to light," Whitehouse told Salon. "After hearings full of contradictions and apparent falsehoods from Judge Kavanaugh, we still have plenty of questions about Judge Kavanaugh’s views on a wide range of issues, including the scope of presidential power and the role of government in protecting civil rights."

He added, "That’s why it’s more important than ever for the public to see the 90 percent of Kavanaugh’s record that remains hidden. When the whole truth behind his record comes out, it will help explain Kavanaugh’s troubling pattern of siding with corporate and right-wing interests over those of all Americans."